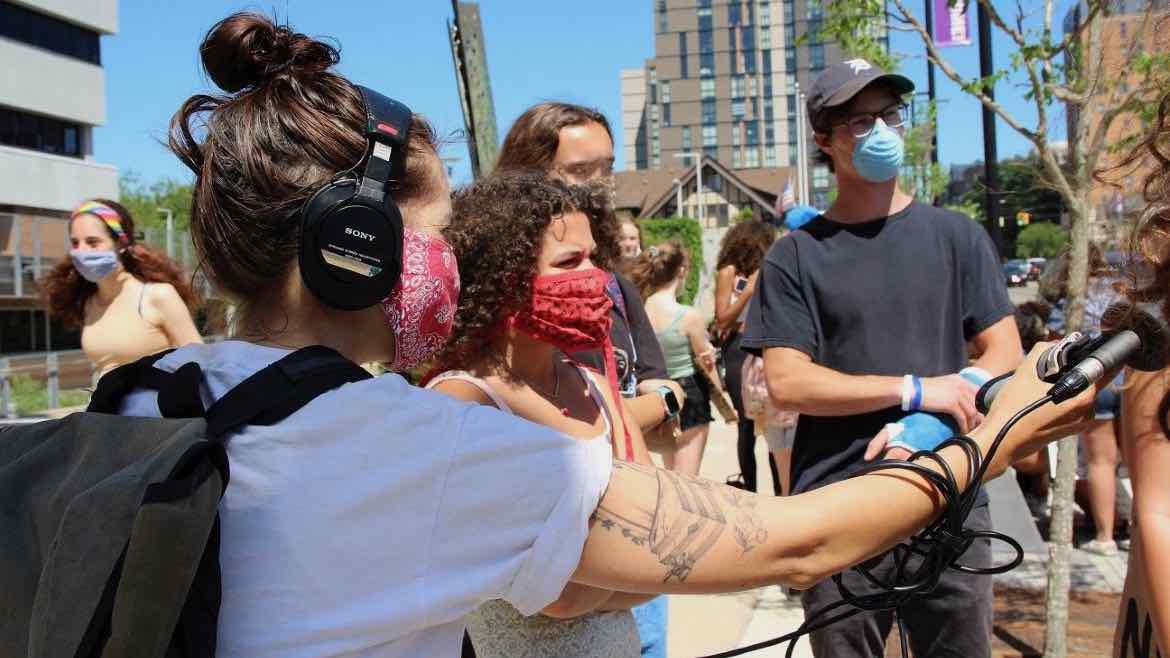 Michigan Radio is offering a window into teenage life with Kids These Days, a podcast by and for teens that aims to break stereotypes about Generation Z.

Each episode is produced by students at Community High School in Ann Arbor, where Michigan Radio’s Jennifer Guerra and producer Rachel Ishikawa taught a class on podcasting. Episodes in the nine-part student-produced series are being released throughout the summer.

Public radio has a long tradition of teaching young people to produce media that reflects their voices and their lives. Local stations offer training through workshops or in schools.  RadioActive at KUOW in Seattle introduces young people to public radio and teaches them how to produce their own stories. Last year, Aspen Public Radio produced Gen Z Tea, a youth-led podcast for teens. WNYC in New York City started Radio Rookies in 1999 and continues to hold media training workshops for youth. Their audio stories air on WNYC and have been broadcast nationally via NPR and This American Life.

Guerra pitched her idea to create Kids These Days to Michigan Radio leadership in the spring of 2019 and later approached Community High School, a public alternative school with a strong journalism program. Tracy Anderson, an English teacher and advisor for the school’s newspaper, was immediately on board. Michigan Radio raised money to launch the project that fall, according to PD Zoe Clark.

During the fall, Guerra began meeting weekly with interested students to discuss topics that would speak to Gen Z, such as the stress of applying for college. For the spring semester, Michigan Radio offered a twice-weekly class on podcasting. Twenty students signed up, committing to be part of the team that would create Kids These Days.

Once class began, the students agreed on topics the series would cover, which spanned anxiety and mental health to virginity.

When schools shut down in March for the coronavirus lockdown, students had to work more independently, and some recorded audio diaries on their phones. As the team adapted to remote work, the editorial focus remained the same, Guerra said: “what teens are thinking about, laughing about and stressing about.”

Ishikawa, Guerra and Anderson used Zoom to meet with the class weekly, check in with student editors and work with individual students on their stories.

During the class, Ishikawa and Guerra taught students how to write focus statements and build narrative structure in their audio stories. Anderson helped facilitate the project and provided additional support to the students. But the class worked as a team to produce the podcast. Three student editors acted as “the wranglers” to keep everyone on track.

The episode on anxiety featured Mira, a sophomore at Community High School who described her own experiences with anxiety. She interviewed Benj Pasek and Justin Paul, creators of the musical Dear Evan Hansen, which features an anxious teen who feels isolated.

The podcast’s first episode dealt with family conversations about race. It was released June 17 and aired in its entirety on Michigan Radio’s local daily show, Stateside. Each week, Michigan Radio presents excerpts of the latest podcast episode on Stateside or local broadcasts of Morning Edition or All Things Considered.

Mazey Perry, student editor and host of Kids These Days, said the podcast team didn’t want to focus on common stereotypes of Gen Z, such as being on their phones too much. The students wanted to provide a nuanced perspective.

“We do address the ‘We’re on our phones all the time’ type of thing, but we definitely go into more about why that is,” said Perry. “I think it opens up conversations for sure.”

Perry had already worked on the school’s newspaper, and learning how to do radio news was “a culminating experience” for her as a senior, she said. She also appreciated the opportunity to create media for her peers, who “want to listen to things that are relatable to them.”

Producing stories about “what is actually going on, not what adults think is going on, is super important,” she said. “I definitely found it refreshing to hear those points of view, because so often we really only hear from adults.”

Michigan Radio funded the project with grants from the Michigan Health Endowment Fund and The Children’s Foundation. Guerra said she hopes to produce another season at a different school and with a new group of kids.

Responses to the project have been largely positive, Guerra said. One parent commented on the episode about anxiety: “Wow, I listened with my 14-year-old who struggles with anxiety. … We think you are probably going to help a lot of kids who experience anxiety to feel like they are not alone.”

Helping teens feel less isolated and helping adults in their lives understand them better is exactly what Guerra wanted to accomplish with the podcast, she said.