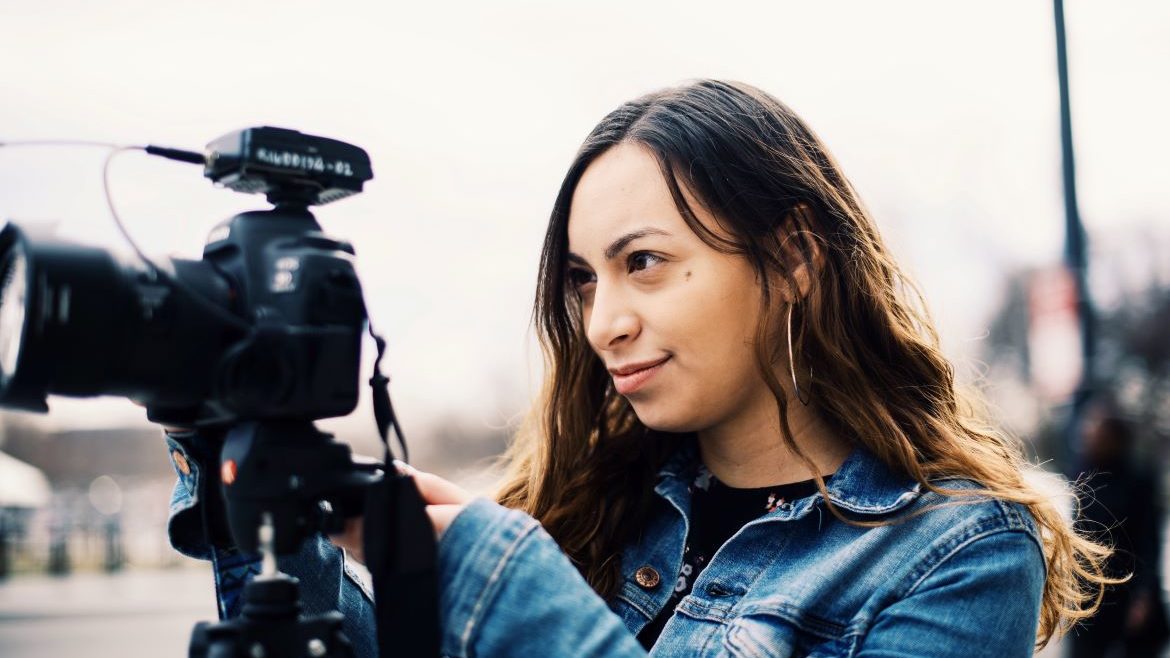 Report for America corps member Keren Carrión is reporting for KERA in Dallas and The Texas Newsroom, a collaboration among NPR and public radio stations in the state.

Report for America, the nonprofit service program that places journalists in newsrooms throughout the country, is a finalist in a competition for $100 million awarded by the MacArthur Foundation.

The global 100&Change competition will award the sum to a proposal to solve a critical issue. Report for America is one of six finalists chosen from a pool of the top 100 applicants. This year, 3,690 competition registrants submitted 755 proposals, according to the foundation’s website.

An initiative of the nonprofit media organization The GroundTruth Project, Report for America aims to eliminate news deserts in the U.S. by sending early-career journalists to local newsrooms to report on undercovered issues. The organization pays half the journalist’s salary and works with the newsroom to raise funding for the other half. Many are in public media, with 43 of the 226 currently in the field at public radio stations, according to Steve Waldman, president and co-founder.

The other finalists include the Clinton Health Access Initiative & Murdoch Children’s Research Institute, which provides oxygen therapy for children; Community Solutions, which focuses on ending homelessness in the U.S.; National Geographic Pristine Seas, which works to restore ocean health; Project ECHO, which democratizes medical knowledge and care; and the World Mosquito Program, which prevents transmissions of mosquito-borne diseases.

The next stage of the competition will allow finalists to strengthen their applications with help from technical experts through the MacArthur Foundation, according to Cecilia Conrad, managing director of 100&Change. The focus will be on scaling the proposals to the large size of the grant and bettering engagement with “communities of interest,” such as beneficiaries or policymakers, said Conrad.

Finalists will present their final proposals in the spring of 2021. The foundation’s board of directors will choose the winner.

Sesame Workshop won the inaugural 100&Change competition in 2017, and other finalists in that competition received $15 million each. Outside donors made the additional grants to finalists possible, and Conrad said she hopes that donor support for other finalists will be possible this year as well. Interested donors will also attend the 2021 finalist event.

The size of the grant “gives organizations the opportunity to think big in a way they haven’t before and focus on the great idea they’re implementing without having to worry about donors,” Conrad said.

Report for America’s rapid growth made it a good candidate as a model that can easily be scaled up, Waldman said. The program partners with existing local news organizations instead of creating new ones and works with the outlets to raise money for the other half of salaries.

The initiative’s emphasis on hiring journalists of color was another important factor, he said, with 42% of its reporters identifying as people of color.

During the next stage of the competition, Waldman said the Report for America team will consider questions such as the logistics of organizing large increases in staff and whether the initiative should also enlist experienced journalists.

RFA’s proposal doesn’t have a “fancy new twist,” Waldman said. Instead it shows how the organization will keep working to eliminate news deserts, but on a faster and larger scale. The grant resources would also funnel into the 163 newsrooms RFA is partnering with, he said.

Engaging with communities of interest is “baked into the model” of Report for America, Waldman said. Newsrooms have to show they’re listening to their communities when they apply to the program, he said.

Waldman said he was surprised but “thrilled” when he learned that Report for America had become a finalist in a field of remarkable competitors. Beyond just validating Report for America, the decision was a signal from MacArthur that the collapse of local news is on the scale of the other “mammoth issues” facing the country, Waldman said.

“The collapse of local news isn’t just a problem for journalism,” Waldman said. “It’s a deep threat to democracy in thousands of communities around the country.”

RFA is accepting applications from newsrooms, with a Sept. 30 deadline.