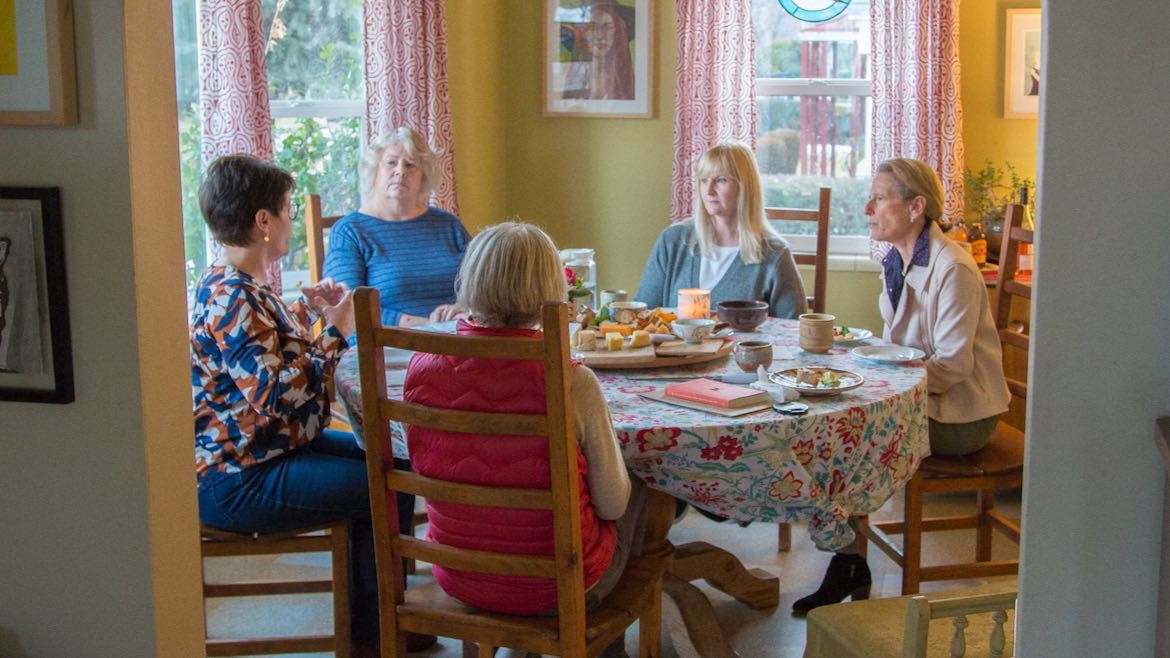 A neighborhood book group meets to talk about autism in Utah with help from PBS Utah's discussion questions.

I no longer use plastic straws. I keep glass jars for reuse. I also started sewing my own dish towels and napkins from old clothes. Why? Because after a discussion with some friends about how much American consumers waste, I (along with others in the group) made a commitment to do better.

This made me think, “If discussions like this can change my worldviews and behavior, could other people be open to change as well?” And then I turned on my community engagement brain and thought, “Could PBS Utah use public media content to initiate these discussions? Could I encourage people to start discussion groups using topics from PBS programs? That sounds hard. What if I tapped into groups that are already having discussions? Who’s doing that?”

Book clubs. That’s who. Engaged thinkers are already having organized discussions across the state on a regular basis. I mean, I don’t often take the time to read books, but there are people out there who are less lazy than I am because they’re reading at least one book a month. Would they be willing to watch a documentary paired with a book to deepen the discussion? I wanted to find out.

When PBS Utah launched Book Club in a Box in 2018, we set a goal to ship boxes to 30 book clubs in Utah. I was thrilled to receive a grant from Utah Humanities to fund the project. I chose three PBS documentaries and worked with scholars to pair each doc with a book that complemented the film.

Because it was a new idea, we wanted to start small. I did a little research with book clubs I knew and asked if watching a film in addition to reading a book sounded appealing if we provided a toolkit that included a free book, a DVD and thoughtfully prepared discussion questions from an expert on the subject matter.

Some said yes, others said no. After all, the ideas and issues we were asking them to explore in these stories weren’t light; they dove into racism, feminism, gender identity and religion. Asking people (many of whom come from privileged backgrounds) to confront themselves with questions that challenge their beliefs and worldviews is a tall order — especially for book clubs that gather primarily to socialize.

I asked an editor from a local paper to publish a piece about this project to give it a little push. I checked my email the morning the article was published and was shocked to see 30 emails in a row with registration requests. I surpassed my modest goal within hours. Because our supplies were depleted overnight, I invested more of my budget into restocking materials. We ended up shipping boxes to 79 book clubs that first year.

The overwhelming response showed me that people don’t just want to be entertained and chat with their friends — they want to learn and grow. They want to engage and make a difference. I made it my job to provide as many ingredients as I could for the hosts to cook up a space where those conversations can happen — and they’re happening. Each participant is asked to provide feedback and tell us what they learned. The comments I received the first year are memorable and poignant.

“I realized that being uncomfortable about the things I accept as normal is a good step to being more aware and sensitive to reform.”

“We all get put in boxes and are trying to escape other people’s opinions or limitations they put on us. I want to help. I’ll never understand how people dealt with discrimination, but I am moved to make a difference.”

“This discussion made me realize my privilege.”

“This discussion made me realize that as a history teacher, I need to add more women’s voices to my curriculum. And now I have a starting point.”

It was heartwarming to see such humility. I never witnessed this during a conversation following a screening with over 100 guests because people rarely admit their shortcomings in a public space full of strangers. I believe this program encourages that vulnerability because book clubs — no matter their size — facilitate an intimate and safe space for sharing due to the familiarity of the personalities and the relationships within that group.

My usual model for film screenings and community engagement events is to have an audience and a lecturer or a panel and moderator. With our book club program, the book club host serves as the moderator and the book club members act as both panel and audience. The host is empowered by our carefully crafted questions (thanks to the scholars we hire). Those who relate to the issues can share their experience, and those who don’t can listen and ask questions. I’ve heard that people are more likely to gain insight from a discussion if they can voice and express their opinions. Book clubs allow for that. Participants have the opportunity to speak and have their thoughts validated or challenged.

For our second year, PBS Utah mailed over 130 boxes. Accessibility was of utmost importance, so we chose only local documentaries that are available to stream on pbsutah.org at no cost. Topics included autism, suicide prevention, assimilation in Native American boarding schools and racism. This project began as a simple engagement idea that I hoped people would find useful. I was crossing my fingers that they’d be willing to talk about serious things. I now see that people not only want in-depth discussions, they are hungry for them.

This year we came up with a new tag line for the program: “I read. I watch. I care.” Not only do participants read books and watch films on important issues, they invest in keeping their eyes open and being aware of what they can do in their community to make it a better place. Those who use our program want to be part of something larger than themselves. Public media can help fill that role. The content we provide inspires the best in humanity; it shows us a world larger than ourselves, invites us in and shows us how to bridge divides and practice empathy.

I’ll never know if those who engage with this program use their new perspectives and understanding to make a measurable impact, just as I don’t know whether my effort to use less plastic is saving the planet. But I do know that seeds are being planted and one person’s efforts can have a ripple effect.

One of our most popular boxes this past year included the book Coming of Age in Mississippi by Anne Moody and the local documentary Utah’s Freedom Riders. Each host received a framed portrait of Dr. Martin Luther King Jr. with his quote: “If I cannot do great things, I can do small things in a great way.” As we enter our third year, my goal is simple: empower every participant in this program to believe that no matter how small their circle of influence may be, they are making a difference.

Laura Durham is the Community Engagement Manager at PBS Utah, curating engagement projects for both PBS and local productions that foster trust and value to the communities in Utah. She is also the producer of Contact, a nightly interview program that promotes local events and services from Utah’s nonprofit organizations. She has served the local community in various capacities with past roles as Vice President of the Salt Lake Gallery Association, Program Director for the Salt Lake Gallery Stroll, and as an active member of the Downtown Alliance.