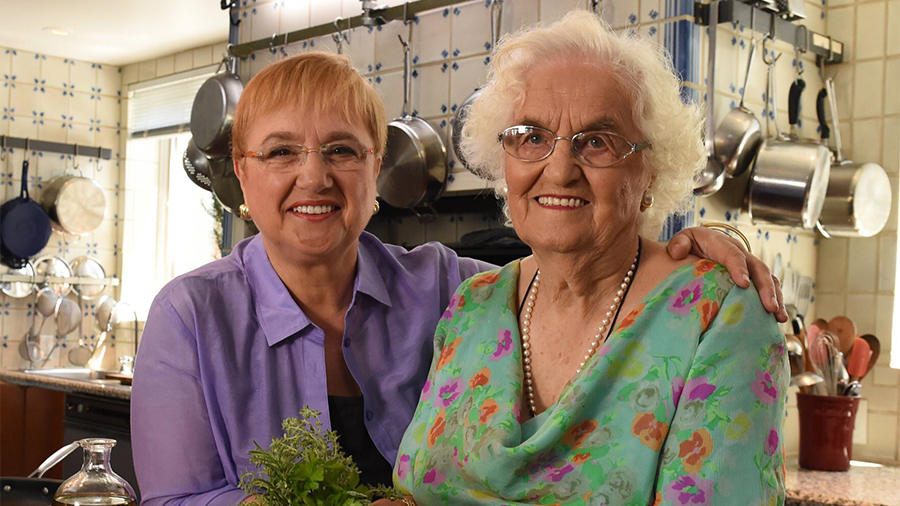 Lidia Bastianich, left, poses with her mom, Erminia Matticchio, who is featured on "Eating in With Lidia."

Chef Lidia Bastianich, the Emmy Award–winning public TV host who has cooked for two popes, has not let the COVID-19 pandemic stop her from cooking.

Like many of her viewers, Bastianich has been isolating at home. Though she lacks studio space and production staff, she said she wants to connect with her audience and help them feel as if they are part of her home. Food and cooking, she said, can facilitate connection, especially during the pandemic.

“One connecting element is that everyone is in the kitchen and cooking,” she said.

In that spirit, the entrepreneur and bestselling cookbook author and Boston’s WGBH have produced Eating in With Lidia, two 30-minute PBS specials featuring stories and recipes for cooking while at home during the outbreak. They will air back to back on stations Friday through Sunday and be available via PBS’ website, YouTube channel and video app.

The shows include interviews with Bastianich about her childhood and her philosophy of cooking at home and will showcase recipes from her previous television programs that are ideal for making at home. The first episode, “Back to Basics,” will share family stories “in both good times and challenging ones” about the origins of many of Bastianich’s recipes. The second episode, “Craving Fresh” will show viewers how to use available produce in recipes. Some recipes that Bastianich has explored while social distancing have been featured on her IGTV and Instagram Live profiles. They include fruit smash soda, a no-bake tiramisu and a method for rejuvenating leftover pasta.

Bastianich said she found inspiration for the series in the idea that she is staying at home cooking with her family, as many viewers are, and that food can be a source of connection.

“Food is nurturing,” Bastianich said. “Food is a common denominator, no matter what culture you are.”

To produce the show while practicing social distancing, Bastianich worked without a production team and relied on her family to shoot the show at her home. Her grandson filmed the interviews, and her 99-year-old mother participated in segments.

Bastianich said she found working with her family rewarding. “All of this has given me satisfaction,” Bastianich said. “Letting people come into my house, seeing the reality. There is no TV crew. It’s myself and my grandson in my kitchen.”

Bastianich said that her experience spending two years in an Italian refugee camp informed her belief in the connection between family, food and nurture. Despite the difficult circumstances, she tried to remain optimistic.

Through the special, she said, she aims to cherish and share the importance of family and food.

“There’s no better place in this whole world then at the table with the people that you love,” Bastianich said.

3 thoughts on “Stuck at home, chef Lidia Bastianich takes viewers into her kitchen with help from family”