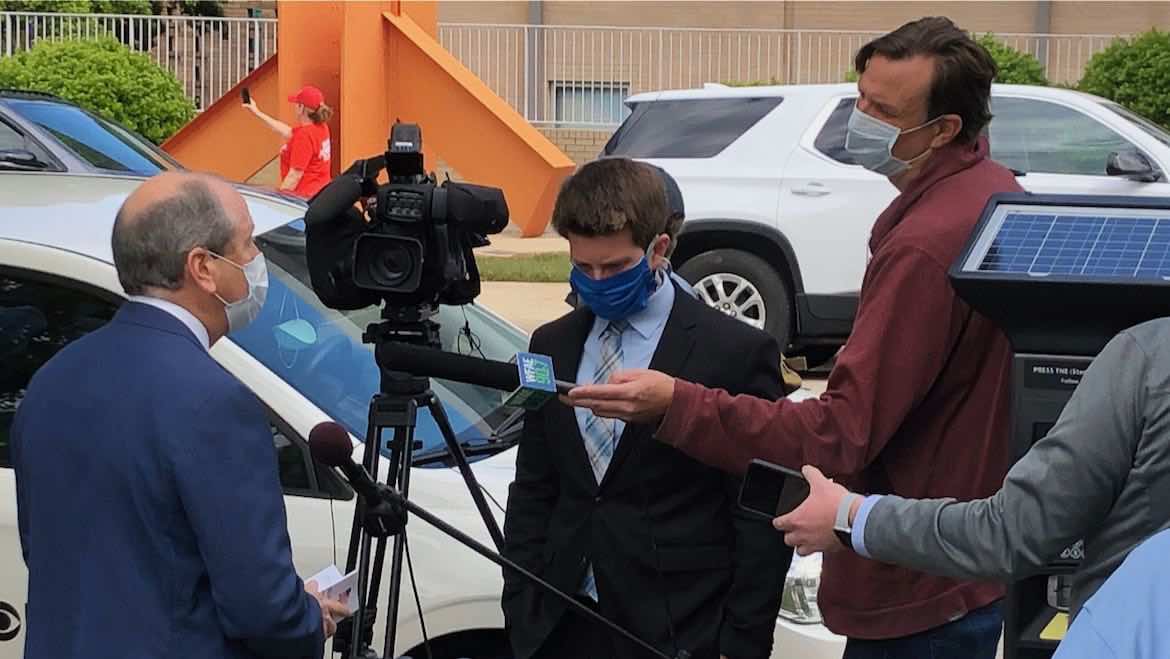 Around 50 public media stations are making a wide variety of purchases and investments after receiving nearly $2 million in grants from Facebook to weather financial challenges caused by COVID-19.

Facebook partnered with organizations including the Local Media Association and the Lenfest Institute for Journalism to identify grantees for funds from its Facebook Journalism Project, which it founded in 2017. Last month it issued $5,000 each to approximately 400 local newsrooms to cover costs associated with reporting on the coronavirus. This month, the project gave grants ranging from $25,000 to $100,000 to more than 200 organizations.

Facebook announced in March that it will give $25 million to news organizations in the U.S. affected by the pandemic. Some stations received both $5,000 grants and much larger sums, including Detroit Public Television, Cascade Public Media in Seattle and KOSU in Oklahoma City. Others, like KUER in Salt Lake City, have also received Facebook funds through an accelerator program that helps news outlets grow membership.

Station leaders say the emergency funds public media received from CPB through the $2.2 trillion stimulus package signed in March have helped but that they need philanthropy and other funding to maintain reporting and cover overhead costs.

“We had a bunch of technology needs that we hadn’t had before, so getting that grant allowed us to do some things like buy an additional Comrex unit to have both our morning and afternoon hosts completely remote,” Peterson said. “We’ve been able to buy additional Zoom memberships, boom poles, stuff we didn’t really need pre-pandemic.”

The station used its $75,000 grant for news coverage, expanding a talk show and creating a blog to cover the pandemic.

WABE, which participated in a Facebook Journalism Project accelerator last year, is also using the money to redesign its website and optimize it for mobile devices, which more than 60% of its audience is using to access content. Woelfel expects that project will be completed by Sept. 1.

WFSU in Tallahassee, Fla., received $60,392 from Facebook, said Kim Kelling, director of content and community partnerships. The station purchased a license for a new VPN system since the one used through its university licensee, Florida State University, was overloaded with so many staff and faculty working from home. The station also used the money on marketing outreach, remote kits and a stringer based in Panama City.

Stations including KUT in Austin, Texas, and Texas Public Radio in San Antonio received $100,000 grants. KUT’s grants will support a daily coronavirus newsletter, a WhatsApp initiative to reach Spanish speakers, and Spanish-language reporting, said Executive Editor Teresa Frontado. Serving the station’s Spanish-speaking audience is “even more important for us as public media stations in times of crisis,” she said, because local Spanish-language newspapers have shuttered in recent years.

Dan Katz, news director of Texas Public Radio, also said his station will use the funds to create more content in English and Spanish and expand video content.

“We’ve been doing a lot more video in the last year, especially with our border coverage in the Rio Grande Valley,” Katz said, adding that video versions of their reports are popular on social media.

Radio Bilingüe in Fresno, Calif., will use $80,000 from FJP to support its audio programs in Spanish and in indigenous Mexican and Guatemalan languages, said Executive Director Hugo Morales.

The network also received around $180,000 from the Paycheck Protection Program through the Small Business Administration, which offers forgivable loans to small businesses if most of the funds are used to retain employees. Morales said that after failing to get a loan through Wells Fargo, Radio Bilingüe got help from Citizens State Bank in Colorado, whose chairman and CEO, Doug Price, is a former president of Rocky Mountain PBS.

KYUK, a dual licensee in Bethel, Alaska, that broadcasts to a majority Yupik Eskimo population, received $99,391 in FJP grants. GM Shane Iverson said the station plans to use the funds to support Yupik translations of its reporting and to purchase equipment for remote operations.

“A majority of our audience lives disconnected from any road systems. They’re pure villages,” Iverson said. “Making sure everyone understands critical information in the language they understand best, which is Yupik to a lot of people, is really important.”

Iverson said his station is expecting approximately $146,000 in funding from the Paycheck Protection Program. The station also applied for and received $6,000 from the Alaska Center for Excellence in Journalism and the Bethel Community Foundation. The additional funds are especially important considering Ravn Air Group, a regional airline and a major underwriter for the station, filed for bankruptcy in April.

The station is also collaborating with QcityMetro, an online news site for African-Americans, and the Charlotte Ledger, a business newsletter, to share $100,000 in grants from Facebook. The money will be used for virtual town halls and for hiring two temporary reporters — one of them bilingual — and contract freelancers for data reporting. Some reporting will appear in La Noticia, a local Spanish-language newspaper.

DCist, the Washington, D.C., digital publication acquired by WAMU in 2018, will use $100,000 it received to support coverage of underserved D.C. communities, said DCist Editor-in-Chief Rachel Sadon. If DCist can demonstrate the importance of its COVID-19 coverage, readers may be encouraged to become members, Sadon said.

100 Days in Appalachia, a nonprofit that collaborates with West Virginia Public Broadcasting, online news site the Daily Yonder and the Center for Rural Strategies in Kentucky, received $75,000 from Facebook this year and is a past recipient of grants from FJP. Dana Coester, the editor-in-chief, said this year’s funds will mostly support its network of freelancers.

Coester added that applying for FJP funds was relatively simple compared to applying for funds from other grantmakers. “Normally grants can take weeks to write, and we just don’t have that luxury when you’re covering a crisis,” she said.

Some of the FJP grantees are members of an accelerator cohort that is working with Facebook over several months to analyze ways to increase membership at their organizations, said David Grant, an FJP program manager. The accelerator’s executive director is Tim Griggs, a consultant and former executive for the New York Times and the Texas Tribune.

Grant, who previously held several roles with the Christian Science Monitor, said each cohort has a healthy mix of online-only news sources and public media stations that learn from each other.

“They give and they get. What they give is this perspective of stewardship, of loving their supporters in a really meaningful way,” Grant said of public media. “Others in the program gain that perspective.”

Meanwhile, public media outlets learn about best practices for growing their digital offerings, Grant said. “What they need is a digital experience that’s as good as what they’re giving to their listeners,” he said.

“We haven’t yet formally decided how we will use our grant funding, as we’re still in the midst of the content-intensive part of the accelerator,” she said in a statement. “We’re learning digital outreach techniques and best practices, as well as brainstorming ways to use what we’re learning to improve our audience’s user experience on our digital products, and better engage with our online audience.”

KUER joined the digital membership accelerator program in 2019 after applying the previous fall, said Station Manager Joel Meyer. KUER attended conferences and received training to “up their game” and increase membership. It culminated in a $75,000 grant for KUER, Meyer said.

“The teachers and the coaches that were assigned to the different participants were not Facebook people. They were legit journalists that brought a bunch of really great experience,” he said. In KUER’s case, the station tested newsletter send times and subject lines while participating in the accelerator.

Meyer added that program managers kept the cohort connected virtually throughout 2019. Then when the pandemic began to upend life in the U.S., FJP representatives told participants that Facebook would give each cohort member a grant. The members would still need to formally apply and file a proposal explaining how they’d use the funds.

“It was clear, I think, that Facebook wanted to help people that had been part of this previous training experience,” Meyer said. “These were organizations that already had proven that they can use grant money efficiently.” KUER is using the new grant to support staff and improve remote operations.

Colorado Public Radio, received $50,000 from Facebook and will use the money on data and audience-focused technology initiatives, said Dave Burdick, managing editor for digital. He also wants to analyze how the station can increase readership for its longform news investigations, like a recent report on how the state is handling the pandemic.

“The future of local media was uncertain before this,” Burdick said. “We have to make sure we come out of this not just having survived it but in a position to do better for [Coloradans] than we did before. We just have to.”