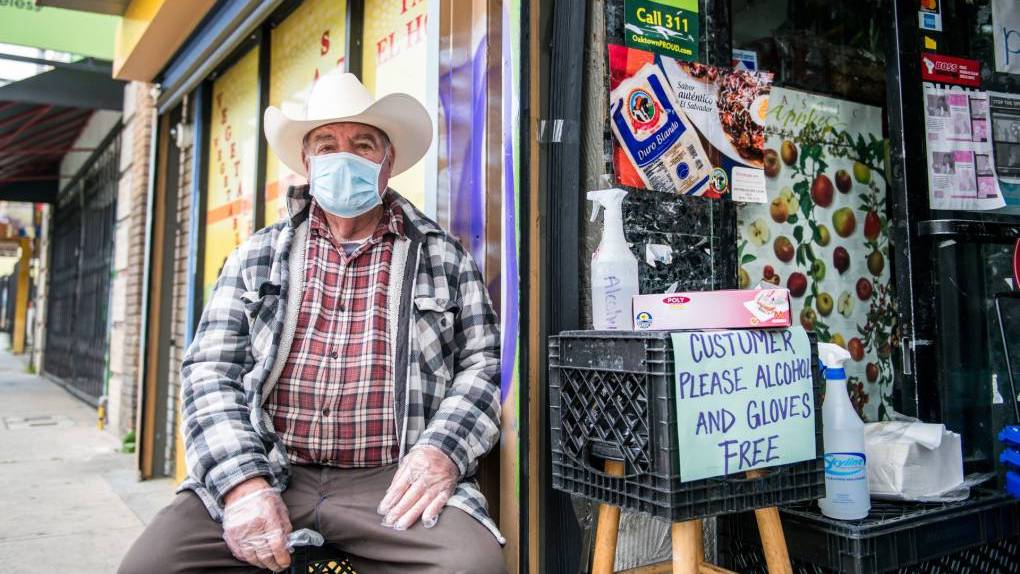 Santiago Briseño ensures that customers wear gloves and that the gloves are sanitized when they enter Mi Ranchito Market in Oakland, Calif., April 8.

In an era of social distancing, a new national radio show is seeking to connect communities across the country by focusing on how people are dealing with the COVID-19 pandemic.

America Amplified: Life, Community, and COVID-19 will air live Saturdays over the next six weeks, featuring eight hosts from seven stations during its trial run.

The show is named after America Amplified, the CPB-funded community engagement project that recently shifted its focus from the election to the coronavirus. The America Amplified team, based at KCUR in Kansas City, Mo., will provide engineering support and screen calls for the program.

“What we want in this show is to connect experiences of Americans in different parts of the country,” said Donna Vestal, managing director of America Amplified. In planning for the first episode, a host pointed out that Georgia’s governor is reopening some businesses. “I want to hear from the people there how that’s going to play out,” Vestal said. “And that is relevant to me in Kansas City and how our lives are being led here.”

The show will highlight a range of voices through live call-ins and messages stations are collecting through social media and voicemail. The America Amplified team will consult with the stations on engaging their communities.

While America Amplified isn’t producing every show, Vestal said, “the idea is that we want to have that flavor from that station, from those places, those perspectives, and have them find the voices and structure the show in the way that makes sense.”

A suggestion to interview a governor came up during an early meeting about the show. But Vestal emphasizes that the show should instead focus on “the people affected by the governor’s policies or what they’ve done to make their life work on the various topics that will be under consideration.”

Each half of the two-hour program will focus on a single topic. The first episode will highlight challenges faced by essential workers and inequalities that arise from distance learning. Airing Saturday, it will be hosted by Rose Scott, host of the midday news program Closer Look on Public Broadcasting Atlanta’s WABE in Atlanta, and Mina Kim, a news anchor at KQED in San Francisco and Friday host of the call-in program Forum.

“I wanted to really decentralize where the voices were coming from,” said John Haas, director of radio and television at Public Broadcasting Atlanta, who had the idea for the series and is serving as EP. “… So we’re hearing from different perspectives and different geographical areas.”

“Not having that centralized voice was a concern,” Haas said about using a variety of hosts. “And it was something that we had to take into consideration. But if you offer a consistently excellent product and a good conversation each week, then I think that becomes the mainstay versus a personality, per se.”

Each episode will also include hosts talking to a reporter from a third station, as well as a pre-produced piece from a reporter in a fourth community. The first episode features an interview with Jess Clark, an education reporter at Louisville Public Media. It will also feature someone who is considered an essential worker, Haas said.

[Update: Clark did not appear on the first episode, which did feature an audio diary from Megan Feeney, a freelancer hired by America Amplified to do community engagement work with NET Nebraska and other Harvest Public Media stations. Sasha Khokha, host of KQED’s California Report Magazine, also contributed a piece.]

The lineup for future episodes:

Haas emphasized that the show “is going to be national-quality” and geared towards a national audience.

“I’ve made it very clear that everything that comes on has to have resonance throughout the country,” he said. “Even though we focus on a local person or a local organization, we’re bringing them into the conversation because it resonates nationally. We don’t want people to tune out and think they’re listening to somebody else’s radio show. This is for them.”

More than two dozen stations will carry the show, including WAMU in Washington, D.C., and KERA in Dallas.

The pandemic prompted KCUR to consolidate two local shows into one focused solely on COVID-19, “but a lot of stations don’t even have the resources to do that.” Vestal said.

“In my mind, it was like, maybe this could even relieve a little bit of the burden of getting those conversations about the life we’re living that you don’t really hear on the national shows — that we could kind of pick up that load for what may or may not be happening locally,” she said.

Haas said he’s been thinking about starting a weekend show for the past few years. The seed for America Amplified came from Swap Talk, a 2017 KQED series which the station partnered with others across the country to co-host a talk show.

Haas started getting serious about the idea in February and was able to give it a test run when WABE partnered with Minnesota Public Radio in March on a national call-in show about COVID-19.

Since America Amplified was conceived prior to the pandemic, he has aspirations for the program to go beyond its six-week pilot run.

“I’m in discussion with some other stations about co-hosting down the line,” he said. “I really think that this is a show that can live in perpetuity and become a Saturday staple.”