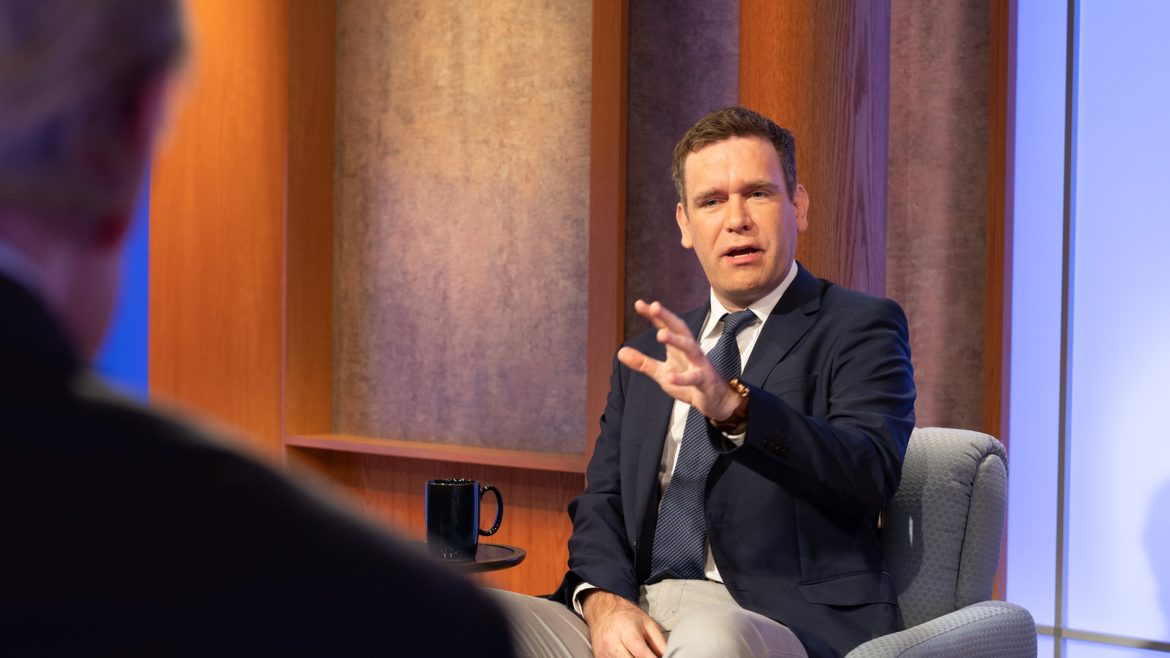 Tom Rogan addresses panelist Pat Buchanan on an episode of "The McLaughlin Group."

John McLaughlin’s combative political show The McLaughlin Group is back on public TV with a new host, some familiar faces and a mellower vibe.

The weekly forum for discussions of current events first went off the air in August 2016 following the death of its titular host. Through the efforts of two media executives with a long list of industry connections, the show has come back exclusively to public TV after a short-lived run on an ABC affiliate in Washington, D.C.

The executives behind the program’s relaunch say it’s particularly important for it to be on TV in an era of divisive politics.

“Every show opens with the line of, ‘It’s a place where friends disagree, agreeably,’” said Seth Berenzweig, CEO of Washington-based BL Media Group, which has spearheaded the show’s revival. “That’s really missing in today’s discourse and heated political environment.”

The show strategically brings together conservative and liberal panelists to hash out differences and passionately discuss the news without being “mean and nasty,” said Tod Castleberry, president of BL Media Group.

“This show represents the ability to talk about things that matter, things that affect all of us, but in a civil and respectful way,” Castleberry said.

After years of WTTW in Chicago bringing the show to public TV — it also aired on commercial outlets — Maryland Public Television is the new presenting station. Castleberry and Berenzweig arranged for Les Heintz, an EVP and director of distribution for the show, to approach MPT last year about a partnership. Heintz and Steven Schupak, MPT’s COO, have known each other for more than 20 years.

BL Media Group also approached other public television stations, but executives said they felt MPT was the best fit because of Schupak’s trust in Heintz, his familiarity with the show, the station’s proximity to Washington and MPT’s willingness to promote it as a marquee program.

Having The McLaughlin Group exclusively on public TV is also key, Schupak said. “In today’s highly competitive and crowded media landscape, it’s important that when we can say something belongs to public television, we have to mean it,” he said. “Otherwise, stations won’t want to schedule it.”

The show aired on MPT last fall and went national in January, with American Public Television handling distribution. McLaughlin is airing on 204 channels covering nearly 60 percent of the country. Stations include outlets in 14 of the top 25 markets, including New York, Los Angeles, Chicago, Dallas and San Francisco.

“It’s a program that I believe is one of those staples that resonates when you think of PBS,” said Karen Bell, TV program manager at Northern California Public Media in Rohnert Park. She said she picked up the show because she thought it would allow viewers to engage with politics in an important election year.

“I wanted to have a fresh, sort of new conversation-style news program to put into my news block,” she said. “It’s The McLaughlin Group, so it has the name and brand recognition that viewers and members would be familiar with.”

The end of an era

Premiering in 1982, The McLaughlin Group is widely credited with being the first raucous, fast-paced public affairs roundtable discussion show. It was routine viewing for a wide audience during its original run, including the bottomless pit of Washington, D.C., power brokers. The Washington Post argued that for better or for worse, it taught Americans how to argue about politics. It was parodied, perhaps honored, by Saturday Night Live.

The show’s Aug. 12, 2016, episode opened with a note from founding host John McLaughlin announcing that for the first time ever, he would not be hosting that evening. Four days later, McLaughlin died at the age of 89. He had not publicly announced his diagnosis of prostate cancer.

The show’s first return to television after McLaughlin’s death stemmed from a chance meeting in March 2017 between Berenzweig and political journalist Eleanor Clift, a longtime liberal panelist on the show. Berenzweig told Clift how much he loved the show and suggested that he could look into bringing it back to television.

In an interview, Clift told Current that she initially balked at the idea. She was ready to move on, she said, because she felt the show couldn’t continue without McLaughlin.

“I had pretty much concluded that John had taken the show with him to the grave, to be honest,” Clift said.

But she soon warmed to Berenzweig’s offer after meeting with him, Castleberry, longtime McLaughlin producer/director Shelly Schwartz and fellow panelists Clarence Page and Pat Buchanan. The team knew they needed two things if they were to move forward: a station partner and a host.

They found their host in a young McLaughlin Group producer who had filled in for McLaughlin on the August 2016 episode that the host missed due to his illness. Tom Rogan saw his first episode of The McLaughlin Group when he was 13. Rogan, a dual citizen, grew up in the United Kingdom with his American father, who watched the program on CNBC International in the 1990s. Rogan was a teenager who loved politics and history. McLaughlin’s distinctive voice and commanding personality stuck with him.

After college in London and several writing stints at publications including The Guardian, Rogan became a columnist for The National Review, the influential conservative magazine. The position not only upped his standing as a writer but allowed him to be permanently based in Washington, creating a path for Rogan’s first meeting with McLaughlin in the summer of 2014. After Rogan contacted the show and asked to contribute, the host invited him to a taping.

“He liked the combination of my British accent, my U.S. citizenship, and my Middle Eastern politics knowledge,” Rogan wrote in a 2016 remembrance of McLaughlin. “Such was his affinity for weird combinations. And that’s how our friendship — and my greatest opportunity — was born.”

At the end of the Aug. 12, 2016, episode, a teary-eyed Rogan sent his best to McLaughlin. He didn’t know then that he would be tapped as McLaughlin’s replacement with the blessing of Clift, Page and Buchanan.

Berenzweig and Castleberry used the pilot to sign a deal with WJLA, the ABC affiliate in Washington, to air a new version of The McLaughlin Group in 2018. At the time, Sinclair Broadcast Group, WJLA’s owner, was angling to acquire Tribune Media, which could have helped boost the revived McLaughlin Group to a national stage.

“The expectation was that this merger that Sinclair had in the works before the FCC was going to go through and that we wouldn’t just be a regional show … that we would be on stations around the country,” Clift said. “Because when you try to get advertising support for the show, you don’t find many people who are willing to support the show if it’s just in the DMV.”

But within three months, Tribune Media backed out of the deal amid FCC scrutiny. Berenzweig and Castleberry did not look to renew their contract with Sinclair.

“We made a decision on behalf of our client, which was the panel and the program, that we wanted to go back to the drawing board rather than asking to renew a contract with Sinclair since the Tribune deal was off the table,” Berenzweig said, adding that the relationship ended “very amicably.”

Without the ability to go national, the show’s future appeared bleak. Castleberry and Berenzweig decided to pursue public TV with the continued blessings of McLaughlin’s estate. In early 2019, they posted a message on the show’s website: “Exciting news coming soon — we are taking a brief hiatus on-air and will have a major announcement coming soon.”

The show’s new introduction alludes to its history while looking forward: “From Washington, The McLaughlin Group, the American original! For over three decades; the sharpest minds, best sources, hardest talk.”

A January taping of the show at AARP Studios in downtown Washington featured panelists Clift, Page, conservative commentator Shermichael Singleton and American Conservative editor Jim Antle, filling in for Pat Buchanan. Off-camera, the pundits engaged in calm chitchat, saving their slings and arrows for the air.

The revamped McLaughlin is a calmer affair, lacking the shouting that made its precursor notorious. When McLaughlin held court, he often pushed panelists to give one-word answers to his questions. Rogan allows more room for elaboration, bringing McLaughlin’s essence to the show while not seeking to imitate him.

On one episode taped that night in January, discussion touched on topics including the World Economic Forum, globalism and disease control. Clift, who had bronchitis, referred to her illness to bring up the coronavirus, saying that discussion of multinational responses to any problem requires governments that are willing to work together.

“I would just hope that President Trump pays the same amount of attention to this that President Obama did when the Ebola virus broke out,” Clift said.

Following Clift’s lead, Rogan coolly asked Antle, “To Eleanor’s point there to the coronavirus, isn’t that a very good example of where global multilateral structures are fundamentally important to resolving an issue?”

The panelists sparred over the effectiveness of multinational alliances, including NATO, the United Nations and the Centers for Disease Control and Prevention, but no one raised their voice, and crosstalk was rare. It was a far cry from the scenes parodied by SNL.

Clift told Current that she’s fond of Rogan as host. “There’s no way he can be a pretend John McLaughlin, barking out questions,” she said. “He’s finding his own way and getting more comfortable inserting his own opinions without veering into McLaughlin-esque rhetoric.”

Much as McLaughlin created a persona, Clift said, Rogan is doing the same “with his funny socks and his British accent.”

The new show also stands apart in its embrace of platforms beyond broadcast TV. Additional segments for YouTube featuring spontaneous chats are reminiscent of Real Time with Bill Maher’s “overtime” clips. Producers are considering taking the show on the road and taping it live around the country.

Audio of the show is distributed as a podcast and airs on 40 commercial radio stations through Cumulus Media’s Westwood One. Distribution as a podcast expands the show’s reach on platforms that may appeal to younger audiences, said Schupak, who is also interested in developing Rogan as a host to connect with viewers beyond the TV show.

Even if the show’s panel changes as its members near retirement, one thing is for certain: The McLaughlin Group made history on public TV, and it’s important to have it back exclusively, Clift said.

“We look poised to be successful, but I don’t want to oversell it,” she said. “We’ll see.”

6 thoughts on “Where friends disagree, agreeably: How ‘The McLaughlin Group’ returned to television”