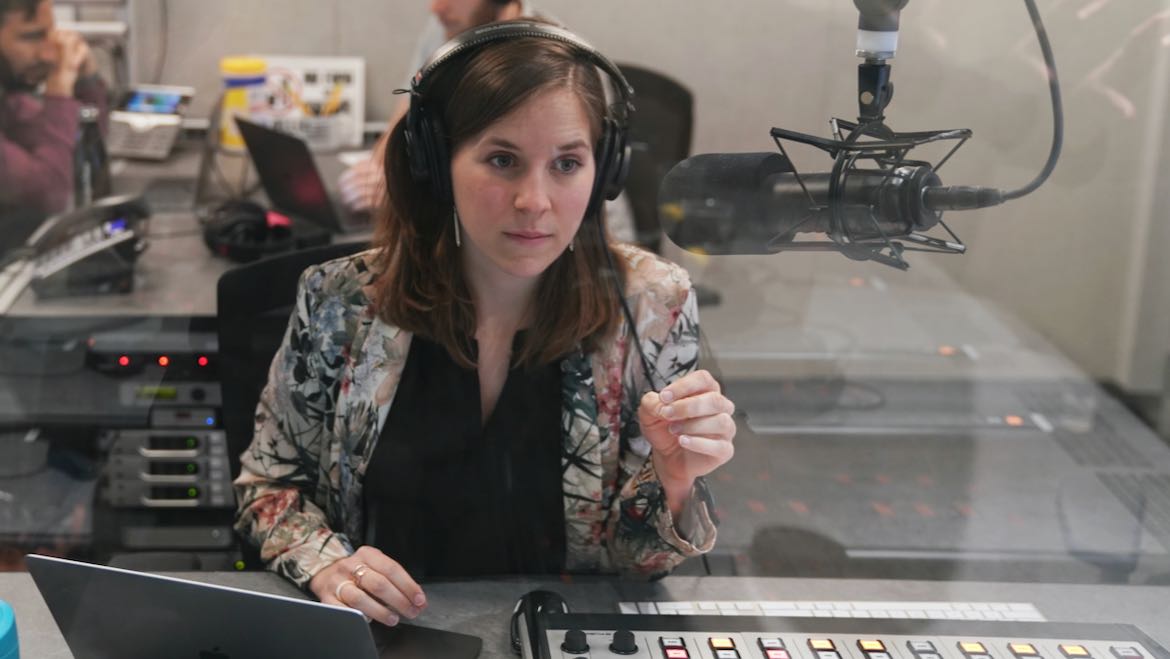 Clare Toeniskoetter, a producer for the New York Times' "The Daily," works on an episode of the podcast and radio show.

Public media have a real lead in the podcasting arena — which is burgeoning. But can public media hold that edge?

That’s the question we look at in a recent article that we and our graduate students, Atika Alkhallouf and Jiji Majiri Ugboma, just published in the International Journal of Communication.

If you look at the top 20 podcasts in terms of audience size,

a lot of them — currently, by our count, 17 — fit nicely into the mission of public media. In fact, we argue that it’s worth using a concept like “public podcasting” to describe not only all those NPR and station-produced podcasts but also mission-adjacent work done by journalistic outfits. Think The Daily from The New York Times.

These are the podcasts that are rich in fact-checked content, that are relevant to issues of public concern, that go beneath the headlines of issues, that extend the range of knowledge. They’re Up First, This American Life, Planet Money, Hidden Brain, Wait Wait…Don’t Tell Me! and many more, including many far below the top 20 but with valuable niche audiences.

They are part of a podcasting ecology that makes a positive difference in people’s lives. Podcasts that get people out of prison or get their cases reheard, that stir awareness and further discussion, that serve underrepresented constituencies, that explore the underreported. We even did a little comparison between topics covered in recent top-rated public podcasts and topics of top concern for Americans in monthly Gallup polls and discovered a nice overlap.

But the podcasting business is changing at the speed of sound. There’s a pivot toward profit. And while that’s great in the short run for public podcasting, it also attracts new players and an aggressive new business model.

Public podcasts that often started as spinoffs or experiments are becoming lucrative. NPR recently projected that podcasting would account within three years for 20% of its revenues. In public-broadcasting–adjacent venues, The Daily reportedly made millions last year, and Slate draws half its revenue from podcasting.

Indeed, the revenue from advertising is growing enough to put podcasting on the front burner of a lot of investors’ concerns. We’re watching a move away from the direct-to-consumer ads (mattresses, stamps, underwear) toward standard ad buys, and away from announcer formats to conventional commercials.

But as revenues begin to look promising, other kinds of podcasts and players are leaping in. Venture capital has come to podcasting. IHeartMedia, the biggest terrestrial radio broadcaster in the U.S., is aggressively promoting its often-lightweight podcasts on its stations in an attempt to become the most convenient one-stop shop for audio advertising. You can already see cheesy, cheap programming in top listening categories such as comedy, true crime and sports, and the growth of fact-free opinion in the right-wing political space.

The big news is in what the academics call “platformization.” This is the tendency for media to appear on platforms that media makers do not control. Think Apple Podcasts, Amazon Prime Video and Google Play. Spotify, a platform that has come to prominence with music, came to podcasting in a big way in 2019. It bought Gimlet Media, a company built by public broadcasting veterans; signed other big names; struck a deal with the Obamas’ Higher Ground Productions; and started its own podcasts.

A new, venture-capital–backed company, Luminary, signed some big names, including folks incubated by public media like Noah Feldman and Adam Davidson. It plans to use a subscription model. (These “platforms,” of course, aren’t just platforms but hybrid companies that control some content as well as conditioning terms of access for content they don’t control.)

What people worry about

Podcasters have long both celebrated and bemoaned the decentralized environment of podcasting. Podcasts are historically distributed via RSS feeds, and listeners have to find those feeds and connect with them (often through an app that makes it easier to do so). But platforms are changing that environment, even when they don’t have exclusive rights to the podcasts.

Some believe centralization is coming, which may put the public podcasting ecology at risk at an infrastructural level. Here are the worries prompted by platforms:

So how concerned are public podcasters about platformization? We talked to a handful of executives and read interviews with more of them. We did a scan of the trade press, including Current. We couldn’t find a lot of either concern or action in the public podcasting ecology.

Yes, there are active conversations in public broadcasting about the possibility of drifting from mission with growth of revenues not tied to CPB restrictions, and about the continuous brain-and-skills drain out of public podcasting to commercial enterprises. But we didn’t hear much on the subject of platformization except a forlorn hope that platforms wouldn’t dominate. And this out of a service that inherently has serious limitations on its ability to mobilize a defense, because of the profound decentralization of its operations.

Looking in from the outside, we think public broadcasting has extraordinary assets. It has talent, committed audiences, radio stations to cross-promote, a stellar reputation that sounds great to advertisers, a capacity to innovate technologically, and a lot of banked storytelling that could make great spinoff properties. And we definitely believe that public podcasting is a powerful and constructive media force for public knowledge and action.

But we also think that coordinating to look at platforms and their implications for the future is in public broadcasters’ interest.

If you’d like to know the details, our story is here, and since the journal is open-access, it’s free. We’d love to continue the conversation and learn more from you.

David Lieberman is an associate professor in The New School’s graduate Media Management program. Previously he covered the media business for 30 years at publications including BusinessWeek, USA Today, and Deadline.com.

Patricia Aufderheide is University Professor in the School of Communication at American University and a member of the board of directors of the Independent Television Service.

One thought on “Can ‘public podcasting’ maintain its lead?”