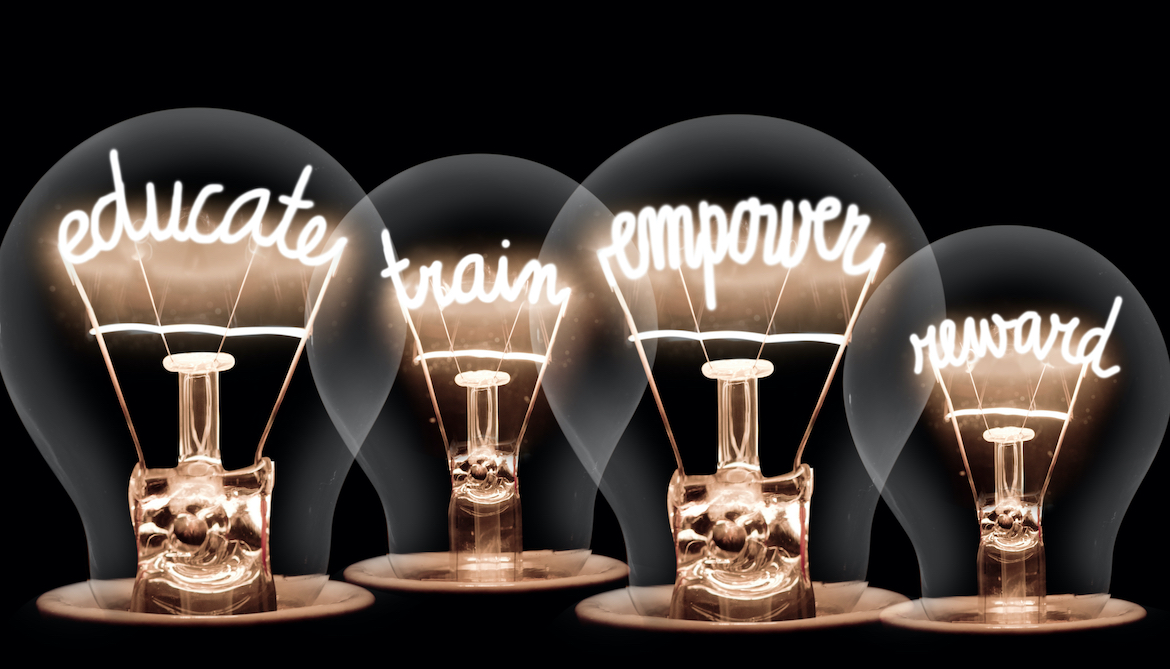 The survey was coordinated by Tim Eernisse, VP for education at the National Educational Telecommunications Association. In completing the survey questions, respondents also submitted about 1,400 comments, many of which were so negative that Eernisse said he had to edit them to include them in a presentation of the survey results. He keeps a printout of one comment hanging in his office as motivation for him to keep striving to act on the findings. It reads: “I’d really be surprised if this does any good … to be honest. Lack of opportunity after four years has me job searching.”

I was not surprised by the survey results when Eernisse shared them with me. After five years of leading Public Media Women in Leadership, I have seen and heard similar responses from women many times. I’ve become even more committed to advocating for leadership training in public media because I’ve seen firsthand the results from investing in people.

I am heartened when I hear participants say PMWL has given them hope and encouraged them to stay in public media. But I’ve also heard many women express frustrations and incredulity about the lack of leadership training beyond what PMWL is providing. Many say this has led them to consider leaving public media.

It’s troubling that in an industry with nearly 20,000 people, the employees who seek career-path counseling, leadership development and diversity/inclusion training aren’t able to find what they need to build their skills and careers.

I recognize that the price tag of providing such resources makes leaders at many public media stations want to turn away. But research shows the long-term rewards for investing in people include significant savings over time spent on recruitment, HR and legal expenses, and improvement in morale for the people who stay with the organization. There’s also a halo effect in how employees describe their work experiences to friends and family.

According to HR Magazine, companies that invest $1,500 per employee for training see an average of 24% more profit than companies that spend less. Additionally, 35% of millennials prioritize comprehensive training and development programs as one of the top benefits they want from an employer, according to a PwC report. This stat carries even more weight when you consider that hiring someone can cost 30% of the new employee’s salary in the first year. So it pays to keep staff trained, engaged and feeling appreciated.

Based on my experiences leading public media organizations, these are my recommendations for how our industry can approach these challenges:

PMWL launched with a pilot mentorship program in 2015, and I’ve been reflecting on what we’ve accomplished in five short years — for the women who have participated and for the system as a whole. The pilot started well before we received a generous grant from the Wyncote Foundation to expand our program with staff and mentor software.

For the pilot, we set up mentorships for five women. I recently interviewed three of the first five mentees to learn how the program impacted their public media careers.

Sara Robertson, SVP of production at KLRU in Austin, Texas, had this to say about her mentorship experience with Joyce MacDonald, current CEO of Greater Public:

The biggest impact was I recognized the power of mentorship. It’s become a priority for me to pass that onto others. … I make space for women and people of color because I’ve seen the impact, I see that’s where the work is needed.

In my current job, it gave me networking and coaching that has helped my career advancement and that contributed to promotions. Mentorship is having someone help you visualize that you can do this by sharing her own experience. The program changed my whole perspective on mentorship, it’s now a part of my life.

Robertson and other mentees told me they’re now paying their experiences forward to help others learn and grow in their public media careers. To me, that illustrates the power and long tail of investing in mentorship.

In 2018, after the Wyncote Foundation invested in our plan to expand the program, PMWL created a three-year mentorship and engagement program. It has now served nearly 100 women and led to other partnerships and sponsors. Last year, Joyce MacDonald invited PMWL to host Brave Talk, the first conference for women in public media, as part of the Public Media Development and Marketing Conference in Dallas. With Greater Public’s generous in-kind support, we provided an incredible experience to nearly 150 women. We plan to host another conference again this year, on July 24, after the PMDMC in Atlanta.

CARS, our founding sponsor for Brave Talk, has stepped up to support our fifth anniversary activities with a year-long partnership that allows us to offer more virtual and in-person training and field the first survey of women’s work lives in the industry.

In addition, Paula Kerger and PBS are sponsoring PMWL to host Break Through: Women. Tech. Leadership — the first pre-conference workshop for women at TechCon, on April 14 in Las Vegas.

What began as a grassroots, volunteer-led passion project has become a movement in our industry because partners within and outside of public media see the potential of investing in diversity.

I am convinced that PMWL — and other programs that train and provide safe spaces for underrepresented groups at stations and organizations — are more important than ever. We only have to look at the responses to the NETA survey and the representation of women and people of color in top public media leadership jobs. In 2015, 25% of GM/CEO jobs were held by women. For people of color, the percentage in GM/CEO roles was about 12%. Today, the percentage of women in top leadership jobs has dipped to about 20%, according to the data we’ve tracked for PMWL.

I was recently approached by a recruiter searching for female candidates for a CEO job at a midsized station. The pay was good, and the station was well-run. Of 29 candidates, he only had one woman in the applicant pool.

When we look at how public media can diversify our leadership — which is one of the most important ways we can ensure that our organizations reflect the communities we serve —  the most critical step we can take is to find and develop diverse rising stars.

Research shows that men will apply for jobs if their experiences match about 60% of the criteria, whereas women feel the need to meet 100% of the criteria to apply. Studies also have shown that when people don’t see themselves reflected in the jobs they’re interested in, they may hesitate to apply or take a leap of faith.

As PMWL celebrates its fifth anniversary and establishment as a 501(c)(3) nonprofit organization, we are embracing the brand “Empowering Public Media.” One of the definitions of empowering is to “Make (someone) stronger and more confident, especially in controlling their life and claiming their rights.”

I urge my fellow public media leaders who care deeply about the future of our industry to join me, PMWL and PTMMG to both understand and create opportunities for millennials and Gen Zs to build careers in public media. It won’t be long before it’s their turn to lead our stations and organizations. The best thing we can do to ensure our own legacies is to prepare them to succeed when they enter the C-suite.

Deanna Martin Mackey is president of the Public Television Major Market Group, a consortium and leadership organization for stations in the largest markets in the United States, and founder of Public Media Women in Leadership, which provides mentorship and training for women and addresses gender inequality in public media’s executive ranks. She worked at KPBS in San Diego for 25 years of her career, leading the station as COO and station manager during an expansion of its newsroom and digital operations.