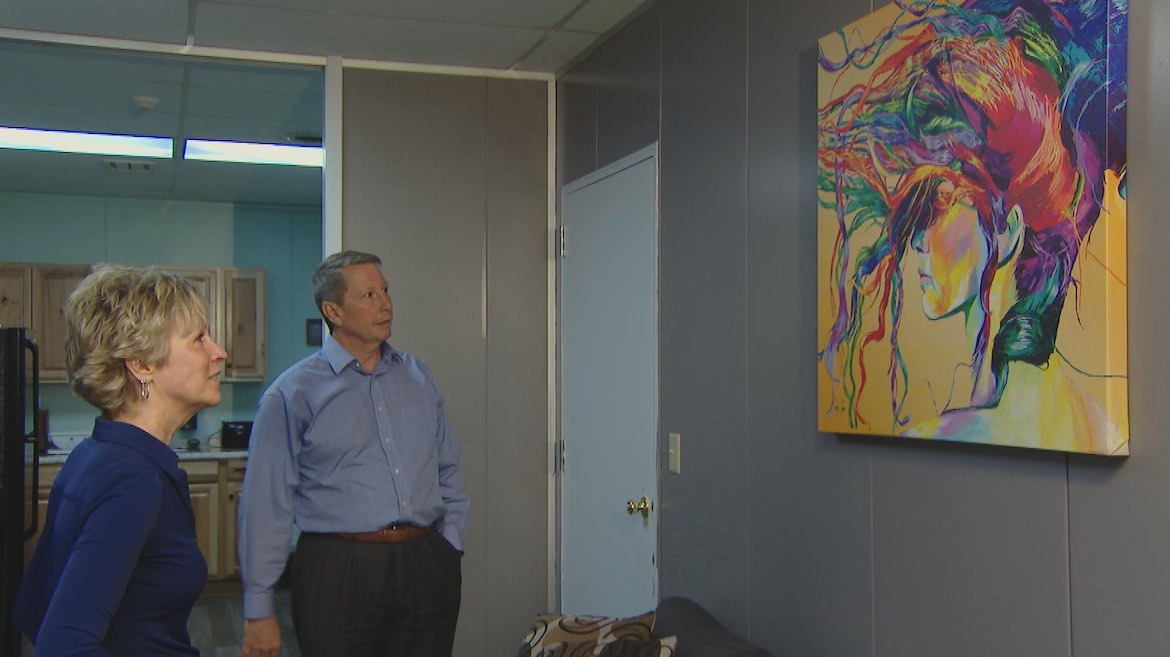 Beth Theis, left, and Bill Wall view a painting in the retreat they established within a treatment center. The couple discussed their son's struggle with opioid addiction in Battling Opioids.

In our series on innovative and replicable content and engagement strategies submitted to Local That Works, this profile summarizes an unprecedented partnership among seven public TV stations to participate in a statewide response to the opioid epidemic. Battling Opioids, a project of Pennsylvania Public Media, was one of four finalists in the 2019 contest.

What is Battling Opioids?

A multiyear, multimedia collaboration of Pennsylvania’s public TV stations to address the epidemic of opioid addiction across the state.

A series of prime-time TV specials is at the center of the production, but the content and engagement strategy includes digital videos, a podcast, Twitter chats and in-person events. Seven participating stations agreed to share resources to produce the content.

The TV programs focus on personal stories of hope and survival and direct viewers to a 1-800 number for Pennsylvanians seeking help. Video clips presented during the Local That Works contest featured first-person accounts from Alexis Johnson, a woman in recovery, and parents whose son died of an overdose at age 33. Beth Theis and Bill Wall honored the memory of their son Chris by creating a retreat for people seeking treatment for addiction.

“These are tough stories … and we felt it was important to broaden our geographic focus from all over the state so that all felt and were legitimately local,” says Deb Acklin, president of WQED in Pittsburgh. “It means a lot to us … when people trust you … to tell their difficult life stories.”

What big idea inspired the stations to collaborate on this?

“We had a crisis in Pennsylvania and West Virginia,” Acklin says. “It was severe, and it was extreme.” In 2016, the year before the collaboration began, 13 people died from opioid overdoses every day in Pennsylvania, according to a 2017 report by the Drug Enforcement Administration’s Philadelphia Field Division.

CEOs of the seven stations wanted to participate in a statewide response to the crisis that Pennsylvania Gov. Tom Wolf prioritized when he took office in 2015. The governor made a commitment to tackle the opioid epidemic by allocating more resources, including by providing funds to the state’s public broadcasters.

Station leaders, who had been holding informal weekly conference calls, agreed to work together and with state agencies to develop a content strategy. “This is the first time the seven stations have brought our resources together to tackle a statewide crisis,” says Mindy Cronk, project manager at WVIA in Scranton. One of their goals was to demonstrate the difference that Pennsylvania Public Media could make in addressing a critical statewide issue.

Since staff of the stations didn’t have expertise in opioid addiction or treatment, they “fanned out across the state to meet with experts, not only to educate ourselves but also to create the kind of partnership that this collaboration required,” Acklin says. Those consultations, completed in early 2018, shaped a programming and engagement strategy that directed audiences to state and local resources for treatment and recovery.

How did Pennsylvania Public Media fund and staff this?

At first, stations drew on their own resources and staffing, retaining SteegeThomson, an outside marketing firm, for additional support. Last spring, PPM hired two full-time staff who are based at WVIA: Cronk, project manager, and James Donnelly, marketing manager.

The state of Pennsylvania began providing annual funds to the stations in 2018. As of 2020, state support of the stations totals $1.75 million. Each station makes its own budget decisions about allocating state funds to Battling Opioids. The Geisinger Health Foundation also provided a total of $300,000 to the project in 2018 and 2019.

What content did Pennsylvania Public Media produce for Battling Opioids?

Statewide broadcasts began in March 2018 with Broken: Women – Families – Opioids, produced by WQED in Pittsburgh. That fall, Pennsylvania Public Media launched Battling Opioids with a website and the premiere of the first primetime special. Content created for the multimedia collaboration includes four primetime TV programs, 25 video stories on the Battling Opioids website and social media channels, two Twitter chats with local and national opioid treatment organizations, a podcast that launched last May and includes news coverage and interviews, and interstitial spots about substance abuse prevention and treatment and reducing the stigma of addiction.

The stations also participated in and produced live events across the state, including the PRO-ACT National Recovery Walk in Philadelphia, an event for legislators in Harrisburg, a student athlete summit and Drug & Alcohol Awareness Expos.

What has been the impact of this project so far?

As of late January, Battling Opioids had helped generate more than 31,000 calls to the state’s opioid helpline. Broadcast programs and interstitial spots had reached 9 million television households within the state. The DEA’s Philadelphia division reported that opioid addiction rates in the state had dropped 18% from 2017 to 2018.

“Our collective effort is now viewed as a critical state resource sharing reliable, unbiased information,” PPM said in a project summary. “Our stations have become a valued partner for service organizations across the state. Our programs and social media communications raised awareness, encouraged hope and created space for greater understanding.”

What difference has this collaboration made for the stations?

It has built trust among the stations and recognition that working together has helped them all adapt to changing technology and demographics. Participating stations also learned how to work together to raise funds, including corporate support, for a major statewide project.

How do you plan to improve on what’s been accomplished so far?

PPM plans to continue producing and broadcasting up to three specials annually if the stations can secure funding at current levels. The next primetime broadcast of Battling Opioids is scheduled for April. The stations expect to tweak other elements of the content strategy.

The stations are discussing additional collaborations that build on the foundation of Battling Opioids.

This profile was adapted from Pennsylvania Public Media’s project summary and a presentation by Mindy Cronk and Deb Acklin at the 2019 Public Radio Super Regional conference. You can find more ideas for local content and engagement strategies by exploring our Local That Works database.