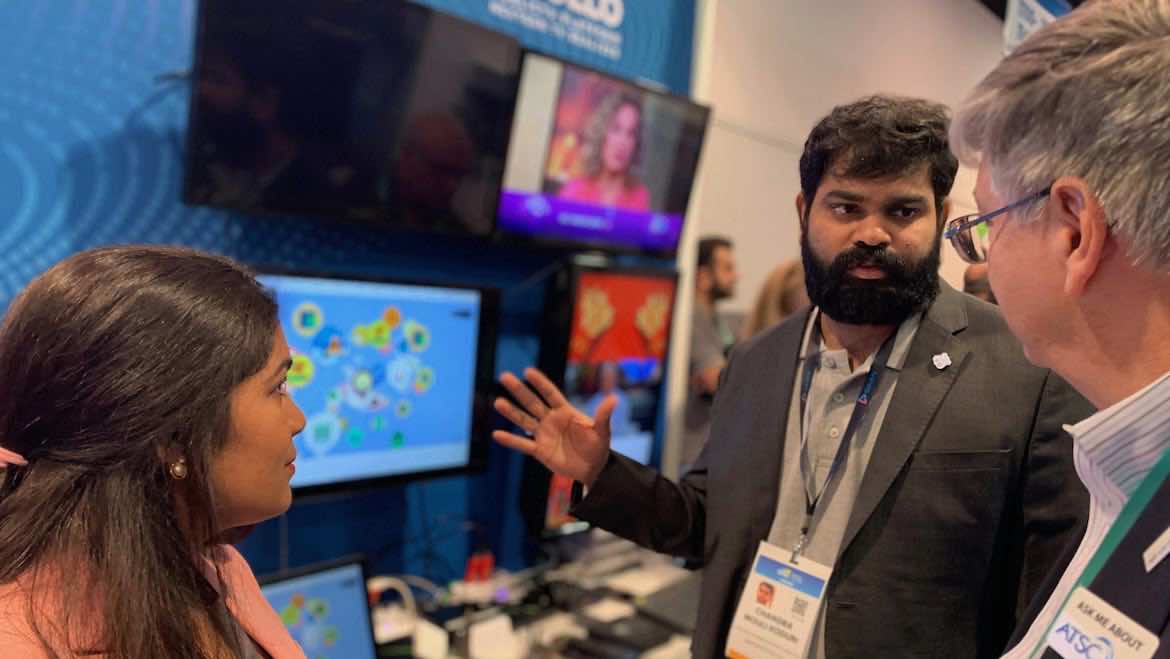 Michigan State University’s WKAR-TV is launching a project that aims to speed up public TV’s transition to ATSC 3.0 as the broadcast standard slowly emerges from the laboratory and becomes a reality for consumers.

The Apollo PublicTV Platform, unveiled Jan. 7 at the Consumer Electronics Show in Las Vegas, is a partnership between WKAR and Gaian Solutions that includes inexpensive receivers for the consumer marketplace and a suite of new technology that promises to allow stations to experiment with ATSC 3.0 features even before they fully convert their transmission chain from the existing ATSC 1.0 system.

The project grew from WKAR’s NextGen Media Innovation Lab, which has been experimenting with ATSC 3.0 since 2018, said WKAR GM Susi Elkins. WKAR secured an experimental FCC authorization to operate two transmission chains simultaneously, one in ATSC 1.0 to serve its existing audience base and another in ATSC 3.0, initially receivable only by a handful of test receivers.

That allowed WKAR to begin testing features promised by ATSC 3.0, including interactivity, enhanced 4K video quality and dynamic ad insertion. But Elkins said it quickly became clear that there was a need for a less expensive way to bring those features to a wider prospective audience of other broadcasters eager to learn about ATSC 3.0.

“Even our own staff members were still having trouble understanding what the next-gen experience is going to be like and what they need to do to get educated,” Elkins said. “Could we create some microlabs and kind of flip the model — instead of bringing other stations into WKAR, take the microlabs out, so that stations could have access to our broadcast chains,” she said, without the expense of building out a complete second transmission facility for ATSC 3.0.

That’s where Gaian, based in San Jose, Calif., and Hyderabad, India, entered the picture. The company was already developing cloud-based applications that replicated many of ATSC 3.0’s features using IP-delivered video. As Gaian worked on ways to distribute the data those applications required, CEO Chandra Kotaru said, they realized those same data streams could be inserted into existing ATSC 1.0 broadcasts, allowing ATSC 3.0 features to be added to existing transmission systems as a transitional step along the way to full operation.

The Gaian-built tuners, which the Apollo project plans to offer to public TV stations to distribute to viewers, are based on a “3-in-1” design — an inexpensive Android-based operating system that can pull video, audio and ancillary data over an internet connection or the airwaves through a USB-stick ATSC 1.0 tuner. Kotaru said the receiver itself currently costs about $30, plus $15 for the ATSC 1.0 USB tuner.

Once the price of true ATSC 3.0 technology drops and stations begin to convert their transmission systems, Kotaru said, consumers can simply open the Gaian receiver, discard the ATSC 1.0 USB stick and replace it with a USB-based ATSC 3.0 tuner stick, taking advantage of the bigger bitstream and more robust mobile and home reception that true ATSC 3.0 promises to offer.

While Gaian’s system is proprietary and not part of the official ATSC standards, Kotaru said ATSC officials have encouraged its development, including an exhibit of the Gaian/Apollo technology at the ATSC booth at the CES show.

While the Apollo system isn’t fully backward-compatible with existing ATSC 1.0 receivers, Kotaru said viewers won’t be left in the dark. On current ATSC 1.0 tuners and TVs, viewers might see some subchannels replaced with a slide letting them know that those channels’ content has moved to the Apollo system and that they can get a tuner to receive it by donating to their public TV station.

Once viewers obtain and connect the Gaian/Apollo receiver, they’ll have access to enhanced technology like 4K video (using the higher-efficiency video encoding system of ATSC 3.0, but fed over an ATSC 1.0 bitstream), integration with municipal “smart city” data systems, and other features that Elkins hopes stations will get busy developing in partnership with WKAR’s lab.

At WKAR, some of those features have included advanced emergency alerting, interactive apps to promote local arts programs in and around central Michigan, and interactive layers on top of Curious Crew, a children’s program WKAR produces. The station’s next projects include a deeper exploration of what fundraising might look like in the next-generation TV environment, including the ability to offer exclusive pledge-free programming for members.

“Let’s try to create the lowest barrier to entry so that the most stations can participate and get it in the hands and the minds of their most creative and important people, which is their employees, and the ones that know their communities best,” Elkins said. “For us, when we started using the [Apollo] platform, finally I was able to bring staff members in, and their brains just started clicking immediately.”

Elkins said she’s looking forward to sharing more about the Apollo project at upcoming events, including the APTS Public Media Summit in February and PBS TechCon in April. “APTS intends to play an active role in familiarizing stations with the Apollo PublicTV Platform,” said Patrick Butler, APTS president and CEO.

“Here’s an easy entry point for stations to get started in next-gen TV,” Elkins said, “whether I am just very new to the concept or whether I’m ready to start providing services today. I think every station will decide for themselves what they need to be doing right now to take one step forward, and my hope is that this platform and our work in the lab gives them a little stepping stone.”

Correction: A previous version of this article gave an incorrect name for a WKAR children’s show. It is Curious Crew, not Curiosity Crew.