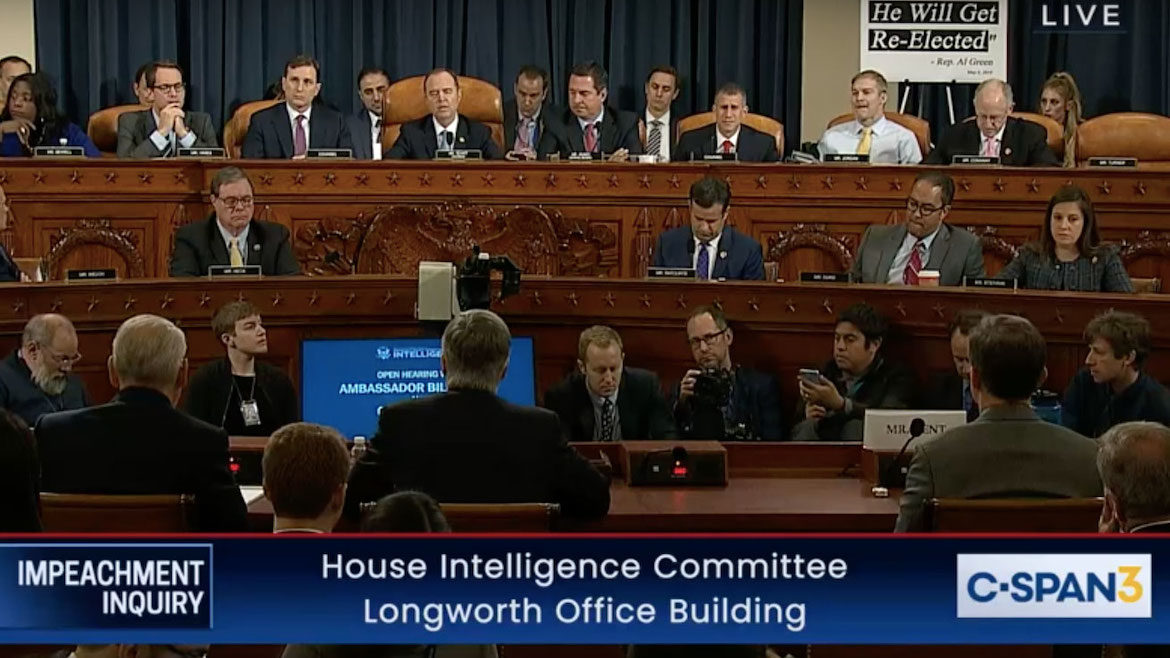 Public TV stations are taking a range of approaches to presenting the impeachment hearings beginning this week, while veteran journalist Bill Moyers continues to push them to rebroadcast the coverage on their main channels in prime time.

PBS is providing stations the hearings, which begin Wednesday, live on its main feed. But it will distribute prime-time rebroadcasts via the World Channel, which covers 65% of the country. Stations may still opt to air the rebroadcasts on their primary channels.

To Moyers and Michael Winship, a senior writer for BillMoyers.com, this strategy falls short. In a New York Times ad Friday and a column on Moyers’ website, they urged PBS to repeat the broadcasts in prime time, just as it did during the impeachment hearings for President Nixon in 1973.

“Other networks carried the hearings, too, but what set public broadcasting apart was the decision to air them twice a day: live, in real time as they happened, and then via videotape in prime time every evening, when people who had spent all day working could come home, watch the drama play out without intrusive commentary, and feel a part of the process of judgement,” Moyers and Winship wrote in their Times ad.

“Raise your hand if you have ever found a show on World?” he asked. “How in the world — no pun intended — does it serve democracy to hide the hearings from people who come home from work to see them but don’t have cable, satellite, and internet access?”

In a statement, PBS replied that “we live in a vastly different media universe than we did 45-plus years ago. In today’s on-demand world, we will ensure that Americans have access to the replay of the hearings when and how they want to view them.”

Moyers and Winship also sent a letter Monday to station managers to press their argument further. “Let’s not be timid and behave minimally at a time of maximum threats to our political order,” they wrote. “This is not a dress rehearsal our democracy faces. It’s the real thing.”

Some station leaders say they agree with PBS. “The media landscape today is much different than it was in the early 1970s during the Nixon impeachment,” Larry Unger, CEO of Maryland Public Television, told Current. “In addition to broadcast TV, people now have streaming options, DVR and on-demand options for later viewing, and social media channels to follow important news of the day.”

MPT, which doesn’t carry the World Channel, will broadcast the hearings live and during prime time this week on MPT-HD, a secondary channel, and move MPT-HD’s regularly shows to another secondary channel. “As the current public impeachment hearings play out, MPT will continue to make adjustments to schedules,” Unger said.

WGBH in Boston will carry the hearings on World live and in prime time. The station owns and operates the World Channel through a partnership with PBS, WNET in New York City, the National Educational Telecommunications Association and American Public Television, which distributes it.

Stations that don’t carry World have other options for prime-time rebroadcasts, said CEO Jon Abbott. “I think the vast majority of them will pick up coverage in one way or another,” he said.

PBS KVIE in Sacramento, Calif., will use World for both live coverage and a prime-time rebroadcast. “We don’t plan to preempt children’s programming on our HD service so we can provide our youngest viewers with continuity of programming for their educational and social development,” said GM David Lowe.

But Miguel Monteverde, senior VP and GM of WETA in Washington, D.C., agrees with Moyers that PBS should offer the rebroadcasts in prime time on its main feed. WETA is airing the hearings on its primary station both live and in prime time.

“We view this as a mission-driven moment for our station and public media generally,” he said. “It is especially important right now, in the face of massive disruption to the TV business, to remind citizens of the important role that we play in the media ecosystem.”

[UPDATE: Vermont PBS is also re-airing the hearings during prime time on its main channel this week.]

Steve Bass, CEO of Oregon Public Broadcasting in Portland, said he sees both sides of the argument. “For people who rely on broadcast, I would say that multicast channels are very visible,” he said. But he said Moyers has a point in the sense that public TV would make a statement by airing the hearings “where people should pay attention and billboarding that ‘This is important.’”

“Part of the challenge of this is you don’t know how long it is going to last — weeks or months,” Bass said.

One thought on “Moyers’ push for prime-time impeachment broadcasts fails to convince PBS, some stations”