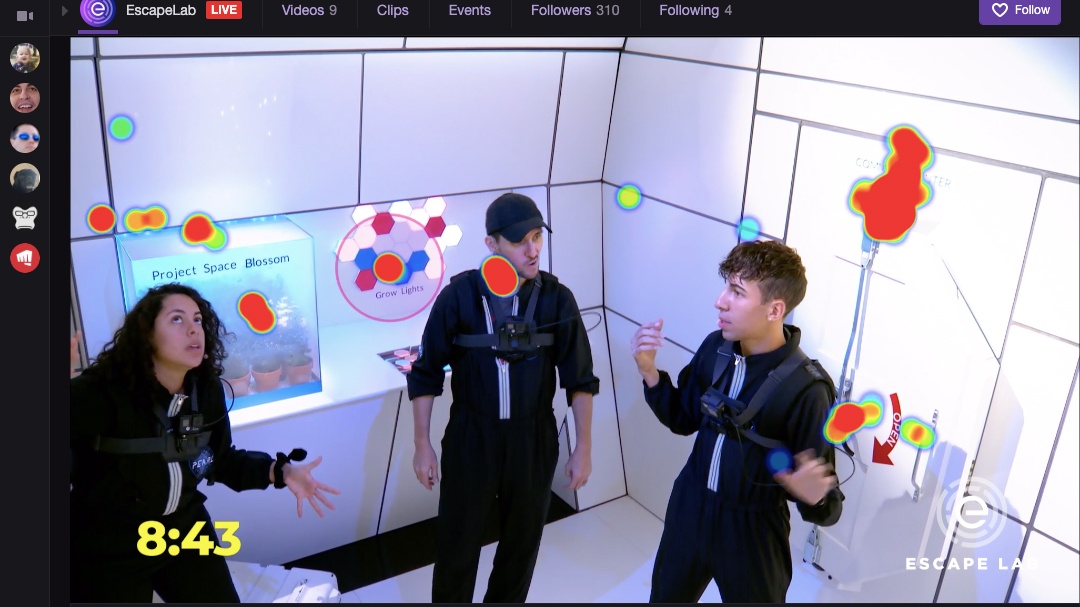 In the capstone event of an experimental livestreaming series Escape Lab, social media celebrities teamed up with an audience of Twitch viewers Sept. 9 to find their way out of a malfunctioning space station.

A team at WGBH in Boston collaborated to create an authentic virtual escape room experience for science-minded gamers and escape room enthusiasts on Twitch, a social video and gaming platform with more than 16 million daily users. In two consecutive runs, different teams of astronauts relied on the Twitch audience to help them solve puzzles and complete tasks that would get them out of the escape room and back to Earth safely. The team with the best time won.

The astronaut teams were played by The Skorys, hosts of family-friendly YouTube channels, and Twitch streamers EJ_SA and DasValdez. Audience members acted as “mission control” for each team. Justin Shaifer, host of a science education channel on YouTube, acted as the link between the audience and the players, relaying information and giving hints in real-time.

Tory Starr, WGBH social media director and head of the station’s Emerging Platforms initiative, participated as “ChatCom.” Her role involved creating audience polls and introducing interactive content to help viewers guide the astronauts out of the room — all while responding to viewer messages in the Twitch chat. Interactivity was key to putting the audience into the story, she said.

The Emerging Platforms team had to prepare to make quick “pivots” to respond to audience feedback in real time, Starr said. Whenever Starr introduced a poll inviting viewers to vote on the advice that mission control should give to the players, the team had to adjust the narrative based on that feedback.

A poll that asked viewers to name a specific constellation stumped the audience. Starr had to quickly initiate a conversation in the chat to help viewers arrive at the correct answer. Meanwhile, the clock was ticking down on the astronauts trying to escape the space station.

Later, the Emerging Platforms team responded to audience demand by extending the event, Starr said. A surge of viewers joined the livestream with only 15 minutes of planned content left, so the team went off-script to answer audience questions after the game ended. They provided a walk-through of the escape room and interacted directly with viewers to get their feedback.

Escape Lab attracted more than 33,000 unique viewers throughout the livestream, according to Sam Brewer, WGBH spokesperson. The average viewership jumped from about 500 to exceed 2,000 within the last 15 minutes of the final escape room run.

“Team Beyond,” played by Gabriella and Cole Skory and Das Valdez, escaped with the fastest time, beating out “Team Above,” comprising Eden and Tylor Skory working along with EJ_SA. Viewers pointed out that the mission control for Team Beyond had a significant advantage because Escape Lab had used the same puzzles for Team Above. Starr intends to switch up the room for each competitor in future episodes.

“We know media consumption habits are changing, we know that the world is changing underneath our feet,” Starr said.

A crucial aspect of original series created for Emerging Platforms is the intention to take an “audience first” approach, Starr said. This means creating unique content on new digital platforms while working to ensure that the series are authentic and compatible with other experiences on those sites.

On Twitch, this meant engaging with viewers in the chat and responding immediately to their questions and comments.

“One of the most interesting aspects of the whole stream was being able to see the audience respond to everything in real-time to let us know what they liked and what they might do differently,” said Rob Tokanel, a producer for Emerging Platforms, in an email.

WGBH launched the Emerging Platforms initiative earlier this year. The first experiment was “Relive It,” a series of Instagram posts and stories highlighting important historical events.  It ran in July and featured two stories looking at the events during the summer of 1969 — Woodstock and the Apollo 11 moon landing. The team aims to introduce its third experimental series on a different media platform by December.

The Emerging Platforms team is focused on creating digital media that speaks the language of its chosen platform, Starr said.

“From the very beginning of this process it was clear to everyone — and we articulated to everyone — that this wasn’t TV,” she said. “This was very much a digital-first production, and the way that things were produced for Twitch is very different.”

Interactive media “blurs the line between the creator and the viewer and puts them on equal footing,” Tokanel said.

“From our end, we know that we’re giving them an experience tailored to their tastes, and on their end, they get to become part of that process,” he said.

“We really wanted to be authentic to what we were seeing on Twitch,” Starr said. An important part of this was “making sure not only that you’re acknowledging the viewer, but that you are making sure that viewers feel like they’re part of the narrative,” she said.