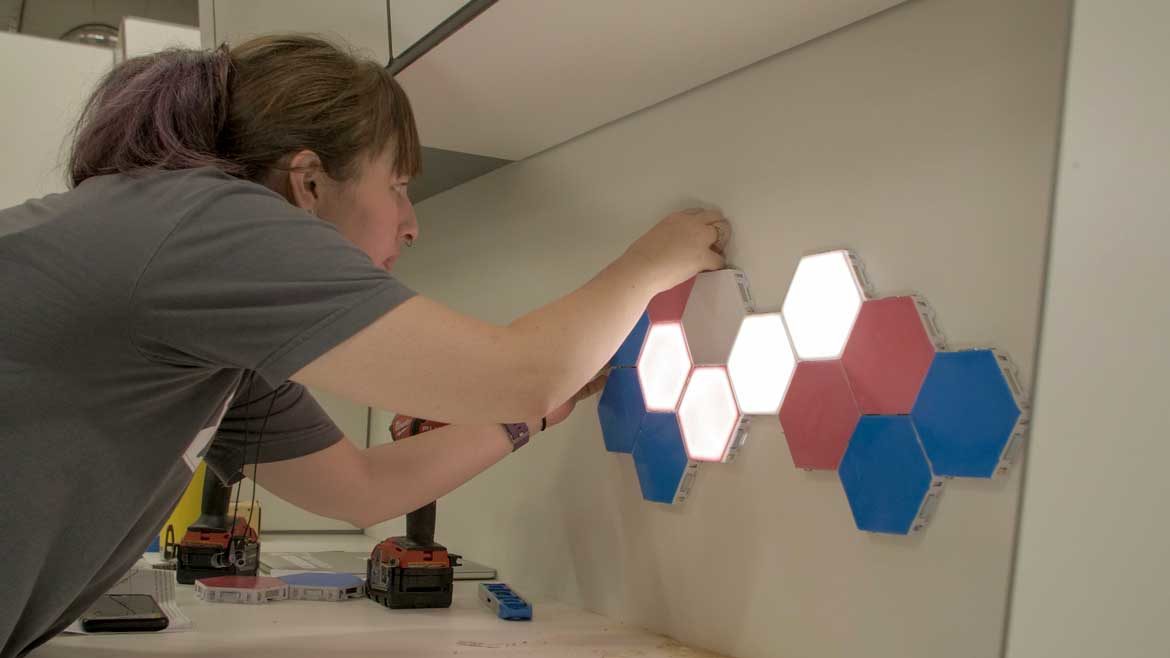 Trapology's Tina Wood builds one of the puzzles that will be featured in the Escape Lab livestream.

WGBH in Boston will host an interactive livestreaming event on Twitch Monday in which audience members will help two teams find their way out of an escape room set in outer space.

The Twitch audience will act as “mission control” for four “astronauts” played by members of the Skory family, hosts of popular YouTube Channel The Skorys. The event is a pilot for Escape Lab, a social video series from WGBH’s Emerging Platforms initiative that’s experimenting with ways to engage younger audiences on digital media platforms.

“We’re not just asking for feedback, or asking for response. … The audience actually has a hand in the storyline and in the narrative,” said Tory Starr, WGBH social media director and head of the Emerging Platforms team.

Twitch is a livestreaming social video and gaming platform owned by Amazon with over 15 million daily users. Although streamed video games with interactive chat features are the most popular content, Twitch also has channels dedicated to music festivals, art and other creative activities.

For Escape Lab, audience members will also interact by voting in polls, solving puzzles, and helping (or hindering) the astronaut players throughout their missions to escape the fictional space station. These features are all  “extensions” to Twitch’s chat room where players can review audience responses in real-time.

The Twitch audience can also expect to participate in more experimental interactions, such as creating a heat map of areas in the escape room that will help guide the players through puzzles.

The team began by parsing subreddits and Facebook groups that host discussions about escape rooms, gathering feedback about what escape room enthusiasts would like to see. They learned that many people in these communities wanted to participate in a live virtual escape room experience. They were also eager to learn more about how the rooms are produced and the thought processes of creating challenges for participants.

On August 12, WGBH released the first of several Twitch videos about creating escape rooms and puzzles. The videos gave users an early look at the Escape Lab room and featured interviews with NASA scientists and escape room designers. As of Friday, Escape Lab’s Twitch channel had over 40 followers and nearly 100 views on preview videos.

“[We are] thinking about the next generation of public media members, fans [and] audiences, and really starting to produce for the platforms where these audiences are … using the storytelling that’s native and natural to them,” Starr said.

Over three years of the initiative, Starr’s team will produce original content, learn what resonates with viewers and share those findings with other content teams at WGBH. The experiments will focus on content that’s based on one of five topic areas: journalism, education, science, history and arts and culture.

The Escape Lab is the second of three original series planned for this year.  The first pilot was “ReLive It,” which used Instagram stories to retell important historical events.

Each production will be “grounded in facts,” Starr said, and ensure that participants will learn something from it.

The live escape room experience, for example, is based on real science, Starr said.  It combines straightforward, informational content with educational elements, such as the logic puzzles and team-based problem-solving that will play out during the livestream.

“Different people are good at different things,” said Starr. “It’s a really great mashup of learning to stretch your mind in different ways.”