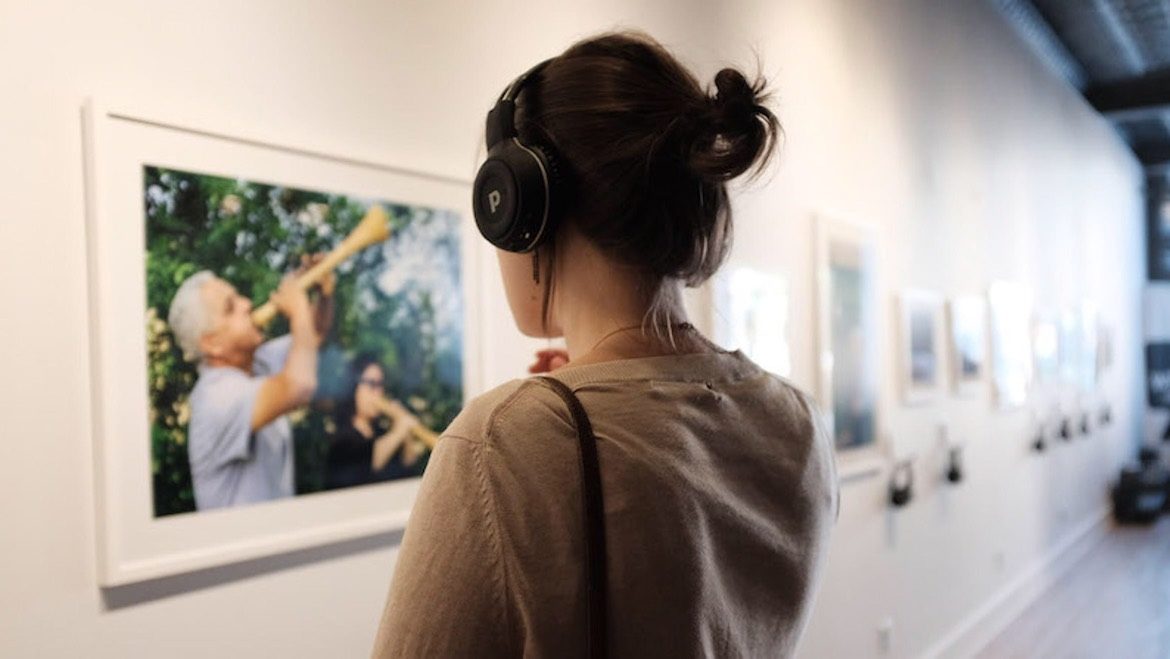 A spectator looks and listens at the opening of "Framed by WDET: Beyond Balkanization" in Hamtramck, Mich.

NEW ORLEANS — WDET in Detroit won the 2019 Local That Works contest for a project that tells stories of the region’s communities through audio and photography.

Since 2014, “Framed by WDET” has featured 10 communities, presenting images and audio stories in art exhibitions and community spaces.

Public radio leaders gathered for the Public Radio Super-Regional conference heard presentations Wednesday from the four Local That Works contest finalists and chose WDET as the winner. The station won a $5,000 cash prize.

“In public media, we commonly cite our responsibility to ensure a healthy democracy. And as local media organizations, it’s also our job to ensure healthy communities,” said Courtney Hurtt, WDET’s associate director of product development and business operations, during her presentation. “And one way to do that is to reflect the lives of the people we’re here to serve. Framed by WDET did this.”

Framed by WDET began when Detroit photographer Kenny Karpov suggested that the station work with him on stories about dress shops in Hamtramck, Mich., a community near Detroit with a majority of Muslim residents. Karpov took photos while audio producers recorded stories from the residents.

WDET’s GM came up with the idea of presenting the photos and stories in an art gallery in the community, Hurtt said. Creating an exhibition space “allowed us to bring different types of people together, literally, in one space” she said.

As WDET told stories of other Detroit communities, it paired photographers with audio producers who were independent or on WDET’s staff. In choosing producers, the station aimed to “find people who reflected the communities that the stories were going to be about,” Hurtt said. “We provided editorial direction, but it was kind of their job to leverage their relationships to shape the narrative.”

WDET aired the stories and posted them online, but “the magic happened” at the art installations where the station held events “in spaces that were familiar to the community it was about,” Hurtt said. The events included live broadcasts and community conversation. Works were then installed in locations outside of the communities they focused on, Hurtt said.

More than 20 exhibits appeared in community spaces throughout the Detroit area, Hurtt said. Nearly half of attendees said it was their first WDET event.

WDET funded the project primarily through grants. The project allowed the station “to interact with new organizations, people who support the arts,” Hurtt said. The station also raised more than $19,000 through Kickstarter to produce a Framed by WDET book.

The other Local That Works finalists were KMUW in Wichita, Kan., for Engage ICT, a series of panel discussions about important topics in the community; Pennsylvania Public Media for “Battling Opioids,” a statewide collaboration among public TV stations to help families understand and take steps to combat opioid addiction; and Voice of San Diego for a magazine-style bilingual guide to help parents understand public school options.

Watch the presentations from the four Local That Works finalists: