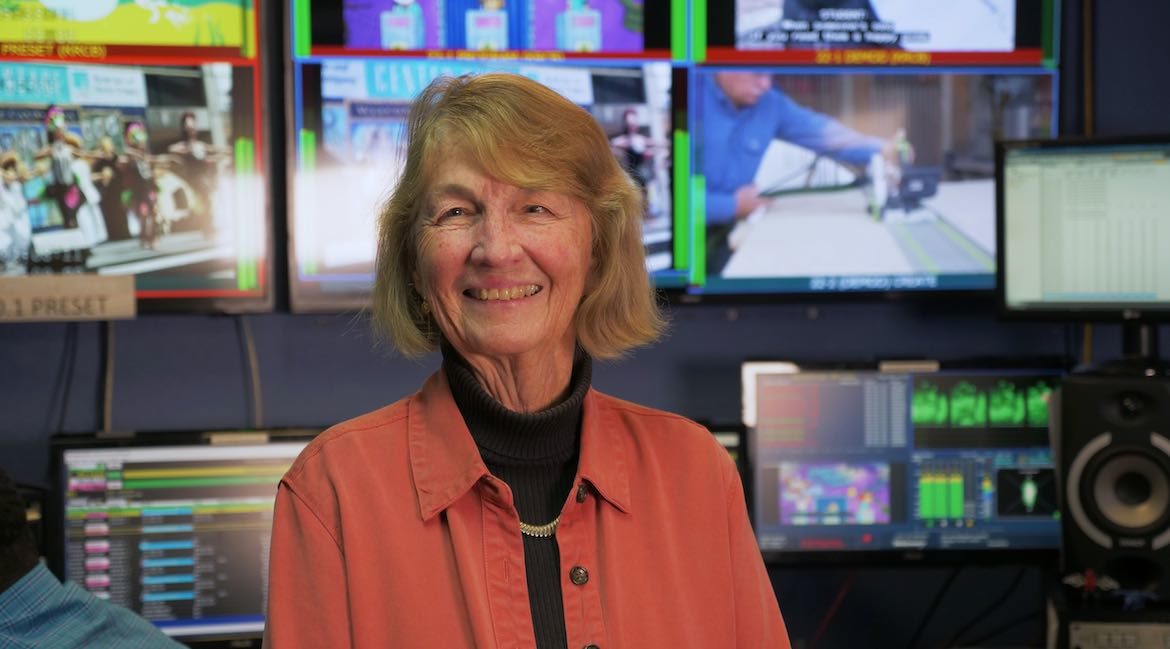 Nancy Dobbs has been a monogamous CEO for nearly four decades. In 1981, along with her late husband John Kramer and a group of volunteers, she helped birth and build the Rural California Broadcasting Corporation, a new public media service for Sonoma County. She guided the community licensee through the 1984 launch of its PBS station KRCB and the addition of an NPR station a decade later.

In this Exit Interview, Nancy Dobbs reflects on a career leading a small but mighty community-focused station in the shade of giant redwoods and the shadow of a giant joint licensee — KQED in San Francisco.

The group of people who decided to apply for the frequency back in 1980 got a small planning grant from the National Telecommunications and Information Administration, and needed somebody to do the initial work of community ascertainment.  It involved a lot of convenings to talk with people about whether they would support a public television station and how they saw it serving the community.

They asked me to take the job. I said, “I don’t know anything about public media. I know nothing about media period.” And they said, “Well, your background is what we need at this moment.”

I had worked for the California state legislature; I’d done fundraising; I’d done community organizing; I’d done public speaking, and all of those experiences and skills were essential to what needed to be done. This was January of 1981. We all agreed I would do this for six months and then we’d hire somebody who knew media. Anyway, I never left.

I was one of the earliest women general managers in the system.

People ask, “How did you crack the glass ceiling?” and I say, “Well, I built my own. … You just do it, and there you are — you’re head of a broadcast station.”

What do you consider your single most important accomplishment at Northern California Public Media?

The most important, longest-lasting thing is the fairly recent acquisition of the former KCSM television. Fundamentally, what we did was preserve a public media outlet. KCSM almost certainly would have sold to a religious broadcaster if we hadn’t come along. There’s­­ nothing wrong with religious broadcasters, but they’re serving a very narrow group, not the broad public.

Public media’s spectrum is an incredibly important public asset. It is our public commons; it’s where we gather; it’s our potbelly stove. Once it’s gone, it’s gone. [We couldn’t] let another chunk of public media broadcasting spectrum be lost.

We see it as an accomplishment for us, for the whole Bay Area community, and also for the public media system.  So, in the long run, when we look back we’ll say that’s the most important thing that we did.

What was funniest thing that happened during your years in public media?

I can only remember something that happened fairly recently.

In the FCC spectrum auction, we changed from a UHF channel to a VHF channel. In exchange, the FCC gave us $72 million dollars, which is just phenomenal. With that money, we were able to buy the KCSM frequency.

But afterwards a funny thing happened, and continues to happen, and I still laugh about it. I get a call every month ­– and I’ve probably gotten about six so far – from someone wanting to sell us a corporate jet.  If you saw our building, or my office, the idea of somebody thinking that we would want to spend the public’s money on a corporate jet knocks my socks off! You’ve got to be joking!

You’ve had a long career in public media. What advice do you have for people entering our field today?

To put it in a simple phrase, “Keep your eye on the prize.”

It is too easy in in broadcasting to get distracted by technology. I’m not saying that it’s not very important to stay on top of what’s going on, but sometimes people forget that the reason we’re in this business is to provide quality, valuable, trustworthy content. That’s the prize.

Over 40 years, the technology has changed so much, and it’s changing so rapidly now. It’s easy to think, “Oh my gosh, this year we just have to buy that thing and everything will be OK.”

All of our history, I have said, “Let’s just slow down, step back and look at what really we need to do. And that is make sure that we’re providing the best quality programming that we can.”

There was a very funny case here in Sonoma County, quite a number of years ago, where a local citizen took a commercial radio station to court because he said, “I’m receiving your signal over the fillings in my teeth. It’s got to stop!”

I don’t care how people are getting our signal. I want to make sure that the content is of value to them individually and to our community. And that’s what I want people who are entering public media right now to tattoo on their forehead.

What do you wish that you knew or understood before becoming a media executive?

When I first started, I worried a lot that I didn’t know anything about broadcasting. But, in fact, the skill set that I came in with was as important as understanding what a combiner for the transmitter is — knowing how to speak to the community and get people excited and engaged in the idea of starting and then supporting a public broadcasting station.

Our goal is to encourage engagement and that’s been our mission statement the whole time.  … So, I wish I hadn’t worried so much at the beginning about what I didn’t know.

What is the hardest thing that you tried to do and failed, and what did you learn because of that failure?

One of the things that I’ve tried and failed to do — not just myself but also leaders of other small stations and stations in overlap markets — is to convince the stations in the public TV system not to be fearful of each other. Don’t worry that your neighboring station is going to take away members that should be yours; it’s not a zero-sum game.

Two public broadcasting stations attract a larger audience. It’s not like there’s one audience, and when a small station comes along, it takes that audience away from the other station.

[Program Differentiation Plan] stations and smaller stations in general are not a threat. In fact, it’s an embarrassment of riches to have two public broadcasting stations in a community – especially in a major market. Commercial broadcasters do that. Why do we think there’s only room for one PBS station?

There’s so much work to be done. There’s so much content to be created and so many people to be informed and engaged to say we can only have one station.

Given the whole media landscape, there’s been a lot of focus on not just collaboration but mergers, acquisitions and sharing back-end operations or outsourcing them, as a way of trying to sustain public media.

Collaboration wherever it can be found is a laudable and important idea for efficiency. But unfortunately, I think CPB took it too far by saying, “If you don’t collaborate or merge or do something along those lines, we’re going to diminish your base grant.”

They did that a couple of decades ago now, and sometimes it just doesn’t work. Even though we have a good relationship with KQED, we’re like apples and oranges.  Before we had our spectrum money, before they had their spectrum money, their operating budget was about $80 million dollars, or something like that. Ours is $2.5 million.

The idea of us contracting with them to do a program guide — back when there were program guides — or to share a master control, there’s no efficiency there. And yet we were punished — and so was KQED — by CPB as they cut our base grant because we didn’t merge or collaborate in a way that deserved CPB’s attention. It goes back to CPB and, to a lesser degree, PBS not being as aware as they should be about the realities in the field.

Do you think that the public media system needs restructuring? If so, how would you do it if you could?

Restructuring is probably too big of a word. I do think there needs to be a change of mindset about how we collectively serve the public. It’s not 10 major market stations and everybody else; it’s all of us, together, reaching corners of the community with stories that other stations might not do. We should focus on finding ways to take advantage of the fact that there are multiple stations in the market, rather than think, “Oh, this is terrible.”

PBS and, to a degree, CPB, can lay the groundwork for … encouraging a more collaborative attitude amongst stations in markets with multiple stations. The value of the whole system increases when we take advantage of everything we have rather than wringing our hands that there’s too many stations.

Anything else on your mind as you’re preparing to step away from this role that you want to share?

I have to clean my desk off! And that’s going to be a big problem!

The potential of the public media system is enormous, and so important to the health of the country in terms of a just and equitable society.

I hope we can continue to keep that in front of us as the reason why we exist — it’s not to do capital campaigns or buy the latest widget. We exist for the health and good of our community — and, collectively, the country.