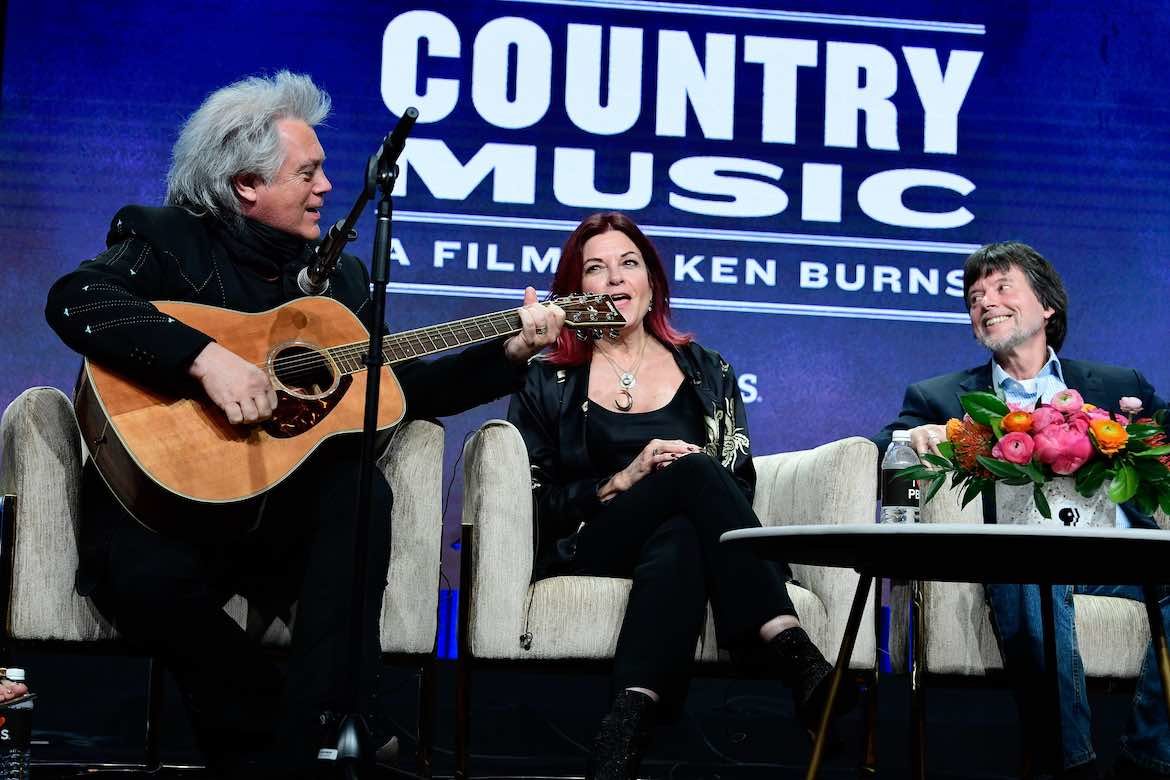 The big buzz this fall for PBS viewers is a highly anticipated series in which Ken Burns will tell the story of country music.

Burns, however, insists he’s not telling the story; the story is telling him. He and his associates just listen and set it all down.

Either way, the occasion of PBS’ most popular filmmaker focusing on another popular style of American music raises great expectations — and questions about how Florentine Films again went about tackling a monstrous topic.

The eight-part, 16-hour series, 8 1/2 years in the making, airs at 8 p.m. Eastern time Sept. 15–18 and 25–28. It will stream for free on all station-branded PBS platforms, including PBS.org and the PBS Video App. And it will be available to Passport members, for digital download and on Blu-ray and DVD in September.

Burns said that he didn’t know how Country Music would turn out when he started making it. “We let the material tell us,” he said.

The write-on-the-fly style of production meant that writer and co-producer Dayton Duncan didn’t even start working on a script until 85 of the 101 interviews were filmed and most of the 100,000 photographs had been examined.

“Producing the film is a complicated process, and it’s not that easily understood,” said producer Julie Dunfey. “Sure, we might have a rough sense of particular characters and the arc we’re going to cover,” she said. But the project is only loosely formed when it starts and doesn’t take shape until it nears completion.

That’s different from how other documentarians work, Burns said. It’s not uncommon for a filmmaker to do research, write a script and then get the shots needed to match the words.

“We never stop researching, and we never stop writing,” Burns said. “We are shooting even before we’ve begun writing. We’re doing interviews and we’re following leads and we’re collecting photographs, not knowing specifically where they’re going to go. That permits a wonderful flexibility to remain open to new things to the very end.”

Instead, Burns prefers to tackle subjects chronologically, though the historical through line has plenty of zigs and zags. Following chronology is important, Burns said, “but every once in a while we might flash back to a childhood experience as we introduce a new character.”

For example, some figures, such as Willie Nelson, have been country icons over a period of decades. Duncan puzzled over when to introduce them and when they should recur.

“You could start when Willie Nelson was a young boy and then catch up to him later,” Duncan said. “I chose to do it when he’s arriving in Nashville, which had been established by that point in our story as the songwriting capital.

“Well, who is this stranger? Someone once said there are two stories: when the protagonist leaves home and when the stranger comes to town. So who is this person? You get the chance to tell his backstory, which stretches outside the chronology.”

Finding the entry point, he said, is like choreographing a scene. “That, to me, is the great challenge and the great joy,” he said.

Opportunity ‘to understand who we are’

Though the roots of country music go back centuries, the producers chose to concentrate on the period between 1923 and the mid-1990s. The year 1923 marks the first successful commercial recording of country, made by Fiddlin’ John Carson for Okeh Records. “Once the recordings were made and available to create an audience, the music expanded from porches to churches and went nationwide,” producer Julie Dunfey said.

“Of course, we go into the roots of the music, but we start the narrative with the country music business and the technologies that brought it to the rest of the country,” she said.

Otherwise, Duncan asked, “Where would you start? Do you start with a captive African getting on a boat with a gourd that’s got a fretless neck? The point is that there’s many roots. But 1923 is when these musical roots could be shared in a different way.”

The decision to end in the mid-1990s is a reminder that the film is the work of historians and not journalists. “We don’t want to deal with the most-near past and present,” Burns said. “We need the passage of time and the perspective the passage of time offers to make narrative judgments.”

Nonetheless, the film cannily includes young artists whose work veers into the country genre. Interviews with Rhiannon Giddens and Ketch Secor offer insight into the evolution of the country sound.

“So many of the artists, musicians and producers were historians of their work,” Dunfey said. “They knew the songs. They knew the traditions. They know so much about their history, it was a revelation to us.”

The sources of ideas for a Burns documentary are as varied as the subjects themselves. Country Music sprang from a suggestion made by a friend he visited in Texas in 2010.

“It just hit me like a ton of bricks,” he said. A child of rock ‘n’ roll, Burns had learned about country while working in a record store during his college years in Ann Arbor, Mich.

“I remember those album covers — Merle Haggard, Willie Nelson, Johnny Cash and Emmylou Harris — but I don’t make films about things I know about so that I could tell you what you should know,” he said. “The last time I checked, that’s called homework.”

Instead, he welcomed the subject as yet another way to probe America’s heritage. “Like all the other films we’d done, it’s an opportunity to understand who we are,” he said.

Enthused about the topic, Burns called Duncan to get his opinion. In less than a minute, Duncan was on board. “By the time we started doing it, which was almost immediately after that, we were asking why we hadn’t done it already,” Duncan said. “It aligns with so much of what Ken has done.”

After nearly four decades of filmmaking, it is becoming increasingly likely that any new Burns project will intersect with one of his previous works.

Often one Burns film will consider a major historical event already treated in a previous film, but from a different perspective. For example, the Great Depression, a key element in films including Jazz, Baseball, The Roosevelts, National Parks and Prohibition, now is seen through the prism of country music. Country Music asserts that country music became more popular during the Depression because it reflected the hard times most Americans were experiencing. Also, as country’s fans moved westward as part of the great internal migration, they introduced the music to new regions, increasing demand.

A mural by Thomas Hart Benton that appears in Country Music provides another example of Burnsian cross-pollination. In the series’ first episode, singer Kathy Mattea reflects on the mural, located at the Country Music Hall of Fame. Mattea worked as a tour guide at the institution when she arrived in Nashville. The mural was Benton’s last work, never signed, and appeared in the waning moments of Burns’ documentary on the artist.

Viewers have never seen or heard one element common to all of Burns’ films. Whenever editing is finished on a reel at Burns’ production house in Walpole, N.H., the staff rings a cowbell for all to hear.

“Ken writes down the exact moment,” Duncan said, “and somebody rings it as loud as they can.”

Each episode of a Burns documentary comprises four or five reels. “When we’re done with the episode, we really whoop and holler,” Duncan said. “And then the next day, we start on the next one.”

With Burns promoting Country Music, the cowbell has been ringing less often. Between interviews, he’s been focusing on other projects, including films in progress on Ernest Hemingway, Muhammad Ali and the American Revolution.  Also underway are documentaries on Benjamin Franklin, Lyndon B. Johnson’s Great Society, the history of the buffalo, and the extent of U.S. knowledge about the Holocaust while it occurred.