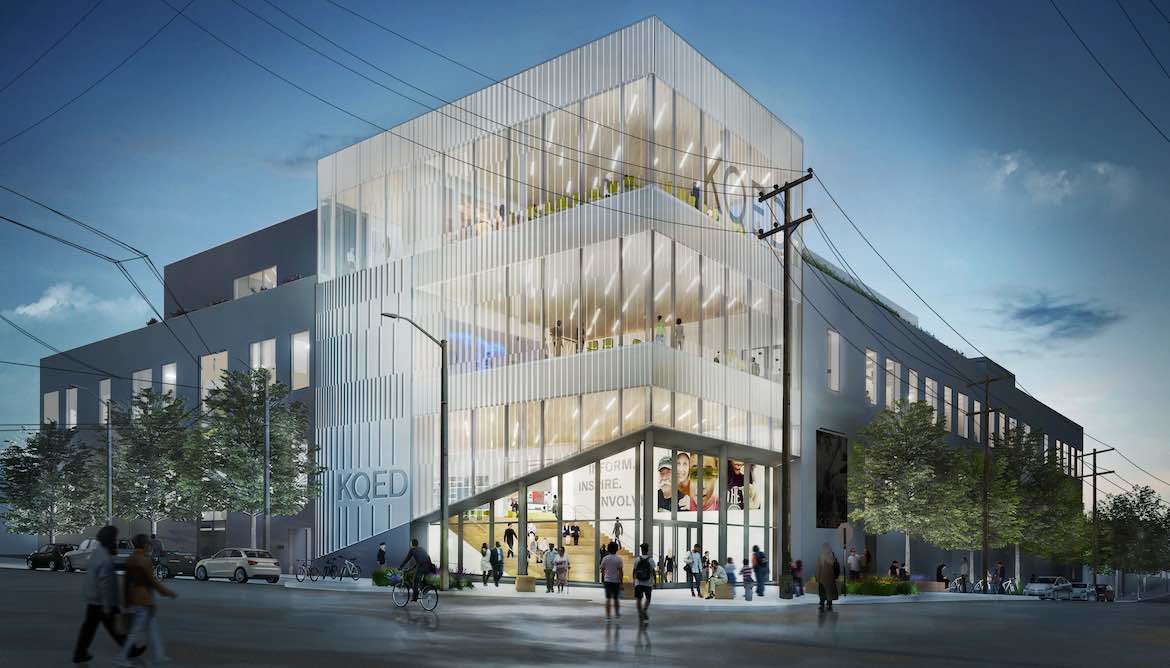 A rendering of an exterior view of KQED's renovated headquarters at Mariposa and Bryant Streets in San Francisco.

SAN FRANCISCO — Imagine a world before Facebook, podcasts and iPads, a time when design thinking was new, engagement was what you did before you got married and iPhone updates weren’t annoying because, well, we didn’t have iPhones. Yet.

In 1992, when KQED moved into a blocky grey building at 2601 Mariposa Street in San Francisco’s Mission District, it was a state-of-the-art place to begin evolving from a public broadcaster to a digital public media service.

An ambitious $56 million renovation now underway is aimed at accelerating that evolution with a space not only for cutting-edge multimedia stories but also for the audience that sees, hears and increasingly wants to talk about them.

“We’ve outgrown this building,” said Michael Isip, KQED’s president and CEO, at a Sept. 17 groundbreaking event. With nearly 500 employees, KQED is “twice the size” it was a quarter-century ago, Isip noted. Moments later, he and San Francisco Mayor London Breed whacked sledgehammers into what used to be the wall of KQED’s front lobby.

Breed called KQED “the people’s station” that taught her how “to listen to the news and to actually discuss current events” when she was a student at Galileo High School in San Francisco and growing up in public housing, just blocks from City Hall. “How do current events and issues impact our lives locally? And nationally? And how do we talk about those things?” she asked.

That mission aligns with Isip’s vision, which is for KQED to become a public square highlighting “civil as well as civic engagement,” where community conversations about “deepening divisions, deepening polarizations” can happen.

“What we are creating is a place of trust … that embraces transparency, so that we can be more open and accessible to our community,” Isip said. The goal is for people to “come in, connect with our journalists, our stories, the talent from PBS, NPR, city leaders, thought leaders and most importantly … each other.”

It’s a sound bite that makes strategic sense: According to a March 2019 report by the Pew Research Center, increasing numbers of Americans are eager to get local news online and willing to support it financially, though they also want journalists to “understand their community’s history,” and they give “far higher ratings” to news organizations that do.

Under a radical redesign by the San Francisco–based architectural firm EHDD, which also designed the Monterey Bay Aquarium, KQED’s headquarters will become a purpose-built structure that combines a public face and private workspace. The redesign is part of a $135 million fundraising drive spearheaded by John Boland, who retired as CEO in April and became KQED’s president emeritus.

A wall of KQED’s existing building at the corner of Mariposa and Bryant streets, now decorated with a cartoon mural, will become KQED’s front door, anchored by a glass wedge soaring over a two-story lobby. According to EHDD principal Rebecca Sharkey, a “lifted corner” of glass will allow passersby to look directly into the lobby, connecting building and street. In the lobby, a wide flight of stairs next to a wall will feature screens with live feeds.

On the second floor, another open lobby will allow a public glimpse of production areas. KQED’s largest TV studio will be expanded into “The Commons,” a 3,850–square-foot theater that will accommodate up to 340 people with updated audio and video capability for hosting live events. One of those will be KQED’s “On Common Ground” series, in which KQED journalists host conversations on topics such as gun laws, economic inequality, affordable housing and the future of work.

KQED’s private workspaces will also be transformed, including 14 new audio and video edit rooms and reconfigured master control spaces. “Cable trays” allowing easy access to electrical and cable systems without tearing up walls will support upgrades in years to come, Sharkey said. Despite the new program areas, the redesigned building will use 28% less energy than the old one, Sharkey added.

On the second floor, a new newsroom will combine editorial staff from all of KQED’s content areas — including news, science, education and arts and culture — and all of its platforms, including television, radio, digital and social media. KQED’s interactive and audience “intelligence” teams also will be based in the newsroom, a move that Boland said will create a “platform-agnostic” space where a story can move from assignment to analytics.

Staffers will have four times more meeting space and phone rooms. A garage-sized “Innovation Lab” will host design-thinking sessions. Flexible layouts allow for up to 40% staff growth. Sharkey also designed what she calls “the collaborative spine,” a linear space that runs the length of the second floor, with casual seating for staff to socialize when deadlines aren’t looming.

While the building’s footprint will increase by just 9,000 square feet to 165,000 square feet, a third of that will be where staffers want it — an energy-efficient “cool” rooftop, the “one absolutely overriding request” that they made during the planning process, Boland said. The roof terrace will be able to host up to 250 people. Its features include sheltered seating areas with city and bay views, a boardroom and a catering kitchen.

KQED’s new digs are likely to attract more visitors to its neighborhood, a rapidly gentrifying yet gritty South of Market location where gourmet bakeries and doggie daycare “lounges” alternate with the sober realities of people who live and sleep on the street. Glittering as it may be, KQED’s new “lifted corner” will face the city’s bus maintenance yard. With at least six areas from lobby to roof where public access will be not just permitted but encouraged, security could be key to the “civil” conversations Isip envisions.

Though KQED’s project description cites “enhanced security systems,” spokesman Peter Cavagnaro declined to provide specifics. But he said that the station will have “a secured work environment with reception and additional security and staff supported by modern and updated systems.”

Renovation is expected to take two years, with contractor Cahill Construction — which built the original building — projecting a spring 2021 opening. Meanwhile, KQED is operating out of temporary headquarters at 50 Beale Street in downtown San Francisco. The July move, which Isip called “an epic effort,” required months of planning, including creating a new transmission link to San Francisco’s Sutro Tower. Except for a few “hiccups,” including dropped captions on some television programs, the move went smoothly, Isip said.

KQED’s renovation will complete a process that began in 2010 when Boland returned to San Francisco after six years as chief content officer for PBS. He was struck by the recession’s effect on local media.

“Here as everywhere else, there was this void for high-quality, unbiased regional news,” Boland said.

Between 2013 and 2017, KQED raised $45 million for this digital transformation, introducing new programming and expanding its staff. It was the first phase of what would become Campaign 21, which had raised $96 million as of Sept. 17 towards its final goal of $135 million. That amount includes $91 million for the headquarters renovation and the move to and from Beale Street.

KQED leaders didn’t begin discussing an upgrade to its headquarters until 2017. “We didn’t want to do a renovation of the building before we knew what our teams would look like,” said board member and Campaign 21 co-chair Anne Avis. “Then it became clear that we were maxed out on space and also the space wasn’t suited to the kind of collaborative teamwork and institution that we had created.”

Between Boland’s return in 2010 and now, KQED has doubled the size of its editorial staff, adding two new news desks for politics and government and for Silicon Valley, expanding its arts coverage with dedicated radio reporters and daily video and podcasts, and rebooting its educational services, a core part of KQED’s mission from its beginnings, for the millennial generation.

Under Boland’s tenure, KQED’s operating budget increased nearly 55%, from $54.9 million in 2010 to $84.9 million today. Membership has grown by a third, to 224,328. In January, KQED’s average weekly audience across its radio stations, website and two television channels totaled 2.5 million, according to a KQED projection based on unduplicated usage data from Nielsen Scarborough.

At 90 people, KQED’s newsroom is now one of the largest in the Bay Area, and its science desk is the largest in the West. KQED Education’s budget has nearly doubled in three years to $3.1 million, and the unit now serves more than 11,000 teachers and 14,000 students. Instead of appealing only to educators, KQED’s “Learn” online platform, which launched in March 2018, engages students directly with media literacy and training.

Among the overall staff of 499 today, approximately 210 work on news and information content, according to Isip. That’s about the same number as KQED’s entire workforce in 1992.

When Boland showed those numbers to a San Francisco donor who had kicked in $1 million for  the digital push, the donor responded by contributing an additional $20 million for the renovation, becoming Campaign 21’s lead donor.

It turns out that it’s easier to raise money for the building you need after you’ve built what goes inside it.

“It was not only journalism first or staff first — it was audience first,” Boland said. “It was really, ‘What do the people need from us?’”

“We wanted to be there for the audience in their digital lives,” he said.