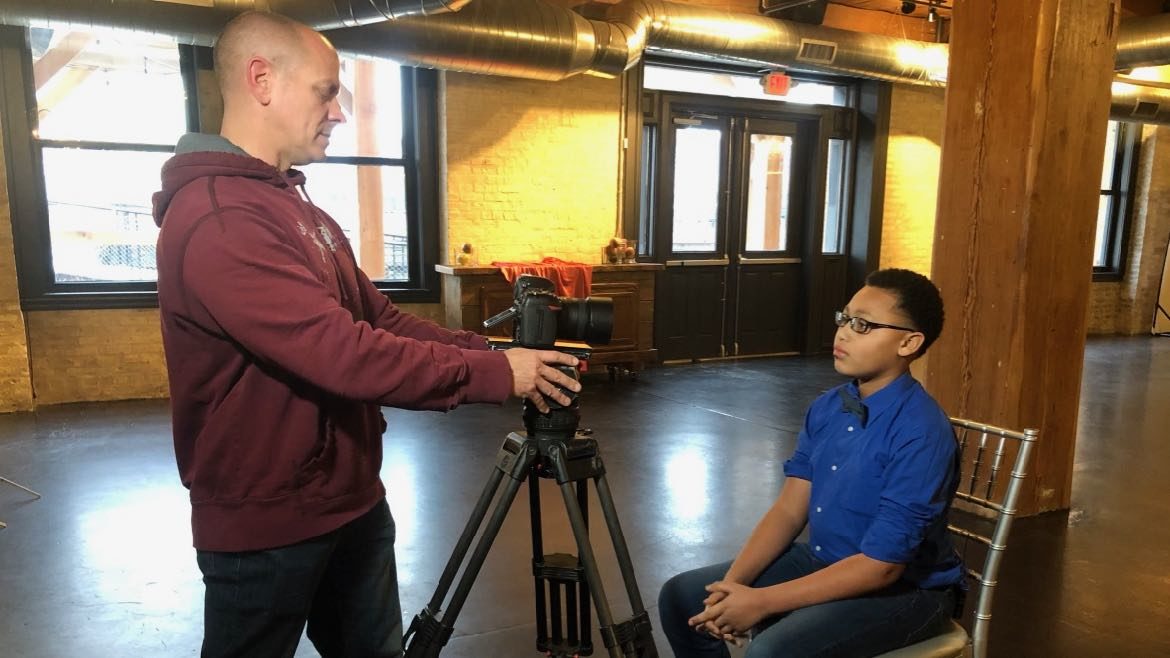 Milwaukee PBS videographer Justin Migliano sets up a camera to interview Alex, a teen who described how being bullied led to his depression in “Kids in Crisis: You're Not Alone.” (Photo: Scottie Meyers/Milwaukee PBS)

When Milwaukee PBS teamed up with the Milwaukee Journal Sentinel to help spread awareness of a statewide mental health crisis, the coverage reached far beyond the Wisconsin communities that are trying to address high rates of teen suicide.

The partnership was intended to share first-person stories of teen survivors and provide resources for responding to youth suicide in communities that aren’t covered by USA Today Network-Wisconsin.

With a multiplatform distribution strategy combining local broadcast and streaming video on websites of more than 70 Gannett newspapers, the program generated responses from across the U.S. and as far away as the Philippines. Its broadcast premiere in May was presented by 10thirtysix, Milwaukee PBS’s newsmagazine, and supported by a companion website with educational resources.

When Zachary was attending a Detroit-area high school, his best friend took his own life, he said. He still struggles to understand the reasons why. Because of the stigma over mental health, no one in his community talked about his friend’s death.

The intent of Kids in Crisis: You’re Not Alone, Zachary said, is to approach the subject of teen suicide candidly and break that stigma.

“We know that by talking about it we can help ourselves and help others,” Zachary said.

When Linnane began reporting Kids in Crisis in early 2016, Wisconsin’s youth suicide rate was roughly 30 percent higher than the national average. Her publisher at the Appleton Post-Crescent wanted the newsroom to look into the stories behind the statistics.

Linnane’s first report examined the suicide death of Jonathan Wesener, a teenager from Edgar, Wis., whose parents said he was victim to school bullying. Her reporting also explored what schools could do to address problems with bullying. As Linnane dug into more incidents of teen suicide, she uncovered barriers to mental health in the state. Soon, she began profiling teens who considered suicide but backed out and got treatment.

“When you write about people who thought about suicide but survived, there can be a positive contagion of effects where people are more likely to seek help after they read the story,” Linnane said.

From those early stories, the series grew. Over the next three years, more than a dozen reporters produced a total of 124 stories for the chain of 11 Wisconsin newspapers owned by Gannett. As coverage of Kids in Crisis expanded, USA Today Network-Wisconsin held town hall meetings, suicide prevention trainings and storytelling events to spread awareness beyond the news page. At each event, Linnane said, people who lived outside of areas where USA Today Network-Wisconsin had newsrooms would ask reporters to hold similar events in their communities.

Linnane had moved from the Appleton Post-Crescent to USA Today Network-Wisconsin’s Milwaukee office. In that job, she began talking with colleagues about how to expand the reach of Kids in Crisis. Producing a video based on the coverage was one of the options.

Some Gannett co-workers at the Milwaukee Journal Sentinel were already interested in collaborating with Milwaukee PBS but hadn’t yet found the right project.

Linnane knew Scottie Lee Meyers, a multimedia producer at Milwaukee PBS. She sent him a Facebook message asking if the station would be interested in working with her newspaper on the project.

Editors and managers at both outlets quickly hashed out the details and placed Linnane, Meyers and Milwaukee PBS Producer Maryann Lazarski in charge of the editorial direction of the project. They shot the documentary over the winter, aiming for a May airdate that would coincide with Mental Health Awareness Month.

Milwaukee PBS didn’t seek out extra funding for the partnership. Instead, the station produced the documentary with its existing budget for 10thirtysix. The station didn’t compensate Linnane for her work on the production; Gannett covered the costs of her work under her regular salary.

The documentary focuses on four teenagers — Alex, Barrett, TJ and Reyna — all of whom Linnane was acquainted with from her reporting. In the documentary, Alex and Barrett recall how being bullied in school led to their depression. One scene depicts Alex showing and reading from the suicide note he wrote to his mother.

TJ, who transitioned from female to male between eighth and ninth grade, describes the anxiety that process played on both him and his family, and how his family came to accept him. Reyna, who was born addicted to heroin, grew up in foster care and was sexually assaulted as a toddler, explains how her past experiences led her to dark places.

While the documentary’s first half focuses mostly on the traumas each teen faced, the second half presents coping strategies and depicts how they have helped teens in similar situations.

It was important for each of the teenagers to tell their stories in their own words, Lazarski said, because it will help teens who watch the film relate to their experiences. For that reason, the documentary eschews third-person narration.

“I didn’t want to have an outside voice,” Lazarski said.

The producers also clocked the documentary at 30 minutes, mainly so teachers could show the full video in the classroom and have time for group discussions afterward.

Limiting the documentary to 30 minutes was challenging. Each of the teens who participated had stories that were compelling enough for their own documentaries, Lazarski said. Producers conducted interviews in a way that allowed them to edit the teenagers’ words into a comprehensible group narration.

They chose to shoot footage with DSLR cameras instead of traditional field cameras. The result, Lazarski said, gives the documentary more of a cinematic feel that “plays into younger audiences.”

In May, Gannett streamed the documentary on more than 70 of its newspaper websites, and Milwaukee PBS paired its broadcast premiere with a half-hour live special from 10thirtysix that featured interviews with health professionals and parents of teenagers who have experienced trauma. For a companion website, the partners created a toolkit of mental health resources that was modeled after a similar series from Sacramento’s Capital Public Radio.

After the documentary’s broadcast and streaming video debut, the response was immediate. PBS NewsHour produced a segment featuring a clip from the documentary. Teachers and administrators from more than 170 public school systems across the country requested copies to show to their students. Professors from as far away as Puerto Rico and the Philippines requested copies.

Milwaukee PBS producers are continuing to spread awareness by hosting documentary screenings and town halls across the state. Earlier this month a state task force on suicide prevention convened a hearing at Ripon College that included a screening of the documentary and a panel discussion with teens who participated in the film. The Wisconsin state legislature plans to screen the documentary this fall.

Both partners credit their collaboration on the documentary as key to its reach and impact. They view the ability to partner with other media organizations as increasingly important as local newsrooms downsize.

“It makes me really hopeful to see collaborations like this happen because they help us accomplish more than I think we’d be able to alone,” Linnane said.

Linnane, who officially joined the Journal Sentinel staff in January, is “back into regular newsroom mode” and working on other assignments right now.

Producers at Milwaukee PBS, on the other hand, are working on more coverage of teen mental health. They’re following the story of a fifth teen who appeared at the end of the Kids in Crisis: You’re Not Alone. Her story will air as a regular segment on 10thirtysix in the near future. Lazarski intends to produce another full half-hour program later this year on how trauma and poverty affect teen mental health.

Still, both sides say they’re hopeful for future collaborations on the series.

“Perhaps there’s going to be times where we go forward and she’s not able to join us,” Lazarski said, referring to Linnane. “We’ll talk more to her. She’s certainly still a part of this.”

An earlier version of this story provided the incorrect title for Milwaukee PBS’ documentary. It is Kids in Crisis: You’re Not Alone.

Leave a Reply to Harold A Maio Cancel reply