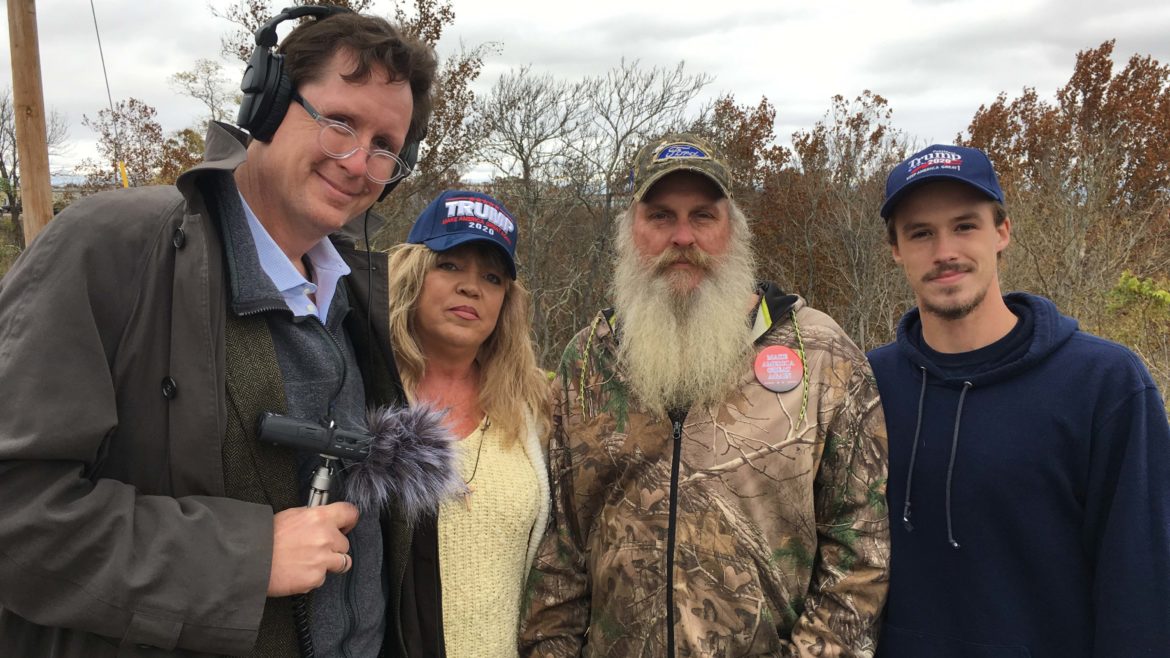 Trey Kay of "Us & Them," left, interviewed Trump supporters who turned out for a political rally in Huntington, W. Va.

On the morning after the 2016 presidential election, as the nation was reeling in shock from Donald Trump’s surprise victory, I realized that my training in public radio had prepared me for that moment.

I had already left my news reporter job at KUER in Salt Lake City in a quest to tell different kinds of stories. Reactions to President Trump’s election helped people see that the United States was not the country they thought it was. I knew that it was time for me to step up and help people listen to each other in new ways.

I recognized that many people would not want to hear what I had to say. For those who were angry or gleeful over Trump’s election, it was not time to listen, but to declare war. I watched as news media outlets doubled down on division by feeding into people’s tribal rivalries and confirming their world views. A complicated and diverse nation was being reduced to two warring sides.

But here in progressive Salt Lake City, inside the red state of Utah, I saw so much more nuance in the ways people reacted to the new political order. I saw religious conservatives sympathetic to the plights of persecuted Muslims struggle with the Trump administration’s hard line on political refugees. Immigrants who had felt safe in my community were suddenly afraid. Daughters unfriended their fathers as political arguments intensified on social media. I talked to many people who were worried about the viability of our democracy if we couldn’t figure out how to talk to each other across the political divides.

Two years later, I worked with KUER again on a podcast called Next Door Strangers. In a six-episode series, we explored how to help people connect in a time of division. We took the stance that public media’s role is to help communities grapple with what divides them. We aimed for engagement and self-reflection; each episode included a personal challenge to each listener to try in their own life. We partnered with the non-profit Living Room Conversations to provide people with opportunities to talk with strangers.

Taking this proactive stance required us to rethink our approach. We had to get out of our comfort zones and ask listeners to do the same. I started to ask myself questions about my role as a journalist. What should the role of public media be in facing our country’s divisions? As audiences sort themselves along ideological lines, do we continue the journalistic tradition of telling stories as fairly and truthfully as we can, or are we called to do more?  Can public media play a role in actively healing the country’s divisions, and should it? Is it our place to encourage listening and understanding at a time when Americans are showing less and less appetite for empathy?

To answer these questions, I talked with innovative producers who are working on projects that attempt to bridge political and cultural divides. This work is going on across public broadcasting — at local stations, by independent producers and at national organizations such as NPR and StoryCorps. Few journalists view themselves as “healers,” but everyone I talked with agreed that public media does have a unique role to play in this moment.

‘We don’t agree on facts’

Trey Kay, host of West Virginia Public Broadcasting’s Us & Them podcast, started doing this work a decade ago with The Great Textbook War. While producing that audio documentary, he found his beat of uncovering cultural differences between people, conveying their stories with respect and understanding. He’s always been upfront about his progressive views, and he’s been surprised to find that most people — from religious fundamentalists to farmers in Arkansas — want to talk to him. “I definitely think public media has a role,” he says.

Kay has found that most people want to be engaged in respectful dialogue, but he says it’s getting harder to start those conversations. In his experience, it’s become increasingly difficult to find any common ground. “It seems as though we don’t agree on facts,” Kay says. “We don’t agree on process.”

“There are attacks on our government organizations,” he says. “People of various races, ethnicities and religious practices are being openly maligned, and for some people that seems like a reasonable thing to discuss,” Kay says. “The center of gravity has shifted. I personally feel very disoriented. There are times where it’s hard to stay calm.”

In spite of the challenges. Kay remains committed to the work. “It’s not just about politics — it’s about discourse,” he says. “Public broadcasting can be a part of trying to engage in discourse in a way where it actually feels like you are beckoning people out of their echo chambers into the conversation.”

But is it a journalist’s role to help people come together? NPR Senior Editor Neva Grant is not sure that it is.

“I think we have to be realistic about public radio or any media could accomplish because the divisions are so deep,” Grant says.

Grant oversaw production of Civility Wars, a recently concluded NPR News series that combined 10 radio stories and digital coverage. “The point wasn’t to make a judgment or takeaway lesson,” she says. “It was just to make a series of impressions from different parts of the country to show how people are navigating this idea of civility. We didn’t even start with the premise that civility was a good thing — because for some people, it has a pejorative taint. It smacks of tone-policing. It can be particularly annoying to people of color or marginalized groups; it can sound like they’re being told to shut up. That was part of the reporting we did.”

In social media responses to the coverage, Grant observed outpourings of strong emotions. “People are angry. Some of them don’t want to be healed,” she says. “There are a lot of people who are not interested in this service. They feel ‘I’m mad and I deserve to be mad. I don’t want to come together.’ We have to respect that as well.”

Grant does believe that public media has a unique role to play through its ongoing news coverage. “What we can do best is lay out the issues to start a conversation,” she says. “It is not our job to heal, it’s our job to create and promote conversation … that can encourage other people to investigate ways of healing.”

‘Bring us face to face’

In Seattle, KUOW Public Radio has been hosting community events along these lines. The “Ask A…” project creates an opportunity for dialogue between people who rarely talk one-on-one. In events built on a speed-dating format, ‘askers’ interview individuals from a group that’s been portrayed negatively in the media, posing neutral questions about their personal experiences and beliefs. Their first event, “Ask A Muslim,” responded to Trump’s campaign pledge to limit immigration from Muslim countries. Since that first experiment in early 2016, KUOW has held events featuring gun owners, police officers, transgender people and Trump supporters, a political minority in liberal Seattle.

Ross Reynolds, KUOW’s EP of community engagement, says the events are designed to increase empathy and understanding between participants, and survey research has confirmed that they’re effective when done with a small group. With help from researchers from the University of Washington, KUOW’s engagement team conduct online surveys with participants before and after each event, and then ask them to do complete a final survey threemonths later. Results have shown that positive attitudes, empathy and knowledge of the featured group all went up and stayed up after the event.

The challenge is how to scale the model for “Ask A …” so events can be offered to more people, especially when the format is so dependent on personal interaction. Reynolds sees this work as central to KUOW’s mission to broaden conversation and deepen understanding. “Nothing happens unless you can begin with some understanding,” Reynolds says. “This work is essential for any kind of democracy.”

StoryCorps founder Dave Isay is concerned that the country’s deepening divides pose an existential threat to democracy, but he says public media is well-positioned to respond.

“This is exactly what public media was built for,” Isay says. “Libraries and public broadcasting — these are the civic centers of society.”

To that end, StoryCorps is working on One Small Step, a project that is a twist on StoryCorps’ practice of recording conversations between people who know and love each other. This project pairs people who have never met and have different political views. “We’re putting strangers together, not to have civil conversations or to find common ground, but just to remember that you don’t want that other person dead,” Isay says.

StoryCorps has been developing One Small Step over the past 18 months by recording in a few select cities. Isay says early evaluations show that the process of asking personal and respectful questions during their conversations helps participants feel closer. “They feel more hopeful and less fearful,” Isay says.

He believes something about the process of being recorded changes the interaction. “When you come to a StoryCorps booth, and you realize that you’re speaking to your great, great grandchildren, you bring your best self … as opposed to Twitter where it’s easy to bring your worst self.”

Isay plans to expand the project significantly in 2020 and roll it out over at least three years. A single recorded conversation is a very small step, he says, but it’s part of a bigger vision. The StoryCorps team is exploring what a longer intervention could look like — such as extending the interview into continued interaction within a community. “This is the hardest and most important thing that we we’ve done, and we’re going to take a shot at it. Who knows if we’re going to be able to pull this off?” Isay compares the effort to changing people’s minds about smoking. “Today, acting like a total asshole to people you disagree with is sexy and cool. Hopefully someday, it won’t be.”

Isay recognizes that the siloed media environment makes this project an uphill battle, but to him that means public media just needs to work harder. “It’s playing the long game in a short-game culture, keeping your eye on where you’re headed, and not worrying about where the tide is going.” Sometimes in order to reach people, Isay says, you have to show up in unexpected places doing unexpected things; that’s why he makes regular appearances on Glenn Beck’s radio show.

One thought on “How can public media heal a divided nation?”