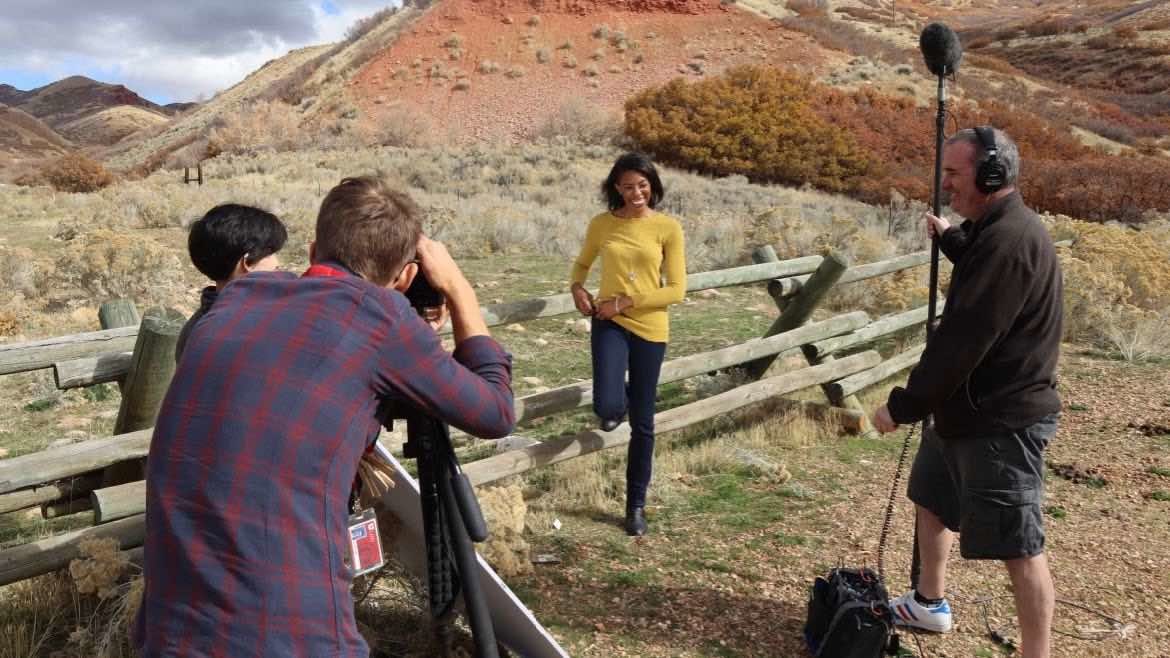 Producers involved in creating This Is Utah insist it is as unique as the state where it is produced. They’ve filled the magazine with collages of faces and places that are uniquely Utah. The show mines a deep vein of production talent that, in the past, has been on display only sporadically.

KUED has been widely and justly praised for the quality of its documentaries, said Scott Pierce of the Salt Lake Tribune, a local media columnist for nearly three decades. This new eight-episode series, which premiered Thursday, is applying those same high standards on a weekly basis.

In the premiere episode, location manager Mimi Davis Taylor explains how she scouts sites for film and TV production. In the process she leads a mini-tour of the state. Other segments feature Provo’s International Folk Dance Ensemble and profile Joe McQueen, a jazz legend in Ogden, who will celebrate his 100th birthday May 30.

A directive from KUED GM James Morgese to Lisa Olken, director of content, spurred creation of This Is Utah. “It wasn’t very specific,” Olken said. “It was that we need a series.”

For all the acclaim drawn for KUED’s documentaries, new productions debuted only a few times a year. A weekly series would give viewers more reasons to connect with the station.

Series EP Nancy Green said that in her 25 years at the station, “the culture has been to do longer form in-depth storytelling.

“That’s how the producers grew up. That’s the system we had and I think that it served us really well,” Green said.  “But we realized that in today’s media environment we really needed a shift. We needed more of a presence, a slightly different model. I think it was just the time.”

This Is Utah is not KUED’s first ongoing series. Three years ago, Olken launched The Hinckley Report, a studio co-production with the Hinckley Institute of Politics at the University of Utah, offering a roundtable discussion of Utah politics.

“This is just a whole different puzzle to solve,” Green said. “It was a real challenge to have so many different people producing different parts of the whole. Handling design elements and designing credits weren’t new, but doing it on a larger scale was a new experience.”

KUED became the only PBS station in the market as of last June, when KBYU in Salt Lake City ended its PBS membership. KUED leaders insist this development had no impact on the decision to produce This Is Utah. “We were discussing this series at least a year before we knew about the KBYU situation,” Green said.

Some of those discussions involved finding a host, fundraising and defining strategies to expand the series’ reach through social media and other digital platforms.

KUED conducted a national search for a host, ending with the selection of Liz Adeola, who was working at WRTV, the ABC affiliate in Indianapolis, as a multimedia journalist and fill-in anchor before moving to KUED.

Adeola said the series’ concept had been described to her as a Utah version of CBS Sunday Morning. “Working in news for more than a decade, I would hear people say those kind of jobs don’t exist anymore, that it’s all about crime and things like that,” she said. “So to find this perfect fit for me in Utah is incredible.”

At times, Adeola steps in at her own peril. “In one episode, Liz is with the yo-yo grandmaster of Utah and nearly gets her ear cut off,” Green added.

As the show developed, Johanna Hamilton, KUED director of marketing and community relations, worked on distinctive design elements. “We determined that it was very important for us to develop a brand around this show, an iconic logo and iconic imagery, so there would be recognition in promotions on our air and in all of our advertisements,” she said.

This Is Utah airs at 7 p.m. Thursdays, the traditional PBS time slot for local programming, but viewers can catch it elsewhere. Each new episode is available for streaming on the KUED website at the same time as it’s broadcast. Repeats are scheduled on Saturdays and Sundays.

In addition, subscribers to KUED Passport, the local version of PBS Passport, can stream three or four episodes before broadcast.

Because each show consists of three segments, the station also posts videos of individual stories on Facebook, Hamilton said. “The segments living on their own are much more shareable on social media platforms,” she said. “They can appeal to a particular business or audience or the community we’re in.”

New stories are posted weekly, prior to broadcast. To engage followers, the Facebook page also shares a weekly trivia contest offering prizes to winners. The show has a presence on Instagram as well.

“We’re really trying to meet our audiences where they are, and individual segments of the show have the potential to appeal to a broader audience,” Hamilton said.

Stories told in any segment must meet the “hook” test, Olken said. “What is the Utah hook? What is it about the state that informs that person or that event?” she asked. “We don’t want to capture an event that could be in Colorado, Washington or even New Jersey. We want to select stories that really inform about the people and places of this state and region.”

The show tackles public affairs issues indirectly, if at all, and filters history through personal recollection.

“For example, we might do a story about someone well-known in our community who is fighting for the homeless, but it won’t be about the issue of homelessness,” Green said. “Our story about jazz musician Joe McQueen looks at Ogden history through his eyes. So the history comes out naturally within that story.”

To finance This Is Utah, KUED needed to raise funds only for the incremental expenses of shooting on location, such as meals and occasional overnight lodging. Salaries for those who worked on the series and routine production expenses are part of the overall station budget.

Two foundations, The George S. and Delores Dore Eccles Foundation and The Lawrence T. and Janet T. Dee Foundation, made commitments of between $5,000 and $10,000 each. A third funder is expected, though the deal has not been finalized.