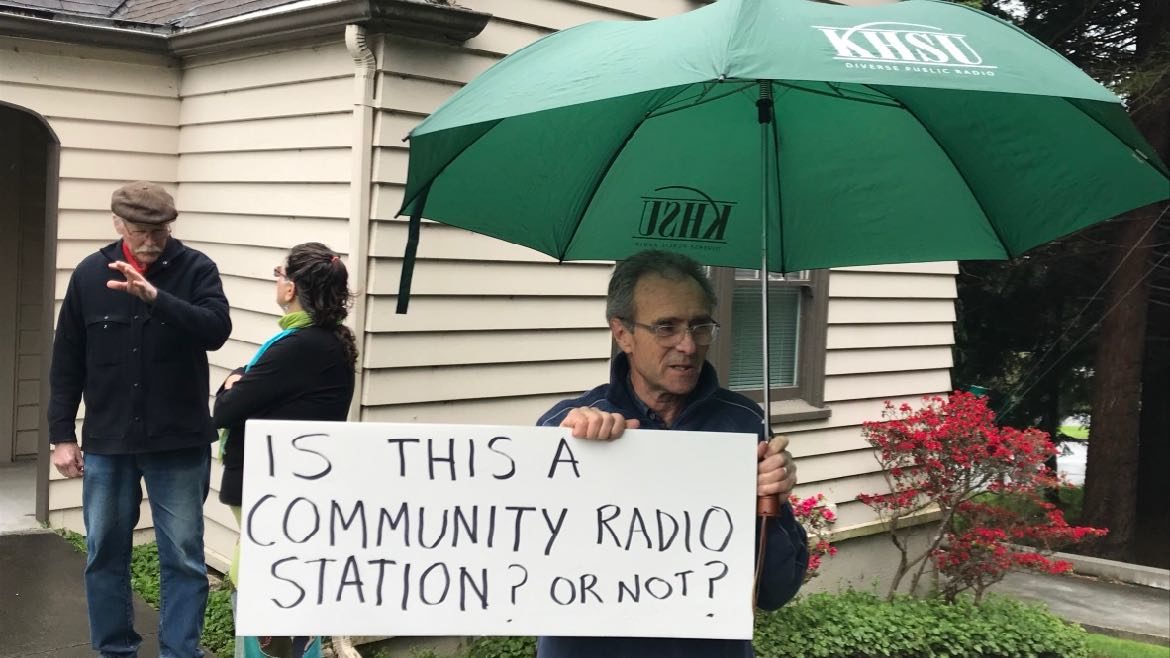 The university licensee of KHSU-FM in Arcata, Calif., is considering the station’s future after cutting most of its staff last month.

A group of community members made an offer to Humboldt State University May 2 to take control of the station, now run by a skeleton staff and airing nationally distributed news and music programs. HSU President Lisa Rossbacher told the group in a Friday letter obtained by Current that the university is “still considering multiple options for KHSU’s future.”

The university laid off seven of KHSU’s staffers April 11, citing a disconnect between its mission and KHSU’s and a need to reduce spending on the station. Layoffs included the station’s GM and chief engineer. KHSU’s two remaining staffers left soon after.

Under the name Friends of KHSU-FM, five former members of the station’s advisory board sent the university a letter of intent offering to take over financial responsibility of the station in exchange for the university essentially donating KHSU’s license, equipment and facilities to the group.

The group offered to provide the university with $120,000 in underwriting on the station over a 10-year period and to provide educational opportunities for HSU students, including unpaid internships.

In the letter to the Friends group, Rossbacher said the university is “still evaluating whether a competitive bidding process would be required to sell or otherwise dispose of any or all KHSU assets. As such, we are not prepared to enter into an exclusive Letter of Intent with Friends of KHSU at this time.”

Rossbacher also told the group that the university will not sell the studio that houses the station to any potential purchaser and will not allow a buyer to use KHSU’s call letters.

HSU spokesperson Frank Whitlatch told Current that the university is in talks with public radio stations “and others” about possible collaborations. He did not rule out a possible sale.

“Our commitment is to do what we can to ensure the area has good access to National Public Radio programming,” he said. But he also said, “I wouldn’t cut out any options.”

The response from the university was “kinda disappointing,” said Geraldine Goldberg, a community member involved with the Friends group. “We are in a holding pattern now.”

“We don’t want to lose a community station,” Goldberg said. “Even though KHSU is a university licensee, we live in a very rural area, and the community participates in a huge way with the station.”

The group was able to raise $5,000 for legal fees and is working to gain 501(c)(3) nonprofit status, which will make it “a lot easier to ask for donations,” Goldberg said. “Because right now, we’ve got a PayPal account.”

‘A slap in the face’

Before the layoffs, KHSU was airing a mix of news and music with local and volunteer-produced programs. The university also indefinitely suspended the station’s community advisory board and the more than 50 volunteers who contributed to programming.

HSU made the changes after receiving a report reviewing the station’s operations by the California State University’s Audit and Advisory Services. The CSU system includes HSU.

The review’s 19 recommendations included adding a governing board and increasing student involvement. It did not call for cutting full-time staff.

Rossbacher requested the review in July 2018 to evaluate KHSU’s “strategic alignment with the university’s mission, operations, administration, oversight practices, and governance,” according to the April 4 report.

“It was clear there were a number of issues occurring at KHSU,” Whitlatch told Current. “Those were really picked up on last summer.” Rossbacher asked for the analysis “so that she could get a good handle on the seriousness of the issues, the extent of the issues,” he said.

Announcing the layoffs, HSU said in a press release that “the changes are intended to address operational challenges at KHSU, prevent further negative impact to the University’s budget, and better align HSU’s financial support with its mission and with opportunities for students.”

The university said it had provided KHSU with an additional $135,000 in funding last year to cover a budget shortfall. According to an audited financial statement for KHSU, the university provided the station with nearly $700,000 in subsidies, facilities and administrative support in fiscal year 2018.

“This year’s projected budget deficit is even larger,” according to the release. The university has reduced overall spending by about $9 million in recent years, according to Whitlatch.

The station needed additional support because fundraising fell short, Whitlatch said, in part due to a listener backlash over the firing of longtime PD Katie Whiteside in May 2018. At the time, GM Peter Fretwell declined to discuss with local media the reason for Whiteside’s dismissal.

The university’s decision to cut KHSU’s staff prompted further pushback from community members and even California lawmakers. “The way this went down was completely avoidable and a slap in the face to Humboldt County and the North Coast,” wrote four current and former state legislators in an April 16 letter to California State University Chancellor Timothy White.

The politicians asked that the university involve the community in future decisions about the station and delay further decisions until a new administration has taken over at HSU. Rossbacher is retiring and a new president is expected to be in place by July 1, according to Whitlatch.

The Humboldt State University Senate also passed a resolution that called the university’s actions “unacceptable,” condemned “the total absence of shared governance in the KHSU decision” and requested that the chancellor reverse the decision and reinstate the station’s staff.