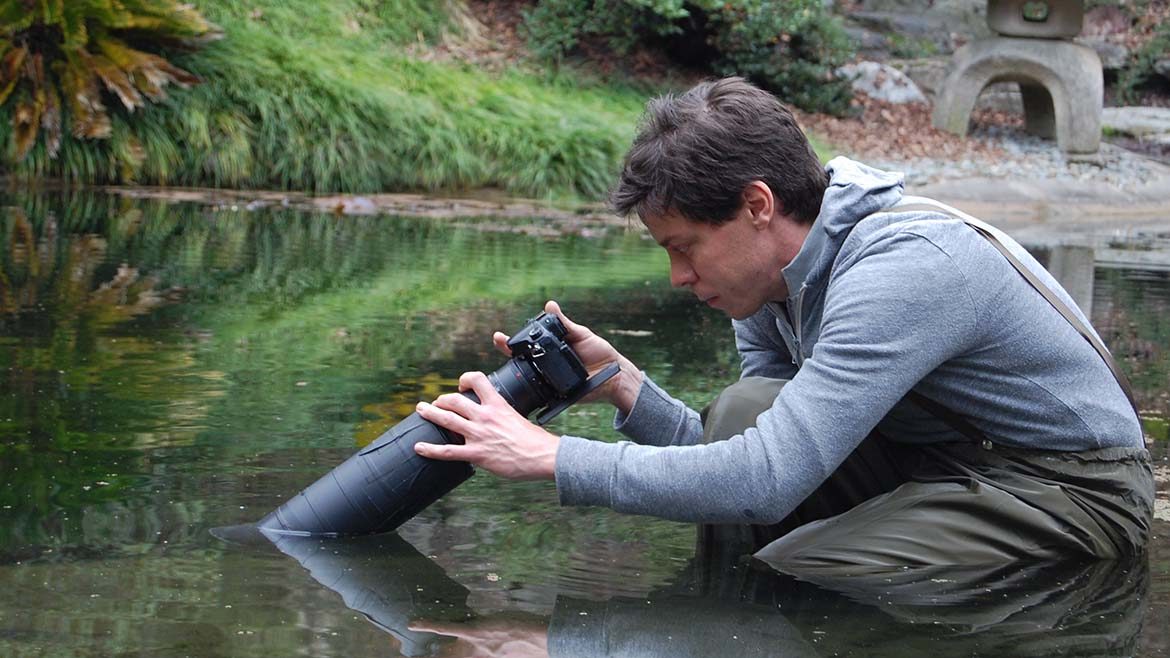 Josh Cassidy, cinematographer and lead producer of KQED's "Deep Look" series, films newts mating in the Japanese pool at the University of California Botanical Garden in Berkeley in Feb. 2015.

The science desk at San Francisco’s KQED is embarking on major research of its own: a deep dive into how millennial audiences consume and engage with scientific news and information.

“Cracking the Code: Influencing Millennial Science Engagement” is a new collaborative project that brings together the expertise of the public broadcaster’s science team with science communication experts in academia. The partners will test ways to increase engagement with KQED science content among audiences within the millennial generation born between 1981 and 1996. The three-year effort is supported by a $3 million grant from the National Science Foundation.

KQED’s staff and the researchers have three main goals for the project:

“The idea grew out of our curiosity about our audiences and really wanting to know more about them and how to better serve them and engage them with our content,” says Sue Ellen McCann, KQED’s executive in charge of science.

Science journalists and producers confidently decide what to cover and how to cover it, McCann says. When it comes to audience behavior, they’re good at having hypotheses but lack research tools that would allow them to draw conclusions. That’s where the social scientists come into play.

“We decided we needed to have the expertise of science communications researchers to help us understand audience research, metrics and measurement and how one could go about proving our professional hunches about our audience,” McCann says.

KQED’s engagement staff, reporters, producers and editors will collaborate with Asheley Landrum of the Science Communication and Cognition Lab of Texas Tech University. Dan Kahan of Yale Law School’s Cultural Cognition Project, a group of psychology, communication, and law specialists who study the science of science communication, will participate as a consultant.

The NSF project expands on Landrum and Kahan’s earlier research developing a way to measure science curiosity. In a 2016 study, their measure of interest in science reliably predicted engagement with a science documentary clip more accurately than measures of science intelligence or education.

Researchers from Jacobs suggested that millennials form a substantial part of public media’s “missing audience” for science media content. Jacobs defined the missing audience as individuals with high levels of science curiosity who do not engage with public media science content at least once per month.

A verification study fielded by KQED’s academic partners in early 2019 affirmed that millennials are high in science curiosity but low in science media consumption. But it did not confirm the Jacobs survey’s findings that millennials are more science curious than other generations, according to KQED’s summary. The differences could be attributed in part to different sampling methods used by the survey companies to recruit participants.

Some survey results confirmed the assumptions of KQED’s staff, McCann says. Online video and social media were top two sources for science content consumption among millennials, for example. And when it came to discovering science media, millennials said they were most likely to rely on their own instincts, rather than recommendations or trusted sources.

In research to be conducted under the grant, KQED and its partners will develop behavioral measures to observe participants’ science media consumption. The researchers will use a variety of strategies including focus groups and additional surveys of a nationally representative panel of both millennials and members of other generations.

The project includes eight three-month cycles focused on specific engagement methods or content types, including science news reports and features, videos, and infographics. Staff relevant to each cycle will have access to the researchers through weekly calls.

With its Deep Look science and nature ultra-HD video series, for example, KQED staff are interested in exploring why viewer demographics skew male, McCann says. Is that because YouTube skews male? Or is the editorial content more engaging to men for other reasons? For news, they’re curious about how editorial voice and tone affect millennial engagement, she says. Will millennial audiences engage more with personal storytelling or science stories that inspire awe and wonder?

McCann had met Kahan through Science Education for New Civic Engagements and Responsibilities, a community of science professionals and educators working to connect science to real world challenges. When KQED was looking to apply for NSF funds to research how to engage millennial audiences with science programming, she contacted him.

Kahan believes it’s important for media professionals to collaborate with researchers who specialize in science communication if the field is to advance, he told Current. He’s especially enthused about the project’s focus on millennials’ engagement.

KQED Science was a natural fit for this research. The broadcaster has made its mark with ambitious multi-platform projects in the past. In 2007, it launched Quest, an audience-driven science and environmental journalism effort that broke down traditional silos between radio, TV, online and education units. Quest, which is also backed by the NSF, expanded into a nationwide science-reporting partnership in 2011, helping other stations develop their own multimedia science units.

KQED’s science unit has worked with audience researchers for both Quest and its Deep Look series, but this is the first time the team has collaborated with academic researchers. The National Academy of Sciences is among the groups that have promoted this kind of practical collaboration as a way to bridge the divide between research and professional practice.

The first test of audience engagement tactics, such as through social media and newsletters, begins in May. “We’re on all these new platforms and we no longer have the control over how our content is fully distributed,” says Sevda Eris, audience engagement manager with KQED Science. “That was an area we wanted to take a look at in a more holistic way.” An outside consultant will also train KQED staff on how to interpret a wide range of analytics data.

With the help of an evaluation consultant, staff plan to analyze their first test results in June and post results shortly thereafter.

“We want to be as transparent as possible with our process,” McCann says. The goal is to share findings in real time as much as possible. “It’s really important that not only KQED benefit, but that it’s something that can be consumed and used and argued over by a larger science journalism and producer community,” she says.

Regular updates, including a larger final report, will be available on the websites of KQED and The Center for the Advancement of Informal Science Education.