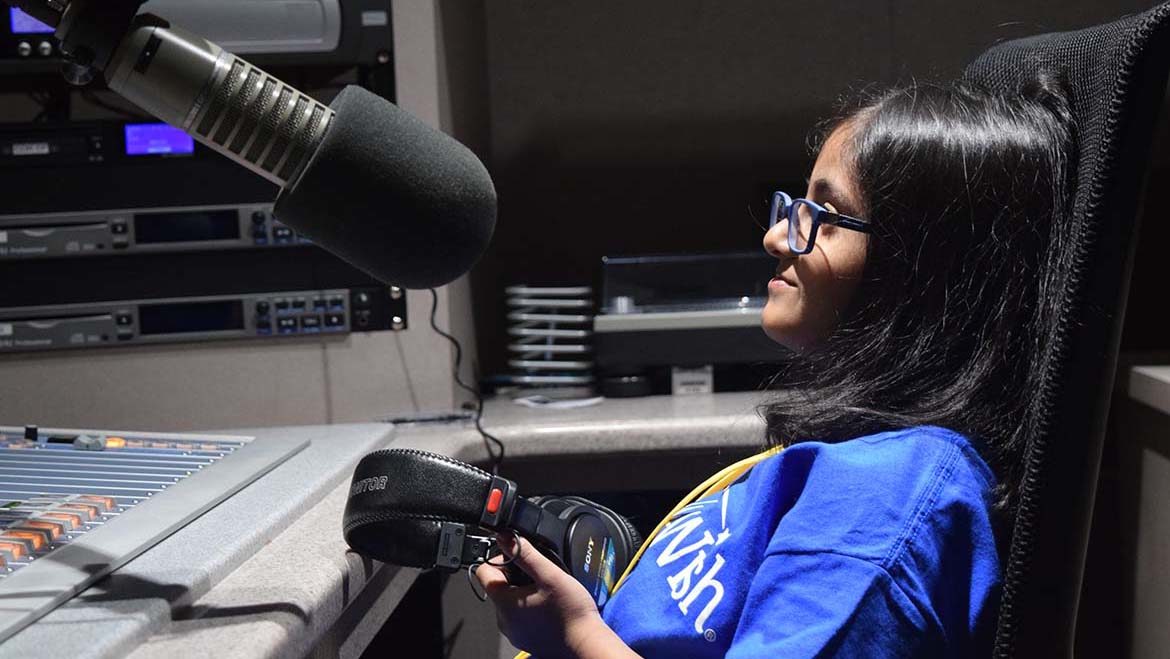 Azka Sharief enjoys the view from inside the WBEZ studio where she recorded her podcast.

When Make-A-Wish Illinois announced it was going to grant the wish of Azka Sharief — a 5-year-old living with a rare metabolic disorder — no one could have guessed what she would request. Not even her parents.

Nearly half of the state’s wish recipients opt for a family vacation to a Disney property. But Azka said she wanted to make a podcast.

“I was looking for her to ask for a vacation trip,” said Fatima Sharief, Azka’s mother. But looking back, there were clues to what she would want to do. Some time ago, after watching a segment about podcasting on a children’s TV show, Azka declared that she wanted to be a podcaster. “Then her big sister, Afifa, helped her make podcasts on my phone.”

Make-a-Wish officials turned to WBEZ in Chicago in mid-March with an unusual request “to make a podcast with a 5-year-old,” said Kevin Dawson, managing director of content development. “We of course were more than happy to help.”

“It was a very clear idea she had,” he said. “She wanted to write a mystery story and read it as a podcast.”

Before meeting Azka, Dawson had never worked on a children’s program. He was a senior executive on WBEZ’s six-part Making Obama podcast series and later joined the staff. He recently worked on Public Official A, a WBEZ podcast about Illinois’ imprisoned former governor, Rod Blagojevich.

Dawson and fellow producer Justin Bull gave Azka a little homework before bringing her into the studios: They asked her to write her story in advance and think of ways they could incorporate sound effects.

Azka had a story in her mind, and her family helped put it in writing, Sharief said. “I asked her to read it once, but her reading was a little boring,” Sharief said. “When we were telling her to try again, she said, ‘Mom, I can handle it.’ But she gave us a big surprise at the radio station!”

While Sharief was surprised by how expressively Azka read her story during the April 10 recording session, Dawson was astounded by how engaged Azka was in the entire process. “She’s actually quite knowledgeable, in a way, about studios,” he said. “She was really fascinated by the microphones, the headphones, even by the concept of talkback.”

Dawson and Bull coached her a bit. Despite what Dawson described as a “party-like atmosphere” in the studio, it only took about 30 minutes for Azka to record her 5-minute podcast, he said.

“It was so much fun,” Azka said. “We got to talk in front of all the people.”

Dawson and Bull wanted Azka to be involved in the entire production process, so they pulled together collections of sound effects and music that could be mixed into her story.

“When we gave her different pieces of music to choose from, she was like, ‘Oh, that one’s not scary enough,’ or ‘That one’s too scary,’” Dawson said. “She knew exactly what she wanted. … And she made some really good selections.”

“Not everybody has a knack to hear what will work,” he said. “She’s a very special little girl.”

While Azka and her family toured the station and enjoyed a party in the conference room — where Azka said they had all of her favorite foods, including pizza, fries, ketchup and apple juice — Dawson and Bull edited the final podcast.

Soon it was time to play the final mix of Azka’s Mystery Podcast: “The Stealer of the Diamonds.”

“She actually said to me, ‘I really want this to go viral,’” Dawson said. “We thought the best way to start was to cram the studio with as many people as possible.”

When Dawson and Bull played the finished podcast for Azka and her family to hear, WBEZ staff gathered in the corridor to listen too.

“Big cheers at the end,” Dawson said. “It was a great lift to everybody’s day to be involved.

“Sometimes it’s easy to forget the simple things in life when we’re all worried about the technicalities of the shows we make,” he said. “It was a very refreshing, heartwarming morning’s work for everybody.”

“It was so much fun,” Azka said about her time at the station. The Sharief family came home with plenty of WBEZ swag. “We got hats and blankets and buttons, and so many stickers,” she said. “Blue stickers, red stickers, green stickers.”

Right now there are no plans for another episode, but Azka, who turns six in May, has more mystery stories to tell. She ended “The Stealer of Diamonds” with the signoff “Next time” and “See you later.”

“The other day, her sister was saying, ‘Everybody is asking for your second podcast. When are you starting?’” Sharief said. Azka replied: “Oh, I have it in my mind. I just have to work on the details.”