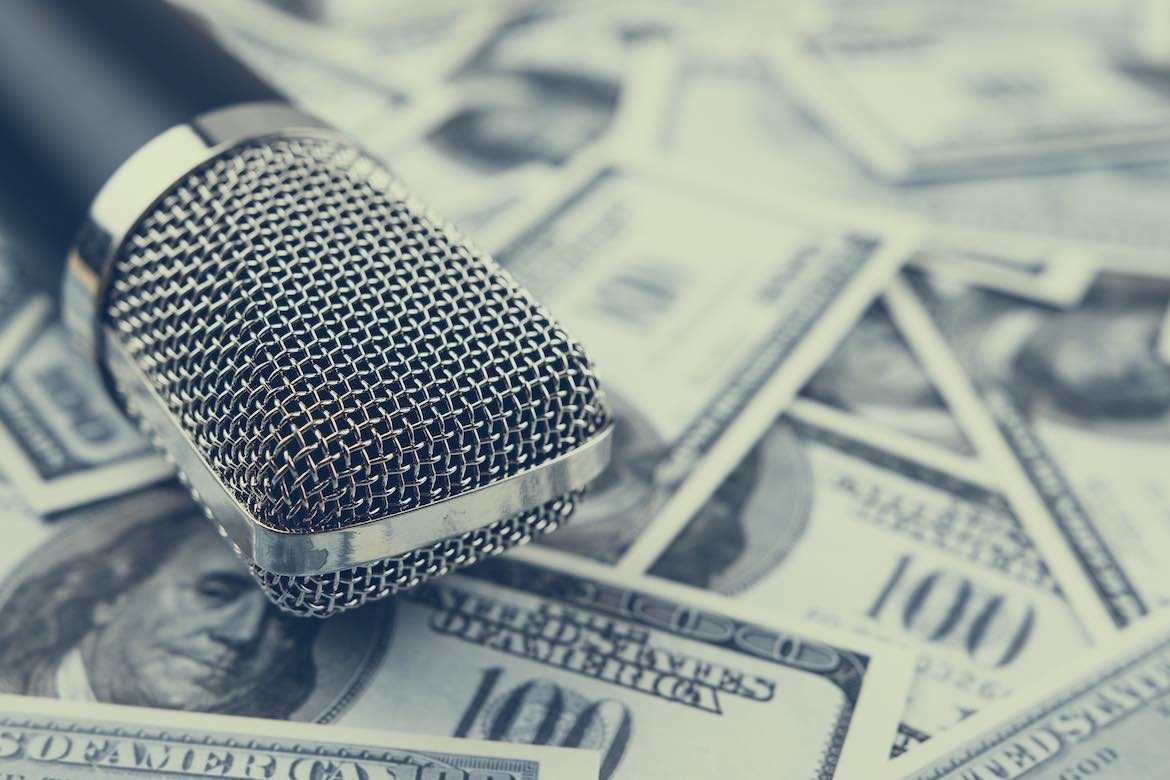 Surely by now you’ve heard the news. Luminary, a new media startup that has been operating in “stealth mode” for several months, has secured $100 million in venture capital to enter the ever-evolving landscape of podcasts. The deal, the largest investment to date in audio, probably has you anxiously wondering: “What does this mean for public media?”

Clearly, speculators see something in the audio space promising enough to take the risk and gamble hundreds of millions of dollars with the big hope that one, if not several players, will capture large chunks of market share. It’s the game Silicon Valley has played since the founding of Stanford University in 1885. Today, many entrepreneurs use the formula in hopes of being the “Netflix of something.”

There are two ways to look at the Luminary deal: Good. And really good. Whether Luminary succeeds or fails, it’s great news for public media, though your nerves might beg to differ. Here’s why:

1. There’s money out there. Yes, there is. And now you have another 100 million reasons to convince major donors, foundations, institutions and individuals to directly fund your podcasting cause.

Lest we forget, Radiotopia, the OG of audience-backed content, was able to raise $620,412 from 21,808 backers in 2014. Money attracts other money. Our industry’s development professionals should be in overdrive with this news and racking up overtime.

There’s another form of “investor” out there — one looking to support social impact. Podcasts around social justice, health care and the environment are places where social-impact investors are looking to fund projects.

2. This is just the beginning. Currently, podcasts are primarily driven by ads. 2019 is expected to see $514 million dollars in ad sales, climbing to $659 million in 2020, according the Interactive Advertising Bureau and PwC. Additional earned revenue driven by podcasts is coming from events, merchandise, branded content production and even the development of intellectual property created by podcasts that have been turned into books, television and movies.

With so much revenue to be had, the market will become flooded with new cash and supporters. There’s no reason why you, public media person, can’t grab a percentage point or two of that revenue.

3. Luminary is “borrowing” the public media business model. While you’ll never hear the words “supported by listeners like you” or a pledge drive on a Luminary podcast, make no mistake: The $8-a-month subscription fee might as well be called a member benefit in the public media space, or, dare we say, a “sustaining membership.”

And what’s even better for a Luminary, and not so much for public media, is there isn’t a department that has to worry about sending a tote bag, coffee mug or socks. Everything is being sent through digital pipes that can scale, without having to attach a postage stamp. If imitation is the sincerest form of flattery, then the Luminaries of the world have no problem borrowing our business model.

4. We have Luminary beat on customer acquisition costs. Member data. Email addresses. Audience cume. Credit card numbers. We have more information on our “customers,” yes, members, then most retailers do. So, what do we do with this data? And how do we convert the more than 37 million people who listen to public radio weekly into donors, sustainers and supporters of new ventures like podcasting?

We need a plan. We need rich and robust audience data driven by audience engagement. Luminary will be starting from scratch on virtually everything aside from talent. In the public media collective, we have the lead, but we’ll get behind if we don’t strategize and act with intention.

5. We know content. Award-winning content. Engaging content. The one thing we know in public media is great audio content. We know how to craft great stories that drive impact. We know the long, hardscrabble road of capturing good tape, venturing into complex stories and communities, fact-checking, editing and mixing. We are good at what we do.

In other words, you can buy a team like the Yankees, but nothing replaces hard-earned respect and elbow grease. But we shouldn’t rest on our laurels either, and I doubt any true producer would.

6. They’re inheriting sins of the father. While it’s hard to tell how diverse Luminary will be when it comes to talent and content, much of the initial podcast slate announced by Luminary will be led and hosted by white men. This second wave appears to be no different than the first wave, when public radio folks jumped ship to cash-rich podcasting companies scooping up top talent that was mostly white. Gimlet and others found themselves in the same spot as public media, lacking diversity across the board.

If there’s one drum we can’t beat enough, it’s the absolute necessity of reaching and connecting to diverse audiences. Public media continues to lag behind in this space, despite the mandate written into the Public Broadcasting Act.

Data from Edison Research has shown an increase in diverse listenership to podcasting, but still, almost 60 percent of podcasts’ ears are white. While the big podcasting companies will be focusing on the most coveted audiences, public media should focus its efforts on diversifying listenership, for the sake of public media’s long-term relevance — not to mention its mission. And the only way to diversify audience is to diversify talent and leadership in public media.

7. Take our talent. Please. If there’s one lesson that everyone should be prepared for, it’s the poaching of talent. The first wave of this gold rush had the Gimlets, BuzzFeeds, Audibles and Panoplys acquiring talent from public media left and right. The agita created by the brain drain from a few years ago is on its way back. And not just because of Luminary, but also the other horses about to join this on-demand audio arms race.

But this gives public media an opportunity to recast the stage. Let’s bring in new voices, new talent, new leadership. And let’s promote the great talent that already exists within our organizations. Public media can compete with VC-backed ventures through creating a better culture, where a true meritocracy embraces talent, takes risks and operates in an open and transparent manner that is mission- and purpose-focused.

8. More platforms means more market opportunity. Streaming platforms like Hulu, Amazon and Netflix went on buying sprees when they launched, purchasing large swaths of content from almost anyone or anything they could get their hands on. Luminary and the like can become a marketplace for all types of public media content, daily shows, weeklies, documentaries, specials, and of course podcasts. Many stations are sitting on hundreds of hours of audio content that, with packaging and rights clearances, could be licensed or even sold to audio platforms like Luminary.

This potential cash boon should be invested to drive even more audio content and, with the right windowing of licensing to audio platforms, doesn’t have to exclude audiences at the expense of a closed system but can rather broaden podcast production and widen points of audio distribution.

9. The pressure of a $100 million gorilla. Consider if a donor, funder or institution demanded a tenfold return on their investment. Given that common VC multiplier, investors are anticipating an exit valuation for Luminary at $1 billion. To perform under that pressure isn’t going to be easy. It’s hard enough to churn out daily shows, let alone drive massive value for investors.

But that’s what makes what we do in public media so special. We don’t have investors; we have supporters. And while that shouldn’t mean we’re off the hook in terms of running our nonprofits smartly and effectively, that pressure of having to exit is something that never needs to distract us from our animating cause: telling great stories that matter.

10. Imagination will drive audio’s expansion. This moment we’re in reminds me of the famous Apple ad narrated by Steve Jobs that begins with “Here’s to the crazy ones. The misfits. The rebels. The troublemakers. The round pegs in the square holes. The ones who see things differently.” Whether you agree or disagree with Luminary’s entry into the marketplace, one thing’s for sure: He and his backers are taking a big risk. And that risk is driven largely in part by an imagination.

Prior to being the founder and CEO of Luminary, Matt Sacks worked at the very VC firm that is now backing his idea, New Enterprise Associates. While at the firm, he was seeking an audio/podcasting company to invest in. When he couldn’t find what he was looking for, he decided to leave the VC firm and create it himself.

Whether Luminary fails or succeeds will come down to several factors. But the one variable Sacks has already succeeded at is doing something versus doing nothing. That’s imagination at work.

This golden age of podcasting is looking more and more like a Wild West. A rush of prospectors are mining for content, audience and the cash needed to pan for audio gold. Something deep inside us feels territorial about the audio space, and many are just sitting on the porch of their radio station watching the podcasting dust cloud getting bigger and bigger, just over the horizon.

Think about it this way — someone with little more than a brand, an Excel spreadsheet and a pitch deck just raised $100 million. Imagine if we put the full weight of our audio knowledge behind our own on-demand audio venture and reaped the rewards of going all in, leaving no cards on the table, leaving no audience to languish and maybe, just maybe, redefining the audio space as public radio always has.

I hope to see you out on the range.

Andrew Ramsammy is founder and CEO of UnitedPublic Strategies, a public media consultancy.

3 thoughts on “How public media should read the Luminary news”