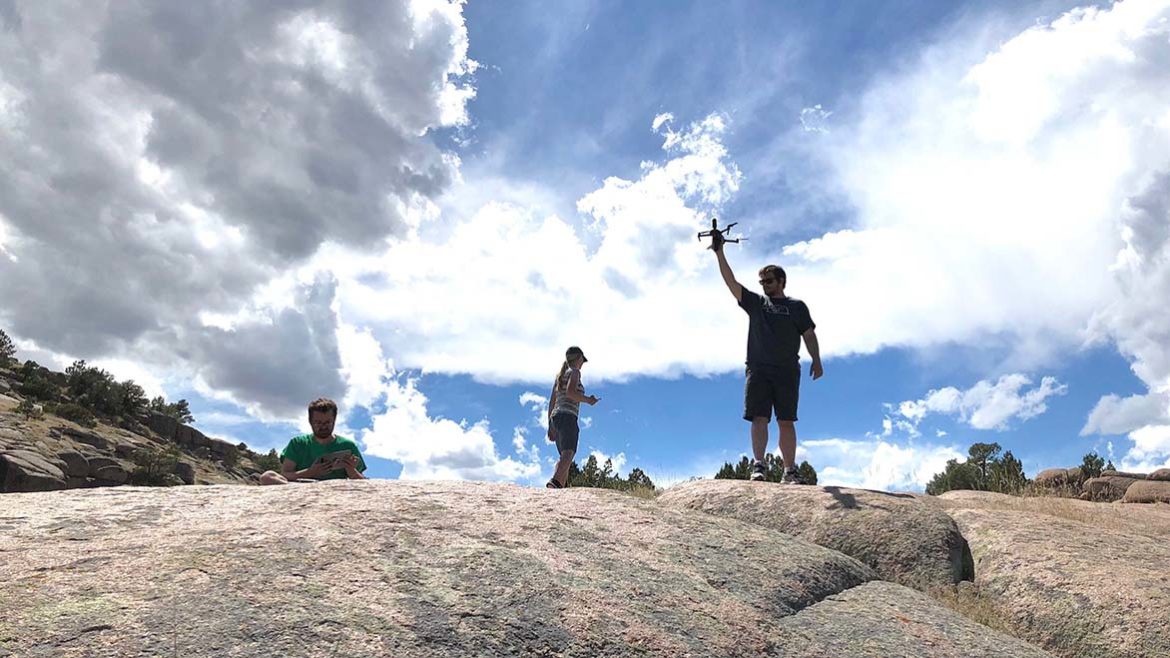 NET's production crew prepares to launch a drone from the rim of Freemont Canyon in Wyoming.

The new web series Watershed, debuting today from Nebraska statewide dual licensee NET, features videography of many expansive landscapes along the Platte River and its tributaries: a snow-covered mountain, an expanse of farmland, a rafter kayaking past an office building on the riverfront.

As you would expect from a public TV production, the scenery is gorgeous. But the series offers something very different to viewers: the power to explore each environment, using screen navigation tools that shift the imagery in each direction.

Filmed with 360-video cameras, Watershed is the latest in NET’s ambitious embrace of immersive media. Since creating a special unit in 2016 to experiment with emerging media formats, the network has shot 50 videos with specialty 360 cameras. It has also created two virtual reality projects and three augmented-reality prototypes.

As the cost of new immersive technologies lowers, NET and a few other pioneering stations are increasingly looking for ways to incorporate immersive media into their missions. Much of that output to date has concentrated on “360,” as 360-degree video is colloquially known. Several stations have launched both big- and small-scale 360 projects in the last three years.

The costs of experimenting aren’t that high, even on a public TV budget. A basic 360 camera can be purchased for roughly $500, though higher-end models run $3,500 or more. The main investments these stations made was to give staff the time and license to learn to work in a new medium.

“I feel very strongly that public media stations should be getting into this space,” said Chad Davis, assistant GM of NET’s nascent Emerging Media division. The time is ripe for public TV to jump into immersive media now, he said, because some of the hype built up by big technology companies’ earlier investments in immersive media has dipped over the past four years.

Davis described this “trough” as declining expectations among consumers, noting that immersive media continue to gain traction in the fields of training and education — where public media can direct its creativity to public service.

“Our feeling is, when you’re in that trough, that’s the time you double down and develop your skills and expertise,” Davis told Current. “It’s going to come out of the trough. I would love if public media is ready to take advantage of the next wave of technological improvements that come down the pipe.”

While NET has concentrated on producing original 360 videos in various genres, KLRU in Austin, Texas, and South Florida PBS in Miami have added 360 components to ongoing programs. Meanwhile, the programming consortium Black Public Media selected two VR projects for this year’s “360 Incubator+” talent development program. The producing fellows are among 10 teams refining their ideas for BPM’s Pitch Black Forum in April, which will award development funds to the top projects.

Representatives of BPM and stations that have experimented with immersive media will be presenting their work at PBS TechCon, to be held April 3–6 in Las Vegas. Davis, a panelist on a station-focused breakout session, plans to give attendees an overview of how to plan and produce projects on a budget.

Immersion by the Platte River

NET execs created the Emerging Media division to test and explore new technologies as they became available. They kept the door open for experimentation, and hired Davis to lead the unit in 2016.

“The definition of ‘emerging media’ changes probably every 18 months or so,” Davis said. “It’s more a mindset than it is a set of specific tools.”

The hardest part of the 360 production process, he said, is “training yourself to think in a sphere, not a frame.” Because audiences can explore every vantage point of a 360 video on their own, producers can’t direct their eyes in the same way they can with more traditional videos.

NET’s first 360 demo, produced in collaboration with the University of Nebraska-Lincoln’s journalism school, took viewers behind the scenes at a cattle auction. Davis saw some of the hidden storytelling opportunities that could emerge from the format: “If you watch it and you do spin around and look at the entire frame of view, there’s a moment where there’s a cowboy sitting there watching cattle being auctioned — while he’s munching on a burger,” he said. “Which is really meta and kind of dark.”

NET invested in basic 360 cameras and continued experimenting with the format. The biggest investment has been the staff time required for field production and editing, Davis said. A 360 production generally requires sending a team of four into the field: a producer, videographer, sound recorder and either a drone pilot or someone to aid with additional camera positioning.

The network scored a hit with its 360 videos on the 2017 solar eclipse. A three-minute video posted on PBS’s Facebook page within days of the eclipse has racked up more than 1.4 million views to date. A longer video, produced by NET’s Brian Seifferlein, incorporated 360 footage from numerous locations around Nebraska. It was featured in last year’s PBS Online Film Festival.

All these experiments were building to NET’s larger goal: to launch a “standalone 360 video series anchored around a particular theme,” Davis said.

That standalone series became Watershed, a co-production between NET and PBS Digital Studios that profiles 16 people who live along the Platte River Watershed and the Greater Platte River Basins. The Platte River is formed by the confluence of two tributaries that originate in Colorado, and it flows through Nebraska into the Missouri River. NET Producer Mary Anne Andrei filmed episodes in three different states along the watershed.

Viewers meet a Colorado snowboarder who held one of the network’s cameras attached to a selfie stick as he boarded downslope. They also visit an Omaha pizza parlor that locally sources its water. With the 360 cameras, the team shot expansive views of every vantage point on their journey. Two editors are working in double-shift sprints to complete the production, Davis said.

The goal of the 16-episode series, Davis said, is to emphasize the interconnectedness of U.S. waterways and demonstrate how people in different living situations nevertheless depend on the same water source.

After the first eight episodes of Watershed premiere on PBS.org and YouTube, they’ll be posted on Facebook in a staggered rollout through next month; the back half of the episodes will arrive in June. NET’s Emerging Media department already has more ambitious projects in the works, including a VR reconstruction of the original University of Nebraska campus in collaboration with the school’s 150th anniversary this year.

Backed by sponsor Apple Music, the station partnered with Google and VR production house SubVRsive on ACL: Backstage. The 10-episode companion series followed artists such as Ed Sheeran, Run The Jewels and Spoon backstage as they prepared for performances at Austin’s Moody Theatre. Other episodes spotlighted different aspects of the Austin music scene.

Chris Ostertag, chief technology officer for KLRU and a former video technology manager for video game website IGN, said the outside partnerships were crucial to the production’s success.

“We brought the show’s history and our long producing experience to the table,” Ostertag told Current. But SubVRsive has “a level of technical expertise that we just didn’t have internally,” he said. “Neither of us could have done this project without the other.”

For a typical shoot SubVRsive brought in a dedicated crew of eight to 10 people, he said. Another three to four staff worked on post-production, and five were involved in negotiating to sort out rights agreements and licensing archival footage.

KLRU premiered its series on YouTube using the Daydream platform, which Google launched in 2016 as an outlet for VR publishers. Videos in the series have garnered around 160,000 views to date.

“It’s interesting to see where your intent succeeds,” Ostertag said. “Did the viewer look where I wanted them to? Did they spend this section marveling at the full sphere, or keep their eyes forward? Did anyone notice that weird thing off to the side? All of that data informs our thinking on how best to use this method of storytelling next time.”

Ostertag was surprised to find most viewers chose to stay within a 180-degree plane, rather than explore the entire 360-degree space. He noted that a new wave of immersive media encourages 180-degree perspectives instead of 360, a change that allows producers to focus on creating environments that viewers are more likely to explore.

Like Davis, Ostertag sees immersive media playing a role in public TV’s future content strategies. “As an industry we’ve been tied to the one-to-many broadcast model for a very long time,” he said. “But as both content creation and distribution have become decentralized and democratized, broadcast has shifted to just one part of a much larger concept of community engagement that also includes interactions and experiences.”

‘You don’t need a huge staff’

South Florida PBS in Miami began working with 360 video in two different ways. Starting In 2016, a consultant worked on production of four videos, an arrangement that helped the station learn to use the technology, according to Charlotte Cushing, multimedia producer.

Additionally, Education Services Manager Penny Bernath began exploring the medium in 2017 after her children gave her a 360 video headset as a Christmas present. She pushed the station to experiment with the technology in its early-childhood program, KidVision Pre-K, which takes children on virtual field trips.

Kidvision I Spy 360° videos, posted on YouTube and Facebook, allow young viewers to explore settings such as a horse farm and a wildlife sanctuary.

“You don’t need a huge staff or department to move into the immersive technology space,” said Cushing. The station produces many of its projects with a team of two people, she said. “Find the people on your staff who are excited about the technology, and invest in their education, so they can learn how to make it themselves.”

South Florida PBS also incorporated 360-video production into its coverage of news and culture.  The station produced a video of a March For Our Lives protest and gave viewers 360 perspectives of the internationally renowned art show Art Basel Miami Beach. South Florida PBS has produced a total of 10 in-house 360 videos to date, she said, in addition to the four produced with the consultant.

The 360 videos attract digital viewers at higher rates than the traditional videos on South Florida PBS’s YouTube and Facebook channels, Cushing said. Average viewership of 360 videos on YouTube is 50 percent higher, and the average watch time is 42 percent longer than videos of its standard format programs.

For the upcoming fiscal year, Cushing said, South Florida PBS aims to produce 20 original 360 videos around topics including education, environment, art and civic engagement. Since the station has already invested in equipment, the primary cost will be staff time, which has been worked into next year’s budget.

The station has also begun work on a VR pilot based on its marine science docuseries Changing Seas. In the pilot, viewers will be able to explore the ocean floor.

“Our leadership believes that as the media landscape changes and new platforms arise, it’s important that public television also evolves,” Cushing said. “to stay relevant for the next generation, and to take full advantage of new ways to inform and educate our community.”