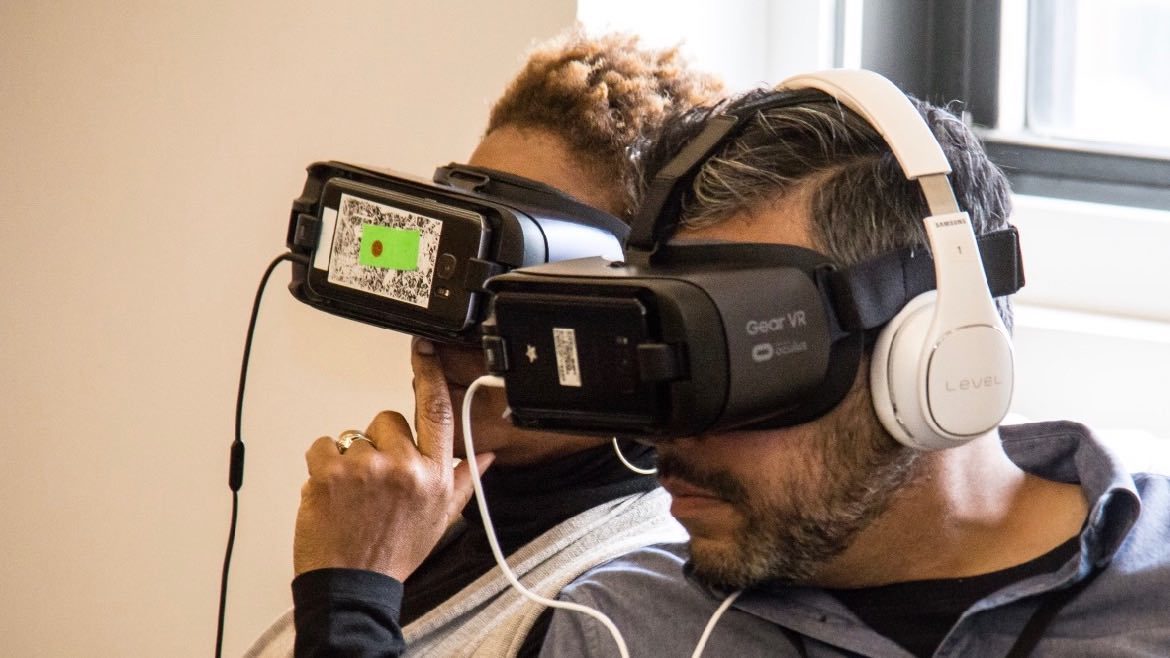 NEW YORK — Creatives attending the first Black Public Media Story Summit April 6 said that after years of black filmmakers playing catch-up and trying to right Hollywood’s racial balance, the technology of virtual reality offers them a chance to start fresh and stamp the emerging medium with black stories and sensibilities.

“We talk about the black renaissance that’s occurring in traditional entertainment,” said Jake Sally, director of immersive development at the cutting-edge, tech-driven motion-picture studio Ryot. “We can avoid [an ebb and flow] if we just start seeding black voices in the beginning in virtual reality,” Sally told the producers, directors, tech experts, funders and distributors who attended the Summit.

“No one is making yacht money in VR right now, but what you can do is have a real impact and fingerprint in the medium,” Sally said.

BPM, the nonprofit organization focused on productions by and about African-Americans, held the summit at the New York City headquarters of Google, a temple of VR innovation. The event aimed to show as well as tell. As filmmakers discussed their craft, attendees wearing VR headsets gasped and spun in their chairs, watching a series of virtual mind-benders.

The VR film “Bashir’s Dream” immerses the viewer in a Syrian city damaged by war.

In the VR film The Dinner Party, an interracial couple relives what might have been an alien abduction. Bashir’s Dream depicts the life of a teenager on a candy run in war-torn Syria. In Zero Days, a five-part companion piece to Participant Media’s 2016 documentary by Alex Gibney, a computer virus hunts for targets in an underground Iranian nuclear facility.

NeuroSpeculative Afro-Feminism is a short VR film set in a futuristic hair salon. Produced by Hyphen-Labs, the complex experience features a 1,000-year–old woman who holds the universe in balance around her silver Afro, a sunblock that won’t blend with dark skin and a visor that reflects unfriendly faces back at themselves.

“We are trying to create a new mythology about what it means to be a black woman,” said Ashley Baccus-Clark, director of research at Hyphen-Labs. “Our goal is to figure out how our minds work, how storytelling can control culture and who gets to talk about the future.”

Throughout the daylong invitation-only gathering, panelists engaged an audience of about 100 in conversations about black content. 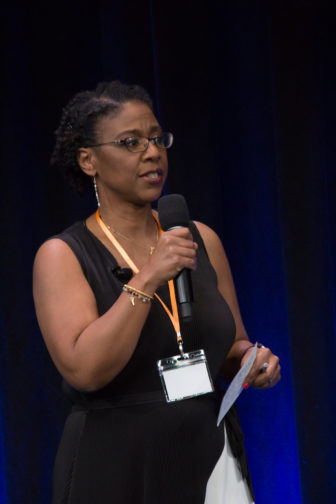 “How do we bolster the pipeline for black content — especially impact content — across all platforms?” asked BPM Executive Director Leslie Fields-Cruz.

Today’s Black Panther high notwithstanding, black content in Hollywood has progressed sporadically, Fields-Cruz told Current. There are upticks, “but then we don’t see [black] stories for a few years,” she said.

Fields-Cruz said her goal is consistency, with a focus on new and emerging media. “Technology is changing,” she said, as is understanding of public tastes and of where content can be found. Traditional “broadcast and cinema might not connect” with viewers, she said.

The Summit was part of Woke!, a BPM series of projects and events aimed at connecting creatives working with new technology to investors and distributors, and funded in part by a 2017 MacArthur Foundation grant.

Fields-Cruz said BPM will include VR and augmented-reality projects in the next call for submissions to its annual 360 Incubator. The incubator pairs about 10 creators with mentors for three months, culminating in BPM’s annual Pitch Black pitch fest in February that showcases projects to funders and distributors.

A lunch session paired activists and creatives to plan VR projects on issues including mass incarceration, community policing, and black women’s health. Through VR, “being able to walk around a solitary confinement cell is absolutely life-changing,” Sally said.

VR producer Amanda Shelby, who arranges collective viewings of virtual-reality films at nonprofit galas, said the events with a VR component “raise double, triple, quadruple the amount of money” of those without. And viewers at universities, museums and festivals have shown they’re willing to pay for VR events and screenings.

At this phase in its development, VR mostly needs content, said experts at the Summit. They acknowledged it is complicated and expensive to make, with postproduction by far the costliest part of the process. Their advice to would-be VR filmmakers included trying to nab a spot in the annual Oculus Launch Pad Boot Camp, sponsored by the Facebook-owned VR company. Virtual-reality media group UploadVR and other vendors offer training classes. A Samsung program loans out equipment.

In terms of funding, a few big players like Google, Samsung and Oculus “are doing a lot of the heavy lifting for people to come in at the early stage to create scripts or storyboards,” or rough cuts, said Sally.

“This is a new medium. You need to do your homework. And it is a lot of homework.”

Correction: An earlier version of this article mistakenly said that Black Public Media will include artificial-intelligence projects in its next call for submissions to its annual 360 Incubator. It will include VR and augmented-reality projects, not AI projects. An earlier version of the article also misrepresented remarks by Jake Sally. Sally said VR filmmakers should move beyond immersion and empathy as defining characteristics of VR content, not that immersion and empathy should be VR’s basic characteristics.