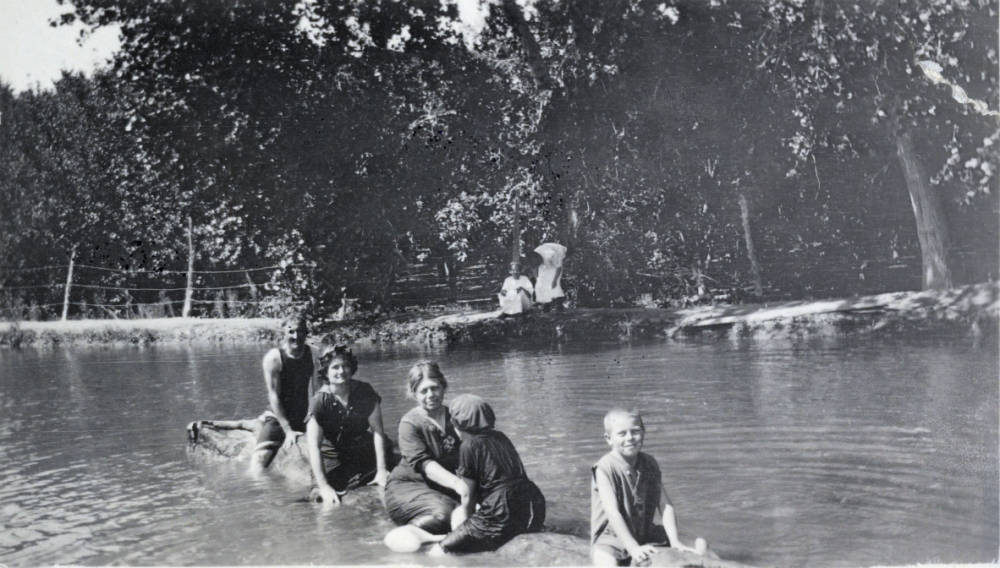 People sit on a log in Indian Springs outside Las Vegas circa early 1900s.

The station will hold two events to collect and digitize photos that show how Las Vegas’ landscape changed from 1960–90, a period of rapid development and population growth. The photos will illustrate the critical role of water in the development of the city’s infrastructure and culture and will be used in a Vegas PBS documentary and other local programming.

The Vegas PBS team working on the project intends for the programming to help establish a stronger feeling of homegrown identity in the Las Vegas community. Nevada is the fastest-growing state, mostly driven by people coming from elsewhere. Only one in four Nevada residents in 2012 were natives to the state, according to a 2014 New York Times analysis.

“We really don’t have our own strong sense of place,” Vegas PBS grant writer Kipp Ortenburger said. “Everybody brings other cultures and heritage from where they’ve come from. We don’t really have that sense of what Las Vegas is beyond the Strip.”

Meanwhile, the city’s long-term residents may throw away their old photos if they don’t see the value in digitizing or keeping them. “If we don’t act now, we might not get some of the gems,” Ortenburger said. “They’ll be gone forever.”

“You need to understand the culture of Las Vegas to be able to make decisions and affect policy in a deeper way,” Bates said. “That way, you are more deeply connected, and hopefully you make better decisions about policy and elections.”

Vegas PBS received a $12,000 grant from the National Endowment for the Humanities to support the project. Half of the grant will be used to promote the events and produce programming. The rest will aid digitizing of the photos by the Special Collections and Archives unit at the University of Nevada Las Vegas Libraries, a partner in the project and frequent collaborator with Vegas PBS.

The photos gathered will be added to UNLV’s catalog. The special collections unit launched its “Building Las Vegas” initiative in 2016 to document the history and growth of Las Vegas through interviews, photographs and records.

Collecting the photos will help fill a visual gap in UNLV’s collections, which has documentation from official sources but lacks images from residents, said Michelle Light, division director of the library’s special collections. She hopes to collect candid photos that show residents’ experience with water and the Vegas landscape.

These could be photos that show recreational uses of water, like residents swimming in pools or running through sprinklers, as well as how water can shape and destroy the environment, such as residents standing in flood waters before flood control infrastructure was built. Photos of undeveloped land that has since been developed could show how available water enabled population growth.

“Visual images tell such a rich story. Nothing conveys the significance of the growth of Las Vegas better than a visual image,” Light said. “We want to get more documentation of that difference over time.”

One event for digitizing photos will be held at the Springs Preserve, a local 180-acre attraction operated by the Las Vegas Valley Water District, another partner in the project. The other event will be at the UNLV library. Vegas PBS aims to hold both events in the fall. Scanners will be set up to digitize photos, and UNLV historians will collect information about photos such as where and when they were taken.

The events will be marketed to members of the Springs Preserve and Vegas PBS as well as on social media, according to Ortenburger. Light said she hopes to get about 100 photos from each event but would be satisfied with fewer as long as they are unique and high-quality.

A Vegas PBS production crew will film the events and interview residents about the stories surrounding the photos, according to Ortenburger. The digital photos will be available in UNLV’s catalogs.

“Because Las Vegas is the largest metropolitan city founded in the 20th century, people are very interested in studying it,” Light said. “This is going to be interesting to not only the residents of Las Vegas but also to researchers around the country.”