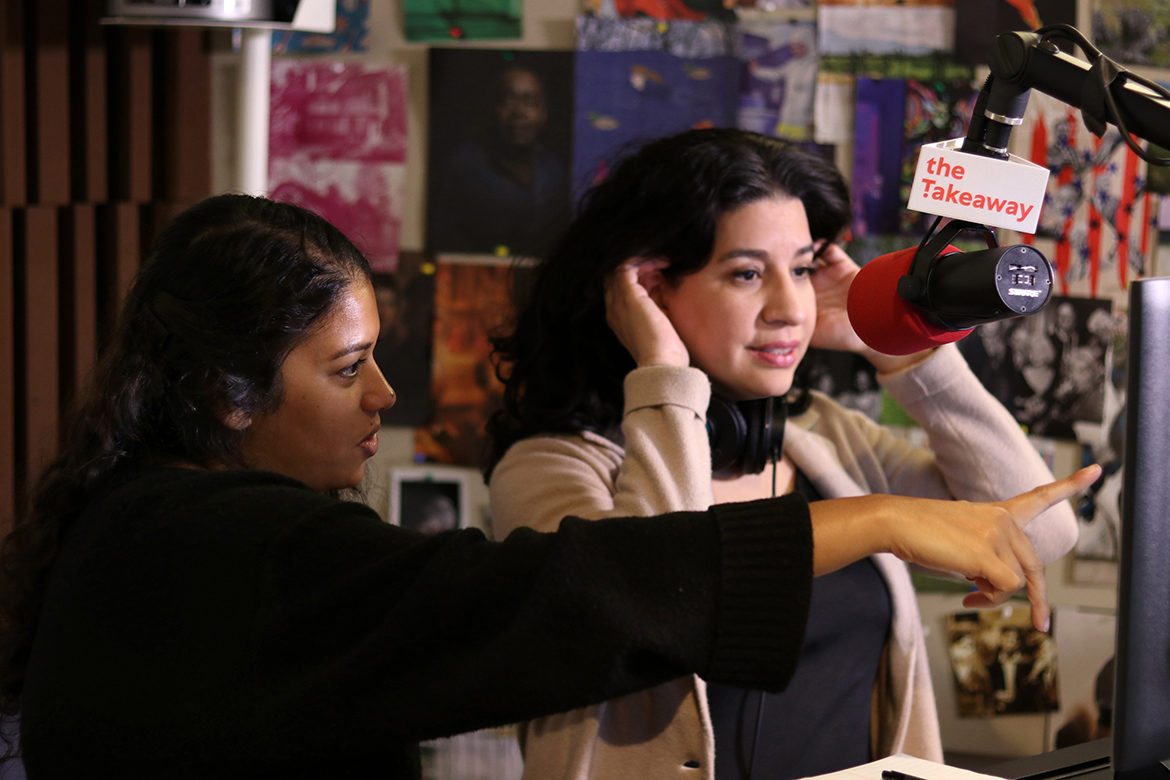 Arwa Gunja, left, and Tanzina Vega work on a broadcast of "The Takeaway."

During its 10 years on the air, The Takeaway has often been described as a work in progress, adapting to public radio’s need for a show that offers something different to listeners.

The co-hosting arrangement wasn’t what producers planned when they started searching for a successor to John Hockenberry, the founding host who retired in August 2017. Months after Hockenberry’s exit, an exposé by The Cut detailed complaints that he had gotten away with harassing and bullying female colleagues throughout his 10 years with the show. The revelations set off a leadership crisis at producing station WNYC in New York City.

It also raised the stakes for The Takeaway, which WNYC co-produces with Public Radio International, to rethink once again whose voices are heard and what stories are told.

“It’s undeniable that there was pressure,” said EP Arwa Gunja, who led the search. WNYC management was under intense scrutiny for its handling of complaints against Hockenberry and other stars. But the need to remake The Takeaway had been clear well before that, she said.

“The understanding that we needed to include other perspectives was always going to be important,” she said.

The decision to hire two hosts emerged organically from the search process, according to Gunja.

Producers introduced Vega, a Latina journalist who previously covered race and inequality for CNN and The New York Times, as host in May. She launched her first broadcast with sound-designed audio of the thumping of a human heart. The clip, created exclusively for her debut program, signaled the urgency of the coverage yet to come.

Her reports have covered black gun owners, surviving the California wildfires and — in a four-part report called “Hysterical: Women and Rage” — cultural responses to female anger. Programmers at several stations expressed admiration for a series of live broadcasts reported from Puerto Rico last September. The Takeaway looked at the aftermath of Hurricane Maria with reporting by Vega, who chronicled stories of survival and reckoned with the legacy of colonialism.

Vega is “hitting on all cylinders,” said Jonathan Blakely, executive director of radio programming at KQED in San Francisco. “She is not what a typical public radio host sounds like, and that is a good thing. Because she is a person of color, her background gives more depth to stories about race, which arguably is most stories today.” 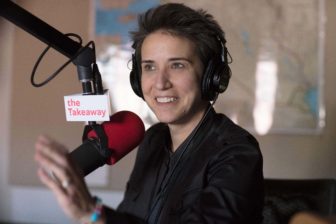 Walter hosts Friday editions of the show from studios in Washington, D.C.

Walter, a regular contributor to PBS NewsHour, had also been a top contender as host of The Takeaway, Gunja said. “We were very eager to … find her a space to do something with us, so we asked her about hosting Fridays.” Those weekly episodes of the show, titled “Politics with Amy Walter,” originate from Washington, D.C., and generally take a deep dive into one or two political or policy stories, such as criminal justice reform or financing of the midterm elections. On a recent show, Walter interviewed TV writers about the challenge of scripting political dramas and comedies during the Trump presidency, when day-to-day news events are often stranger than situations imagined in the writers’ room.

Walter’s timely shows from the nation’s capital give Vega flexibility to focus on analysis and under-reported stories in the news, Gunja said.

Several station programmers gave enthusiastic thumbs-ups to the revamp, praising the new hosts and the daily radio show’s smart and original exploration of race, class, gender and politics in America.

“I love the show. Both of the new hosts are smart and compelling,” said Jackie Sauter,  director of broadcast and digital content at North Country Public Radio in Canton, N.Y., who retired last month. “They have great breadth, but also go deep. It feels to me like a much more open conversation.”

Sauter was especially impressed by the live broadcasts from Puerto Rico. “WNYC deserves a lot of credit. They opened [the show] up wide and took the lead from the new host.”

Lynne Clendenin, VP of programming for Oregon Public Broadcasting, said changes to The Takeaway are resonating with OPB’s listeners. “I have heard people say. ‘I can’t not hear it now,’” she said. “Before, it did not really register as a must-listen. Now, it does.”

Vega approached her hosting role with a clear mission “to put a little more humanity back into public radio,” as she said during an appearance at the Public Radio Program Directors Association conference in Austin, Texas, last August.

The PRI-sponsored session unspooled days after PRI and PRX announced their merger. The soon-to-be-combined distributors used it to showcase their biggest stars.

Vega told PRPD attendees that she looks for holes in both the nation’s psyche and its news coverage, then focuses on finding stories that will help fill them. She described three gaps that The Takeaway seeks to address. “We have an empathy gap in this country. We have a wealth gap and we have a truth gap.” Race, she said, intersects them all.

“What we’re trying to do on The Takeaway is really connect the dots [and] say this is the culmination of events that has an impact, has a context, has a history, and has consequences,” Vega explained.

“We have the prospect of lots of growth on the horizon and we are very excited about what the new year will bring in terms of carriage and growth.” — Arwa Gunja, EP

PRX CEO Kerri Hoffman has been extremely supportive of The Takeaway, Gunja said. “Every meeting has been very enthusiastic about what’s to come and how they can position the show to expand and grow and meet [its] potential.”

Gunja sees the drop as “a natural ebb and flow of station carriage” during the host transition, which is now complete.

“We have the prospect of lots of growth on the horizon and we are very excited about what the new year will bring in terms of carriage and growth,” she said. The revamped format of two hosts covering distinctly different topics gives stations more flexibility, as Walter’s Friday edition can be acquired separately.

According to Gunja, the biggest challenge of this new configuration is managing two different shows.

It’s really “two production teams, two different kinds of audiences,” Gunja said. “I did not realize how much more work two shows would be for me and the staff.” Producers are looking for ways for the two hosts to interact and collaborate more frequently.

Walter and Vega have appeared occasionally on each other’s show or stepped in as subs, but a plan to bring them together consistently hasn’t gelled.

“We’ve talked a lot about how that will work,” said Gunja, including possible co-hosting of a Friday show once in a while. “We haven’t nailed it yet.”

But for station programmers who stuck with the show during the transition, the work-in-progress appears to be progressing just fine.

“I am really thrilled,” said OPB’s Clendenin, calling The Takeaway a show able to contend “with the climate that we are in today. Basically, a very complex world.”

Correction: An earlier version of this story incorrectly said that John Hockenberry hosted The Takeaway for 19 years. He joined WNYC in 2007 and worked on the show for 10 years.

4 thoughts on “With two hosts at helm, ‘The Takeaway’ aims for depth and urgency in covering race and politics”