The licensee of California’s KVCR has laid off 35 TV employees at the station, a year-and-a-half after a rebranding and programming blitz that included the launch of eight local shows.

The San Bernardino Community College District, which holds the licenses for KVCR’s television and radio stations, also declined to renew the contracts of three interim executives, who will leave the station Dec. 31.

The 35 TV staffers let go were temporary, project-based employees whose shows had been discontinued. Their departure leaves the joint licensee with 20 full-time and 22 part-time staff, said SBCCD spokesperson Angel Rodriguez.

“We spent this past year demonstrating that we could develop and produce high-quality programming at KVCR to help expand our mission in the Inland Empire,” said KVCR interim GM Keith Birkfeld in an email. “Going forward we generally want to mitigate production risk and focus on carefully curated projects that achieve our local objectives — especially in this fiscal year as we upgrade our studio and equipment. And beyond that we’ll continue to co-produce with trusted partners or acquire programming that connects with our audience.”

In February, SBCCD will begin a renovation of KVCR’s studios that could take up to a year. It is paying for the upgrade with $16 million of its proceeds from last year’s FCC spectrum auction. The community college sold its spectrum for $157 million, $42 million of which was eventually allocated to KVCR. Along with the sum for renovations, it has devoted $21 million to an endowment and $5 million to operational support.

SBCCD Chancellor Bruce Baron told Current last year that the district would earmark $10 million of the spectrum funds for program production. But by April, that sum was no longer being discussed as the SBCCD board deliberated over use of the funds. 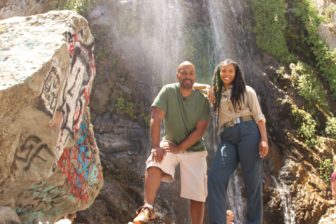 Two of the discontinued local shows were Hidden Hikes, which featured local nature experts exploring trails in Riverside and San Bernardino, and From Scratch, which followed a local family’s DIY projects. Both premiered in October 2017. Other staffers who were let go had worked on two nonfiction series: The Whistle, about California’s earthquake preparedness, and Hopefuls, about young San Bernardino boxing champs. Those aired in the fall.

SBCCD is not planning to replace Kristy or Ralph Cooper, Rodriguez said. SBCCD’s website features a job posting for director of FNX, a position that has not been filled for years. Wright told Current that he will continue to pitch independent projects to FNX.

Rodriguez said the station will restaff, at least partly, and ramp up production again when its studio upgrade is complete. It will fill gaps in its program schedule with PBS fare.

Unveiled in September 2017, KVCR’s rebranding included a new logo, tagline and name, The Empire Network. The area is known as the Inland Empire.

At the time, Chancellor Baron said the strategy aimed in part to make KVCR less reliant on PBS programming and to differentiate it from Los Angeles PBS stations KOCE and KLCS. It also sought to increase KVCR’s appeal to a younger and more racially diverse audience.

To some local supporters of KVCR, the latest staff reductions and shift in programming strategy amount to yet another flip-flop by a broadcaster that has had five general managers since 2012.

“It’s another frustrating change of direction,” said Cassie MacDuff, a local journalist who sat on the board of KVCR’s now-defunct Educational Foundation, which supported the station with fundraising. “The District doesn’t seem to have a consistent vision of what it wants out if its public broadcasting stations.”

Educational Foundation board members were “quite enthusiastic” about the new local productions, said Bill Lemann, a San Bernardino attorney and founding member of the foundation. “But I think at the district itself, the commitment to production is unclear and lacks focus. With all the departures of station staff, things are even less clear than ever.”

SBCCD trustees voted to disband the Educational Foundation in June, a process which is now underway. According to Rodriguez, the college is drafting a new plan “centered on unifying KVCR’s foundation and the district’s foundation and creating one district-wide foundation that will help target larger grants, philanthropic gifts, and business sponsorships.”

“Trustees of the College District feel that the KVCR [Foundation] board is a hindrance” because foundation board members “ask questions and struggle to get answers,” Lemann said.