San Bernardino’s KVCR wants to offer California’s Inland Empire a local voice in the sprawling media market known as Los Angeles. Now, as one of public broadcasting’s biggest winners in the television spectrum auction, it can afford to.

Anticipating a $157 million payout from the FCC later this year, the television station licensed to the San Bernardino Community College District has been staffing up to dramatically expand its local production slate, with three original series rolling out in primetime this fall. A pitch for a Native American–themed national show got an enthusiastic reception from PBS. And the team is devising a strategy to ramp up local news coverage.

“The plan is to dramatically increase local content and create a local news broadcast,” said SBCCD Chancellor Bruce Baron. “We do not have one in the entire Inland Empire.”

While some licensees took the auction as a chance to draw cash out of TV stations with overlapped signals, the college district embraced the sale as a rare opportunity to revitalize and rebrand KVCR and First Nations Experience (FNX), a digital TV channel dedicated to Native American and indigenous cultures. KVCR is a joint license, and plans to add news and lifestyle programs to its radio station as well.

Led by GM Mark Lágrimas, KVCR’s management team will unveil the new production slate and a full rebranding strategy to the college district board next month. The remake includes a new logo, tagline and brand identity. The board is also scheduled to approve operating budgets for the station and the district’s two campuses in September, setting in motion plans to manage and invest the auction proceeds.

“We are trying to reach out to people who should be watching PBS who have not been watching it in the past.” — Mark Lágrimas, KVCR GM

Baron said district leaders see their public media services as core to the college’s mission of serving the students and diverse communities of the Inland Empire, an economically challenged region 50 miles east of Los Angeles.

In other parts of the country, a metropolitan region this populated would be treated as its own Nielsen DMA. But because of its proximity to L.A., San Bernardino has been absorbed by the country’s second-largest television market, Baron explained. Centered in San Bernardino and Riverside counties, the Inland Empire had a population of 4.2 million in the 2010 Census and continues to grow rapidly. Yet all of the news that counts as “local” originates from stations in Los Angeles — “and they only report on Inland Empire if there’s a terrorist attack,” Baron said.

That may sound like an exaggeration, but consider recent events that drew news crews to San Bernardino: the December 2015 mass shooting in which 14 people were killed and 22 injured at an office holiday party for staff of the San Bernardino County Department of Public Health; and this year’s murder-suicide of a teacher and an 8-year-old boy at a San Bernardino elementary school.

The regional economy was hard hit by the 2008 financial crisis, with one of highest foreclosure rates in the country after the collapse of the mortgage market. In the 2010 census, it was ranked the second-poorest big U.S. city, after Detroit.

But now there are shoots of green, with growth fueled by expanding industries. In a semiannual forecast released in April, economists from California State University, Fullerton predicted that the Inland Empire would outpace the rest of Southern California with job growth at rates of 4.4 percent this year and 4.8 percent in 2018. Lágrimas, an entertainment finance analyst and film producer who grew up in San Bernardino, described both the Inland Empire and the station as diamonds in the rough.

The college district provided $320,000 for KVCR TV and radio operations in fiscal year 2016, excluding in-kind support, according to Yendis Battle, chief accountant. The subsidy covered 4.7 percent of the station’s $6.8 million in expenses.

From its spectrum proceeds, KVCR plans to spend $17 million on its transition to a new VHF channel, including equipment upgrades. Pending approval by the college district board, another $10 million is earmarked to finance new productions.

The remaining proceeds are to be invested in a new endowment. Annual interest income will be shared by KVCR and community and campus projects, such the Inland Empire Media Academy, Baron said. The college district plans to upgrade this program into a cross-disciplinary training center for students in media and entertainment, technology and design. A stream of interns from the academy will gain experience at KVCR and, he hopes, provide a pool of talent for Southern California’s many media companies.

The district is still exploring how to structure the endowment, according to Baron. He estimated that up to 50 percent of the annual income would flow to the station annually. “Our goal is to be fair to KVCR,” he said.

The district began laying the foundation for KVCR’s expansion in early 2017 by hiring Lágrimas, who has worked at ABC and MGM, and consulted for numerous industry clients. 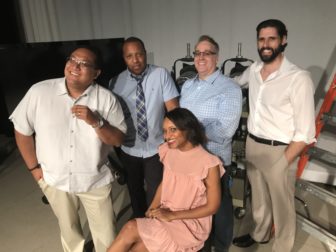 With a mandate to revamp the TV station, he quickly hired two former colleagues from MGM: Keith Birkfeld, an international distribution specialist, is managing director; and Ralph Cooper, a talent agent, is head of development. Kristy Cooper, director of television, has worked at CNN, ESPN and The Pentagon Channel. She is married to Ralph Cooper. Lágrimas also brought in Micah Wright, who directed and co-wrote a 2016 film Lágrimas produced, to head FNX.

Lágrimas is the fourth GM to lead KVCR since 2012. Two left after being put on administrative leave, in 2012 and 2013 respectively. The third, Alfredo Cruz, stepped down in February.

Lágrimas made the ability to hire his own team a condition of accepting the GM job. “I said, ‘If you want me to move … from being at home with my kids and making a movie once a year … , you are going to let me do it in the way I feel is going to help me succeed,’” he recalled.

Since then, his team has been working to build a TV production slate from scratch. Four local series debut this fall, and six others are in production or development for later premieres. A show developed with FNX and pitched to PBS is also in the mix.

Beth Hoppe, PBS chief program executive, said KVCR’s proposal could be a companion to a separate series PBS is planning over the next year.

During a presentation to the college district board in late April, Lágrimas described his goal to create “a drama that is filmed locally and distributed nationally.” The production would be financed by corporate sponsorship, deals with video-on-demand providers and international television sales.

KVCR could potentially commit “seven figures” to a national production that could also be sold in the international market, said Birkfeld. The team is looking for “period shows” with international resonance, he said. “Narratives that involve characters from Europe,” especially Spanish [characters].”

A project on that scale is a heavy lift for any public TV station, let alone KVCR, he acknowledged. “We love the underdog story,” he said. “We are excited to have the question mark, the ‘Really?’ skepticism is a great motivator.” 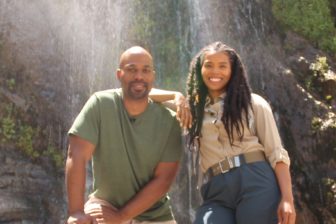 Three original series will debut in primetime this fall. In Hidden Hikes, elementary-school kids and their families trek the San Bernardino forest with local guides. Fighting Chance follows teen boxing hopefuls as they train for the Junior Olympics. From Scratch is a how-to on home improvement, cooking, nutritional education and finances.

This month, KVCR is reviving a signature series, I Remember Television, which features clips of game shows, variety shows and sitcoms of the 1940s and ’50s. The original was hosted by Ed Rothhaar, former station GM who died in 2011. The show returns with a new host on Sunday evenings beginning Aug. 20, and will air in combination with popular episodes from the vault.

Musicology, a showcase for local indie bands, which launched on San Bernardino local access television, will move to KVCR in September. A Latino-focused business talk show, Self-made—with Ed and Liza, will debut in January.

Other series in production or development feature minority communities or offer new twists on familiar public TV genres. Chase ’N Yur Face follows Chase Bailey, an autistic teen cook with a big YouTube following, as he tours local eateries. A variety show highlighting Asians and Pacific Islanders in Hollywood, All-American Asians, is among other shows in the works.

“We are trying to reach out to people who should be watching PBS who have not been watching it in the past,” Lágrimas said. 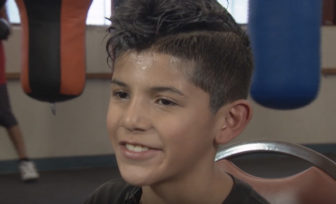 Kenny Lobatoz is one of the young athletes participating in “Fighting Chance.”

Plans for a television news buildout, also pending board approval, would ramp up in three stages, starting as two-minute weekday on-air and online news packages. A feasibility study recommends building on KVCR’s radio news team and strengthening an internship program with the school’s media academy during the second phase.

The goal is to further differentiate KVCR from two other PBS stations in Los Angeles, flagship KOCE and KLCS, which is licensed to the Los Angeles Unified School District. KVCR has participated in the PBS Program Differentiation Plan, a discount service for stations in overlap markets who buy a restricted number of PBS programs and air them on a delayed basis.

KVCR has the smallest audience of all four public TV stations in the market, including independent KCETLink. According to Nielsen data provided by TRAC Media Services, the station’s average rating from October 2016 through mid-June was 0.04. KOCE ranked at the top of the market with an average of 0.19; KCET averaged 0.13 and KLCS, 0.08.

“From a ratings perspective, they are not competitive with the other public television stations in the market,” said Craig Reed, TRAC Media executive director.

Some Los Angeles media experts question whether KVCR is taking on too many productions too quickly, or putting too much emphasis on broadcast.

“I understand they want to come in with a splash…[but] I would go more slowly and really craft my shows and make sure they are top-notch and highly relevant,” said Tammy Trujillo, a professor in the broadcasting program at Mt. San Antonio College in Los Angeles County and a former news host for KPCC-FM in Pasadena.

Given the shift to on-demand viewing, it’s risky to focus too much attention on programming for a broadcast schedule, said Gabriel Kahn, a professor at the University of Southern California Annenberg School for Communications and Journalism. Content needs to be “shareable.”

“If you’re not … developing your brand [digitally], you’re just spinning your wheels,” he said.

Lágrimas recognizes the importance of digital, but also wants to build a vibrant local television station for the region. “In the past, this has not been a destination for people. I am giving them a destination.”

As he realigns staff, Lágrimas is building KVCR’s digital capabilities. A redesign of KVCR’s website launches this month, and developers are working on a KVCR mobile app. He’s also developing an online publication modeled on Flatland, a regional newsmagazine created by KCPT in Kansas City, Mo.

Trujillo observed that mainstream L.A. stations now cover the Inland Empire region in ways that are similar to news reports on Orange County in the late 1980s and early ’90s. Broadcasters really had to break their habits of saying, “‘Down there in Orange County,’ as if it was in some remote place,” she said.

“Inland Empire has been going blue blazes for 25 years,” Trujillo said. “It’s got industry, massive housing. … The freeways have been expanded. … And it still gets treated like a stepchild.”

“It is grown up, and it deserves to have attention,” she added. “I think KVCR is on to something here if they can make it work.”