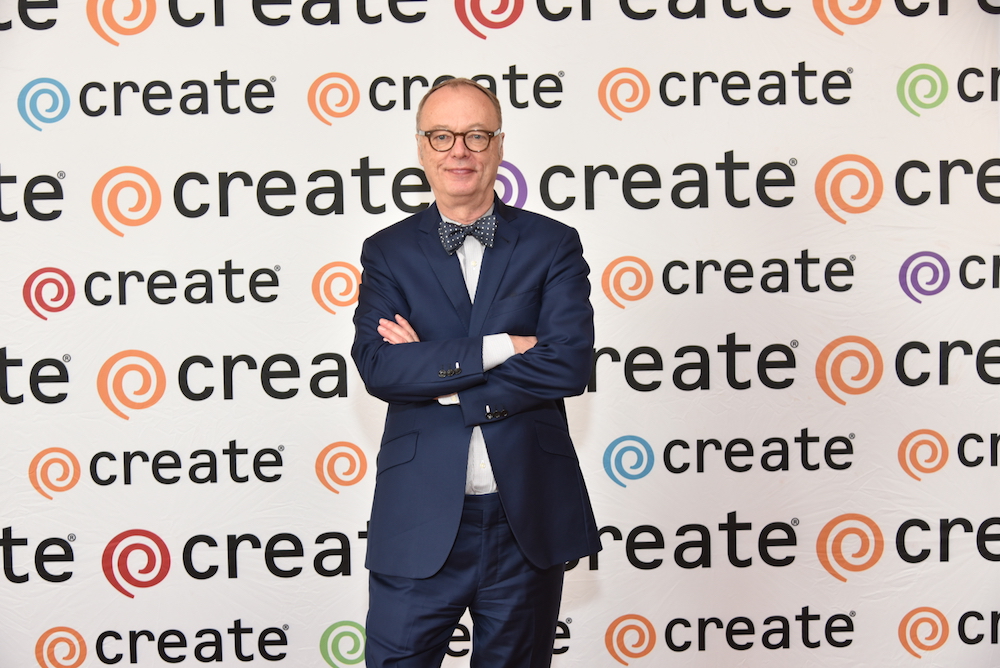 Christopher Kimball Wednesday at the APT Fall Marketplace in Baltimore.

BALTIMORE — Cooking-show host Christopher Kimball has had a busy two years, including launching a new program while defending himself against legal fallout from his very public departure from America’s Test Kitchen, which he helped found.

He’s now into production on Season 3 of Christopher Kimball’s Milk Street, airing in 184 markets. Kimball is embracing a younger audience that is connecting with the international flavor of his new show. And he’s pushing ahead on efforts in food education, including a collaborative nationwide cooking school run by instructors educated in his Boston kitchens.

Meanwhile, the lawsuit against Kimball looms; a final pretrial conference is scheduled for February. In a complaint filed Oct. 31, 2016, America’s Test Kitchen alleged that Kimball “literally and conceptually ripped off” his former program. Kimball answered with a countersuit denying the accusations and seeking damages.

Current caught up with Kimball Wednesday at the annual Fall Marketplace sponsored by his distributor, American Public Television.

Current: What’s been the biggest pleasant surprise for you over the past two years?

Kimball: That people actually showed up at the party. It’s like putting on a huge party. We launched a magazine and TV show, and people showed up. You never really know, right? You just open the doors and say, “We’re ready to go.”

This time, we have a lot of younger fans. The audience is different. I just did some book signings, and the average age is about 20 years younger than it used to be. I think our style of cooking is so different now that it attracts a wider audience.

If you think about it, this is the food they’re eating in the restaurants that they go to. So they’ve had fattoush before, they’ve had tabbouleh and hummus, so a lot of the food is familiar to them. They’ve just never made it at home, or didn’t think they could.

In the old days, I’d ask people what they wanted and give it to them; now, we’re not asking. We’re just saying, look, we think you should make this because it’s great. So editorially it’s a slightly more difficult process, because we’re introducing them to techniques they don’t know. The question was, would they put up with that? The answer is yes.

And what’s been your main challenge?

The real challenge is being ahead enough of your market but not too far ahead. People are willing to take a step ahead, but not five.

So you need to mix it up. Italian food, everyone’s familiar with. So if you do a polenta recipe, that’s going to to be a home run. But if you’re going to do a walnut-sauce chicken from Armenia — that’s chicken, but maybe that’s a little bit more of a stretch. We’re trying to mix it up with the less familiar and the more familiar. So that editorial mix is the tricky part.

How big is the Milk Street staff, compared to what it was at America’s Test Kitchen?

I had close to 200 before, I have about 45 now. It’s a good-sized staff, but we’re doing TV, a weekly radio program, magazines, books, all that stuff. So it’s not a big staff for all that. We also have a cooking school on site and an online cooking school going up next week. So we have lots going on.

Tell us a bit about the Milk Street Cooking School partners.

There’s an association called Gourmet Catalog that has about 350 stores nationwide. They’re independent cooking schools. We have our curriculum, and teachers fly into Boston to take a training class and then they can give our classes.

We’re starting small. We just started giving those this fall, and it’s going really well. So we’ll expand that. We’re in 10 stores as a trial period but hope to have 40 or 50 within a year or so.

Now that you’re up and running, how do you see your relationship with America’s Test Kitchen? Do you consider it as competition?

What’s so interesting about the field is, what you want is to have as many strong cooking shows as possible on the block because more people come to the block. If Lidia [Bastianich of Lidia’s Kitchen] has done very well with her show, it’d be great for Lidia to be a lead-in to my show. It’s not like buying a car, where you’re going to buy one car in five years.

People look at lots of shows and lots of magazines. Especially recipes — people go everywhere for recipes. So I don’t view it as competition, especially on public media. The more the better.

Are you gaining underwriters?

Yes, it’s going really well. We should have a full complement of underwriters for the third season.

I think people wanted to see how we did. There was a little wait-and-see. But now we’re filming a third season, and we’re past that.

There are lots of commercial platforms out there for your content. Why do you remain with public media?

Commercial television would never have me, and I wouldn’t want to be on commercial television. My whole career has been in public media. We’re trying to educate. I’m not there to do a game show, I’m there to teach people something. So where else could we be?

I also think public radio and television is probably the most potent but least marketed brand in America. It’s incredibly powerful. I mean, if you ask people about public television, everybody knows what it is and almost everybody in the country gets it, unlike cable.

I know when I’m at home, public radio is on the whole time. I just turn it on: Vermont Public Radio is on all day. So it’s still destination media.

Is the pending lawsuit a distraction from your work?

That started on Halloween 2016. I was distracted that night, definitely distracted. But I went trick-or-treating anyway.

But after you get through the first six months or so, then it’s just background noise. There’s actually not much going on. So we go for a month without even thinking about it at this point.

I think it’s like everything in life: Something happens, and you need to adjust. And then you adjust, and you move on.

21 thoughts on “Host Kimball on ‘Milk Street’: ‘People showed up at the party’”