Fundraising experts project that 2018 will close with a decline in charitable giving from last calendar year, when most of the nonprofit sector saw an outpouring of donations.

The trend isn’t apparent yet, fundraisers said. But policy changes in Washington and anxieties among the donor class foreshadow the shift.

The period of emotional giving triggered by the 2016 presidential election has passed, fundraising analysts said. The tax law enacted last year has changed the incentives for charitable giving, and donors are feeling anxious about pocketbook issues. These two developments will influence the amounts donors contribute to their favorite causes between now and Dec. 31.

Some predict it won’t be a sharp turn downward. “It’s a return to more normal giving after that big surge in 2017,” said Carol Rhine, principal fundraising analyst with Target Analytics.

“It’s a return to more normal giving after that big surge in 2017.” — Carol Rhine, Target Analytics

Public radio and public television experienced their greatest growth in five consecutive years in 2017, according to the Target Analytics’ State of the System, an annual benchmarking survey for public stations.

The intensity of the national political climate and news cycle, buffeted by back-to-back natural disasters, were key factors that drove the surge of donations in 2017, experts said. Public media donors were especially motivated by President Trump’s policy agenda, including his executive order to curtail the number of visas awarded to refugees from Muslim countries and his threat to eliminate federal funding to public broadcasting. Frustrated by the news out of Washington, donors opened their wallets for nonprofits that made them feel good. Advocacy organizations benefited, but almost every other sector did too, Rhine said.

To project how stations will end up as calendar year 2018 closes, Rhine recommends looking to fiscal year 2016.

Revenues for public radio and public TV increased between 2015 and 2016, but the gains were much smaller, according to State of the System. For radio, donations grew by nearly 3.6 percent; for TV, 1.72 percent. However, the median number of donors dropped. Radio declined 2.5 percent and TV 3.3 percent.

But the longer-term trend is promising. The survey’s FY17 report includes fundraising data from 32 public radio and 46 public TV stations, and represents 3.5 million donors who contribute more than $500 million in revenue. Fifteen public radio and TV stations each reported double-digit donor growth between 2013 and 2017.

The projection of declines in charitable giving — or what Rhine characterized as a return to normal — is based on the Tax Cuts and Jobs Act enacted last year. The law increased the standard tax deduction for charitable giving and placed limits on itemized deductions.

The American Enterprise Institute predicted these changes will reduce the number of taxpayers who itemize in a June 2018 white paper. For example, under the law the standard deduction nearly doubled, to $12,000 for a single person and $24,000 for a married couple in 2018.

“As a result, many taxpayers who otherwise would have deducted their charitable donations as itemizers will now claim the standard deduction and not receive a tax incentive for charitable giving,” the report said. In addition, many donors who do itemize their deductions won’t save as much on their taxes for charitable gifts. 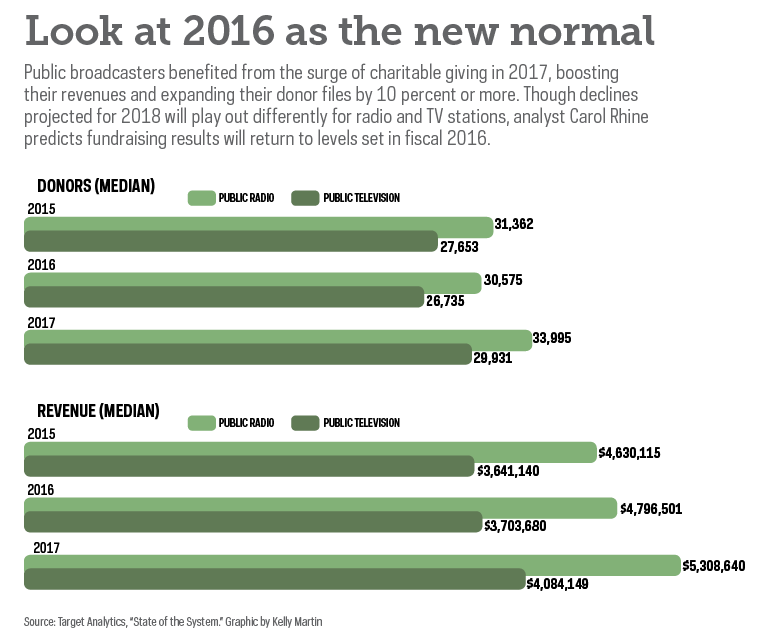 Older Americans, key supporters of public stations, may be anxious about the future of their Social Security and Medicare benefits, Rhine said. They typically respond to these worries by donating less money and contributing to fewer organizations. Public TV stations in particular must make sure they’re top of mind for those donors, “so that if they’re cutting back giving from 12 organizations to 10, you’re in that 10,” Rhine said.

The growth of sustainer giving has placed many stations in comfortable positions to weather the coming shift. The number of public radio sustainers has increased by 13 percent since 2016, according to Target’s State of the System analysis for public broadcasting as a whole. These donors drove 2017 donor and revenue growth for public radio.

In public television, the share of donors making sustaining gifts increased by 6 percent in 2017, the largest percentage hike since 2014, when pitches for sustainer gifts were integrated into national pledge programs. 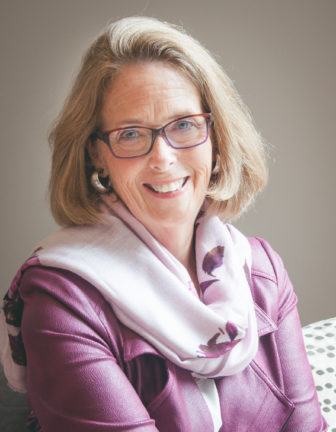 But there’s also a downside to the expansion of public media’s donor rolls, according to Penelope Burk, a fundraising industry leader who sits on Greater Public’s board. Broad-based fundraising programs such as pledge drives, direct mail and online giving are designed to attract a lot of people who give relatively modest gift amounts. These contributors show high levels of engagement and believe in the cause. But the work of maintaining such a high volume of donors can mean that fundraisers have less time to cultivate gifts from major donors. Those development programs require station fundraisers to build individual relationships, a customized high-touch process that can yield much larger gifts.

Public radio and public TV will experience the projected shift in 2018 fundraising differently, Rhine said. Some public radio stations may get a midterm election bump, if they haven’t already. But radio as a whole is more likely to see a return to pre-Trump bump levels because the threat to federal funding has receded, Rhine said.

Meanwhile, the success of Passport, PBS’ streaming service for station donors, shields public television from the anticipated decline. Passport has delivered big donor and revenue growth for stations, according to Rhine. “I don’t think public television is going to see a downturn except for those stations where Passport hasn’t had much impact,” Rhine said.

Stations that haven’t reaped benefits from Passport include those with broadcast reach into Canada — that can’t market Passport as a member benefit to their Canadian donors — and those that don’t pay full price for PBS programs. Stations that buy a limited number of programs through the Program Differentiation Plan have been excluded from Passport, but PBS is reviewing its PDP policy.

Two station-based fundraisers preparing for year-end giving campaigns said they have yet to see a drop off in donations.

“As long as the current administration is in place, I think our funding will remain strong,” said Alice Webber, director of development with KUED in Salt Lake City. “I think people see PBS and NPR as a more balanced way to get your news.”

In fiscal year 2018, which concluded in June, every area of KUED’s fundraising program recorded gains over results from FY17, Webber said. In both years the station’s 13-day August pledge drives exceeded their goals by bringing in pledges of $176,775 (FY17) and $199,901 (FY18).

“People still are doing emotional giving,” Webber said. “I think people who are despairing about the current administration, it just gets deeper and worse, so they continue to give.”

“As long as the current administration is in place, I think our funding will remain strong.” — Alice Webber, KUED

The strong economy has boosted the station’s underwriting, and Passport continues to be lucrative, Webber said. Since introducing the streaming service in February 2016, nearly 50 percent of KUED’s membership are using Passport, Webber said.

“A lot of our individual donors are not necessarily giving for the tax deduction; they’re really giving for the mission,” said Mona Dixon, COO and director of development with the Arkansas Educational Television Foundation. “I don’t think the tax changes will make a significant dent into individual giving. There will be some mid-level givers who may change how they make their gifts,” finding a different way to reduce their tax bill through donations.

But the roiling political climate has made people anxious and uncertain about the future, Dixon said. It’ll be a challenge for fundraisers to keep on-mission by promoting education as the station’s top service. “When the economy was tanking, we actually didn’t have sinking numbers,” she said. “Our members really came through for us. I’m hoping we’ll continue to have that reaction.”

Last calendar year, AETN set new records for several fundraising benchmarks, including the numbers of donors and sustainers, Dixon said. The station got a boost in 2017 through a $100,000 challenge grant, which helped AETN achieve its goal of adding 7,500 new members. “We’ve had a good run,” Dixon said.

Burk agrees that the political climate is still influencing the giving trend. Her firm, Cygnus Applied Research, Inc., surveyed 6,500 donors to Greater Public member stations between mid-March and the first week of May. Twenty-four percent of the respondents said they plan to give more in 2018 than they did in 2017; 59 percent plan to give the same; 7 percent said they would give less; while the rest said it was too soon to tell, according to the survey.

Of the 24 percent who plan to give more, 41 percent said it’s because they’re unhappy about the Trump administration, Burk said. This group of respondents gave this reason as motivation for their giving plans at a higher rate than other survey participants, she said.

As year-end campaigns approach, Burk said stations can do a number of things to boost fundraising. She suggests suspending or significantly reducing costly donor acquisition for the rest of the year. “You need resources to hold on to the donors you already have,” she said.

She recommended several strategies to keep them on board. Before asking donors to make an additional gift, send a progress report on what you’ve accomplished with their contributions this year. Create a very specific year-end appeal that’s tailored to accomplish a specific objective, and describe it in terms donors can understand.

“After they give, they should be thanked with an original, meaningful, personal thank-you letter that talks to and about the donors, instead of talking about the not-for-profit,” Burk said. Follow up with donors who gave to the year-end appeal in early 2019 with a report on the results of their gift. “Don’t solicit them until you fulfill them and the bargain,” Burk said.

It’s also a good time to cultivate individuals who can allocate gifts from donor-advised funds or private foundations, Rhine said. Those donors have already set aside funds for dispersal, Rhine said.

“You need resources to hold on to the donors you already have.” — Penelope Burk, Cygnus Applied Research, Inc.

The best hedge against a potential downturn is to invest in sustainers and mid-level major giving, Rhine said. Sustainers stay on donor files longer, so their lifetime value is higher than people who make one gift at a time. “If you lose any $10,000 donors, it makes a dent in the budget,” Rhine said.

Rhine also advises stations to boost their online appeals. Most working-age adults give online, not in the mail.

“There’s a great deal of potential to attract young donors into your cause or inspire those who are at the ground level to give considerably more money,” Burk said.

Correction: An earlier version of this article incorrectly reported that PBS member stations participating in the Program Differentiation Plan receive a discount on their purchases. PDP stations pay full price for programming.

2 thoughts on “Amid forecast of fundraising declines, pubcasters should focus on sustainers, cultivate major gifts”