Rick Breitenfeld, a retired station executive whose work in the early 1960s helped shape the case for the Public Broadcasting Act, died Friday in Warminster, Pa., following pancreatic cancer. He was 87. 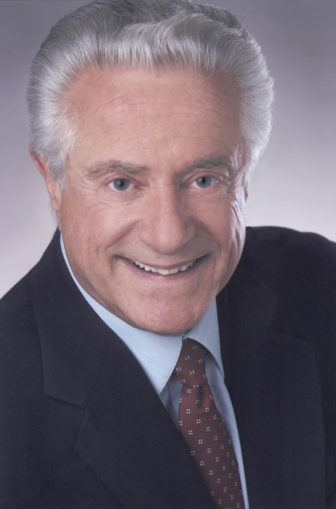 Breitenfeld’s many career achievements include serving as founding executive director of the Maryland Center for Public Broadcasting and leading Maryland Public Television for 17 years; chairing the first board of American Program Service, now American Public Television; leading WHYY in Philadelphia for 14 years; and working as a member of the FCC’s Temporary Commission on Alternate Funding for Public Broadcasting in 1993.

“The word pioneer is often overworked, but in Rick Breitenfeld’s case it’s more than apt,” MPT President Larry Unger said in a statement.

“It was something new,” Breitenfeld said of public TV on an episode of Current’s Made Possible By…, a podcast that celebrated the 50th anniversary of the Act. “We were all excited about the wonderful things we were going to do that we never quite got to.”

In 1966, the Maryland Educational–Cultural Television Commission appointed Breitenfeld as the first executive director of the Maryland center, three years before WMPB in Owings Mills went on the air. Under his leadership the state network grew became a production hub for national series including Wall $treet Week. Breitenfeld also established the station’s reputation as an educational leader by creating the distance-learning Maryland College of the Air and the National University Consortium for Telecommunications in Teaching.

He joined WHYY in Philadelphia in 1983 as president and GM. During Breitenfeld’s tenure, WHYY’s television viewership doubled and its operating budget grew from $8 million to $10 million. In addition, WHYY-FM’s Fresh Air began national distribution through NPR.

In Philadelphia, Breitenfeld “was an inspiring leader, not only for WHYY but for all of public broadcasting,” said station president Bill Marrazzo. “His tenure at WHYY was marked by a period of growth in programming and facilities and, most importantly, dedication to the principle that public media has a critical role to play in communities that extends far beyond being a provider of high-quality radio and television programming.”

At APT starting in 1992, Breitenfeld “played a very important role” as one of its most influential board chairs, said President Cynthia Fenneman. “He worked hard at shaping policies and devising business models with management to identify and build the breadth of programs available to meet the increasing demands for content from local public television stations.”

“Rick is a legend and leaves his remarkable legacy in public media,” Fenneman said. “His wit, intelligence and friendship were superb and will be greatly missed.”

Attorney Larry Miller also said Breitenfeld was “one of the smartest and most humorous people I have known.”

“I was privileged to be one of the lawyers working with him starting from the early ’70s at MPT and through his tenure at WHYY,” Miller said. “Rick was an exemplar for public broadcasting, devoted to public service. He was also a dream client — a quick take on legal issues although, as a former teacher, quite quick with the editing pencil.”

In his nearly two decades at MPT, Unger said, Breitenfeld “gave us significant lessons in leadership, mentoring, and service, all wrapped in a sense of proportion and a sense of humor.”

In addition to his public broadcasting work, Breitenfeld acted in government and industrial training films, as well as in the NBC series Movin’ On. He also appeared as a stand-up comic on CBS. And Breitenfeld portrayed Dr. Arnold Quackenshaw in director John Waters’ 1981 comedy cult classic Polyester.

Breitenfeld was born Sept. 26, 1931 in New York City and grew up in New Rochelle, N.Y. He received his bachelor’s degree in engineering and a master’s in education from Tufts University. He also received a master’s in radio and television and a doctorate in communications from Syracuse University.

He is survived by two children Ann Langtry of Lower Makefield, Pa., and Kathleen Breitenfeld of New York City.

Services are private, with a celebration of his life at a later date.

Memorial donations may be made to the Frederick Breitenfeld Fund, c/o MPT Foundation, Inc., 11767 Owings Mills Blvd., Owings Mills, MD 21117, or to a charity of donor’s choice.