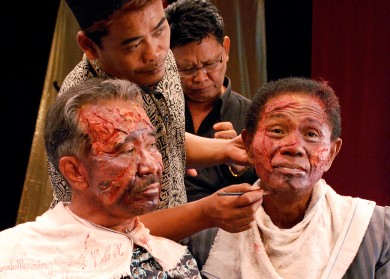 In The Act of Killing, filmmakers had former death-squad murderers in Indonesia restage their crimes as glitzy Hollywood productions using makeup, costumes and even choreography. (Image: Drafthouse Films)

The Act of Killing, a documentary nominated for an Academy Award this morning, will air on the public television showcase POV this summer, EP Simon Kilmurry told Current.

The 2012 film, directed by Joshua Oppenheimer, captures Indonesian death-squad murderers re-enacting their brutal homicides in various cinematic genres, even as musicals. The unique doc has won dozens of awards and critical acclaim: “This is not a movie that lets go of you easily,” wrote A.O. Scott in the New York Times.

POV is also in final negotiations for Cutie and the Boxer, another Oscar nominee for best documentary, Simon said. That film delved into the 40-year marriage of Ushio Shinohara, an artist who paints boxers, and his wife Noriko. The two met in 1969, when she was 19 and he was 41. It was produced and directed by Zachary Heinzerling.