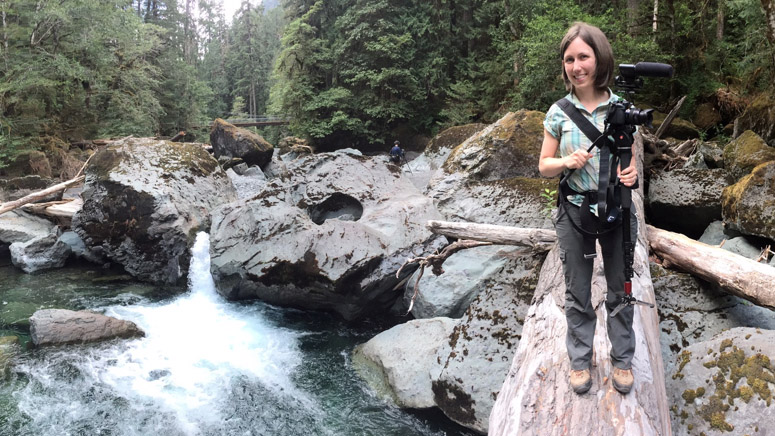 Katie Campbell, a video journalist who now works for ProPublica, on a field shoot for EarthFix.

Within public media there’s been an explosion of journalism collaboration in recent years. It burst from the top down — with grant-funded projects initiated in 2010 by CPB and NPR — and from the ground up, as stations such as KUNC in Greeley, Colo., created their own content-sharing partnerships.

Yet eight years later this collaborative journalism web is not yet woven together in a way that can demonstrate our collective power. Now is the critical time to build a cohesive web and create a brain at the center of these national, regional and local efforts. By setting standards and building connections across this web, we will amplify our voices, expand the reach of our content and dynamically increase our impact.

If this growing public media ecosystem were better connected, editorial coordination across regions or collaborations would become instinctual, if not effortless.

The co-authors of this article have long histories of developing, implementing and leading cross-media journalism collaborations, working within public media but also among commercial media outlets. We believe that the next critical steps require thoughtful, coordinated organizational design and communication — as well as specific tools.

To boil it down into the simplest form possible, we need to build a shared system of journalism collaboration that addresses the following five parameters:

Increasingly, public media is filling the gap left behind by the decline of local news media and the increasing polarization of cable news. In this environment, public media is more than holding its own. In many cases public TV and radio stations are growing by adding reporters, beats and collaborative partnerships — all of this to better provide the kind of enterprising and courageous journalism that our audience demands. When five or six stations band together to cover a region or a subject matter, the team that is created has a greater impact than what a small newsroom can accomplish on its own. Collaborations leverage our power and our influence, allow us to be the first to break important local or regional stories, and to set the media agenda.

The Ohio Valley ReSource, for example, used reporters at four partner stations in two states, and partnered with NPR’s investigative unit, to report on coal baron Jim Justice’s run for governor of West Virginia. They pored over court documents and federal agency records, and found the candidate owed $12 million in unpaid taxes and over $2 million in mine safety violations. Now, in the wake of the West Virginia teacher’s strike, other reporters from commercial media are looking back on that reporting and finding that Justice’s companies still owe millions in rural counties in West Virginia and Kentucky. 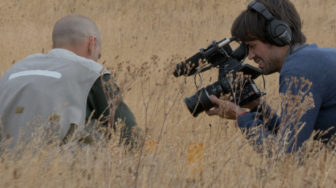 If this growing public media ecosystem were better connected, editorial coordination across regions or collaborations would become instinctual, if not effortless. Right now, coordination is less by design and strategy and is more accidental or informal. Inside Energy, a collaboration of stations in Colorado, Wyoming and North Dakota, sought out collaborative partners in other energy-rich states to provide context and depth to their coverage. They worked with The Allegheny Front in western Pennsylvania, for instance, on a long-form television and radio documentary on the coal industry. Working with EarthFix, a Pacific Northwest collaboration focused on the environment, they partnered to produce coverage of controversial coal-export terminals on the West Coast that could ship coal from Wyoming’s Powder River Basin. Each partnership provided a broader national context for the stories it told.

Such coordination of reporting among stations doesn’t happen enough, and it is far from ingrained in our collective culture. It’s not going to happen on a systemwide basis unless we articulate what success looks like and how we can get there.

A grand vision helps point the direction, but two fundamental needs are just as critical: a set of best standards and practices for public media journalists, and a common language for the journalism we produce. With a shared set of standards and practices — such as how we verify sources and check facts, or our rules for granting anonymity to sources — we set the highest bar for our journalism systemwide.

Moreover, a common language is needed so when we begin to start down this path of intrastate or cross-country collaborations, our interactions aren’t slowed down and complicated by a lack of shared terminology. A standardized stylebook could be documented at a national level, much like AP Style is a standard for copy editing. It would contain a glossary of terms; a set of acceptable audio and video file types, photo formats and sizes; standardized licensing agreements and story lengths; and guidelines for editorial approaches on credits and branding of multimarket content sharing.

To have a fully functional web of journalism collaborations, we need a coordinated neural network — a kind of editorial clearinghouse — to unite our efforts.

What could that accomplish? A coordinated public media network could tackle more complicated issues with a broader lens. Take, for example, The Wall, an award-winning multiplatform series produced by USA Today Network in collaboration with the Arizona Republic and other Gannett-owned media in the Southwest. It took two months to plan and refine story ideas and six months of reporting on Trump’s controversial border wall. The team included a lead project manager, 30 journalists in the field and more than 130 people coordinating video and data journalism across the border area. In the end, dozens of print reports, podcasts, virtual reality maps and video stories were produced on one central and critical topic. 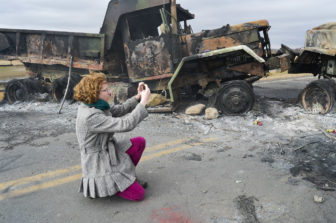 Inside Energy reporter Amy Sisk takes a photo while reporting on the Dakota Access pipeline protests in 2016.

While, arguably, NPR could take the lead in coordinating this kind of coverage, we are proposing that a new separate entity should be formed to create, maintain and sustain interconnections between local, regional and national news-producing entities. It wouldn’t just feed local stories to national organizations like NPR and the PBS NewsHour; it would also connect local stations and regional collaboratives that are producing stories on the same topics.

This coordinating editorial clearinghouse would bring all the strands together. It would work for vertical partnerships — that is, feeding local stories to national — and in horizontal collaborations — moving content across the system. This would be the foundation of a real public media news network.

Why is this not happening now? Because all of us have day jobs running our newsrooms and building new collaborations. With a full-time collaboration clearinghouse, the system will have an honest broker that provides support and connections between all levels of broadcast production — local, regional, national.

We need to be able to track collaborations and build on best practices and lessons learned to ensure that knowledge, sources and stories are shared, and relevant content is distributed across various platforms. This central leadership bridges the gap between collaborative initiatives launched by different entities by sharing best practices in collaboration and agreed-upon editorial standards and reporting practices. It leverages the collaborative whole to demonstrate the collective power of public media.

To reinforce our collaborative network, we also need a shared national system to build awareness and facilitate access to new content. Our collective platforms should be interoperable to promote content exchange, with predetermined content production standards (e.g., common lengths for headlines, subheads and captions) so exchange of content can take place more easily. This is not news for the content producers in public media, who plead with us to build systems that talk with one another so we can remove the tedium of rote production work.

With seed funding from the Wyncote, MacArthur and Knight foundations, the authors of this article have helped build such a system. Channel X is a multimedia content exchange platform used by public radio and television stations. It is a mechanism for browsing, licensing and transferring video-, audio-, photo- and text-based reporting for distribution in communities with common interests. Producers can communicate automatically using a tool that notifies interested followers of new and updated content from that producer.

Channel X service provides a window into a sizable amount of station-to-station reporting being produced today, with more than a thousand multimedia reports live on the site at ChannelX.org. These packages are available to the 96 stations that have registered on the site. If more stations shared content using Channel X, we could collectively view and expand our journalistic collaborations, now and in the future.

Channel X has built this robust exchange even though it requires producers to manually upload and download content. In the future we see power in connecting Channel X’s multimedia content exchange with NPR’s Content Service (formerly known as the Public Media Platform). When these two systems are integrated, a piece of content could be licensed via Channel X and automatically flow through the Content Service to be accessed by a station for use on-air or digitally. The streamlined system will free time for producers to focus on more valuable reporting and production work.

Producers, editors and reporters are pressed for time and resources, and they need to see the benefits of working with other stations to build public media reporting overall. Built into our shared collaborative system should be opportunities for skill development and networking as well as opportunities to extend the reach of each newsroom’s work.

We’ve seen the benefits of “cross-pollination” at the Local Journalism Centers’ Video Production Unit. At first, stories from producers not trained in video were spotty and inconsistent — but very quickly the strength of the short-form videos improved across the board, resulting in greater reporting depth for each individual station and for public media as a whole.

The central editorial clearinghouse could create and maintain a portal to promote public media job openings and showcase reporters, producers and editors available for long- and short-term contracts. It could also provide editorial training for stations large and small, ensuring that a more cohesive, interconnected web of journalists becomes stronger over time.

We applaud all the interest and passion for collaborative journalism in public media today. Our journalists are leaders in an emerging media model that will affect how communities receive news and information that is critical to their health and well-being. But without a common vision, a central clearing house and a interoperable system for sharing, our collective efforts may fail to take hold.

In the end it could result in a “tragedy of the commons” rather than a triumph for our willingness to all take responsibility for creating a new, dynamic journalism model that can strengthen communities around the world.

Alisa Barba most recently served as executive editor of Inside Energy and Fronteras, two CPB-funded local journalism collaborations. She was also NPR’s Western Bureau chief from 1999 through 2010.

Morgan Holm is chief content officer at Oregon Public Broadcasting in Portland and a founder of EarthFix, one of the first CPB-funded LJCs. Since joining OPB, in 1990, he’s helped build the Northwest News Network, a local public radio news reporting collaboration for stations in Oregon, Idaho and Washington.

Alison Scholly is the executive director of Channel X, and managing director of Public Media Company, a national nonprofit that advises public media stations on strategies for growth and innovation. She was COO of WBEZ in Chicago from 2010 to 2015, and worked in multiple digital leadership roles at Tribune Company.