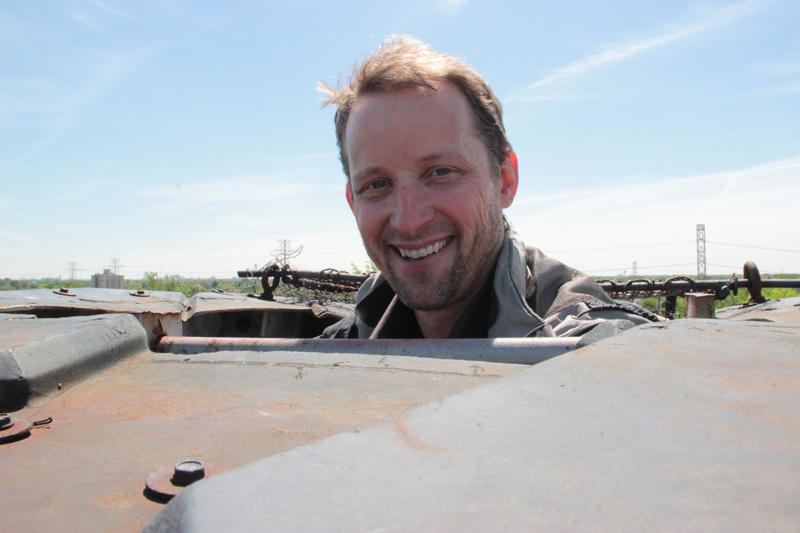 Mark Brush, director of digital media at Michigan Radio and a longtime employee of the station, died Monday of brain cancer, according to a station spokesperson. He was 49.

Brush began working at Michigan Radio in 1998 as a part-time production assistant. He went on to become co-manager of the Great Lakes Radio Consortium, an environmental news service for public radio stations. After GLRC changed its name to The Environment Report, Brush helped expand it to a daily news service. At its peak, the coverage aired on 125 stations.

“He’s touched a lot of lives professionally,” said Lester Graham, a Michigan Radio reporter and host of the station’s Stateside.

Brush’s many awards for his work at Michigan Radio included the station’s first regional Edward R. Murrow Award for investigative journalism and numerous honors he shared with other reporters for coverage of the Flint water crisis.

Brush’s colleagues say he was a beloved presence at the station. “He was both brilliant and modest at the same time. … He always elevated other people’s work first,” said Rebecca Williams, a reporter, producer and host of The Environment Report, now a twice-weekly segment on Michigan Radio. He was also “very, very funny,” Williams said, pointing to a video about cyanobacteria that he helped create.

“Even people who didn’t know him very long are feeling a deep sense of loss,” Graham said. “He’s one of those bright lights you don’t run into very often.”

In an email to station staff, GM Steve Schram called Brush’s death a “profound loss to his work family at Michigan Radio” and said that Brush will be remembered for his “kind, gentle and gracious demeanor.”

“He was also spirited and fun-loving with his co-workers, and above all, always a true professional in every assignment he undertook,” Schram wrote.

Brush was diagnosed in March 2017 with glioblastoma, an aggressive brain cancer. He “bravely sought treatments” in Ann Arbor and took part in clinical trials “in the hope of reversing the advance of the disease,” Schram wrote. “Mark dealt with his condition in an amazing, positive and brave manner,” he said.

Brush taught his children Cecelia and Elias how to create radio stories. When he was diagnosed with glioblastoma, Cecelia made a story about her dad’s cancer and treatment.

“I might want to do what my dad does,” Cecelia said in a University of Michigan article about Brush and Cecelia’s story.

Love and support to @markbrush's family, friends and everyone @MichiganRadio. I heard the news after a long day working at a public radio station. Mark is the reason I can say that. My first boss, a patient mentor, a committed journalist and a kind, kind person.

Two and a half years ago I worked for @markbrush at @MichiganRadio. He was an amazing mentor, one of the kindest people you could ever meet. Mark cared so much about the work he did and the people he worked with.

Stunned to hear today of the loss of @MichiganRadio’s @markbrush — his heart and mind defined public radio at its best. He taught me years ago to remember that behind every politician, fancy title, or piece of rhetoric is a personal story worth digging at

I love you, my best boss. @markbrush — I will NEVER forget how you made me feel or how much you went to bat for me. I will spend the rest of my career as a journalist trying to make you proud. Rest easy.

So sad to hear of the death of @markbrush. He passed after living with brain cancer. One of the finest minds in public media – and one of the finest people. You'll be so missed, Mark.

Sending love to his family, friends and everyone @MichiganRadio.

Brush is survived by his wife, Andrea Tom; children Cecelia and Elias; parents Sally and Tom; and siblings Andy, Bart and Lisa.