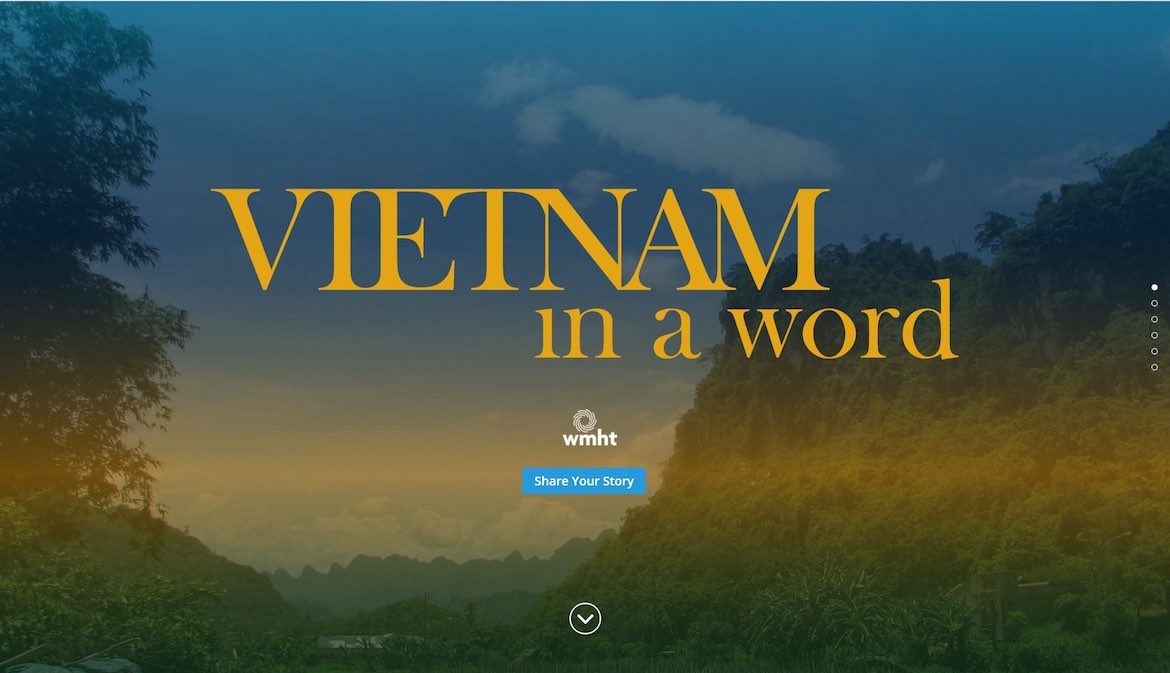 ALBANY, N.Y. — The offices of joint licensee WMHT would blend into its business-park surroundings if not for a protruding broadcast tower throwing its light into the November afternoon sun. Situated between the rowhouse-lined town square of Troy, N.Y., and Albany’s legislator-laden diners, the station’s innocuous digs — like those of many public media stations — don’t scream “community center.” 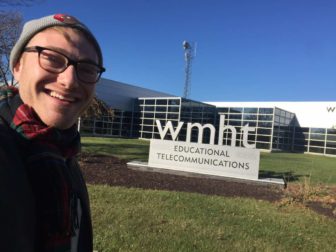 Yet WMHT’s exceptional work in its community is exactly why I was in the station’s parking lot on a biting cold day, a mile from the main road and 175 miles from my Boston home. It’s the first of what’ll be many station visits across the country for this series, In Public, in which I’ll explore the operations of innovative community engagement projects across public media.

As a forever-intern in public media myself (ex-Minnesota Public Radio, ex-NPR, now at the PRX Podcast Garage), I’ve tangentially learned about this work for six years. In Public is our opportunity to dig in together and take some practical lessons back to our own work.

WMHT’s project “Vietnam in a Word” caught my eye with its simple concept and its even more elegant execution: a multimedia and community-driven oral history project, realized as an attractive digital hub for all of the station’s programming related to The Vietnam War, the documentary film by Ken Burns and Lynn Novick. 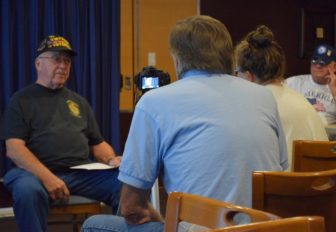 WMHT staffers interview a Vietnam veteran at the Gateway Diner in Albany.

Starting in May, station producers assembled community members to describe their relationships with the Vietnam War in (you guessed it) one word. Their words would go on to form an interactive mosaic of one-word memories, each linking to a story, poem, video or audio clip. The display also anchors a web page that’s a one-stop shop for all of the station’s Vietnam War programming and screenings.

As they tried to broaden the community dialogue about the war, producers sought stories from a variety of community members: veterans, Vietnamese immigrants, folks who were alive during the war, and folks who weren’t. Some shared only one word (e.g., “cruel,” “forgotten,” “brotherhood,” “Why?”), while others provided essays and pictures.

Vietnam veteran Ed Murphy told me that part of the healing process after experiencing war “is about re-experiencing and processing the information. … This was an opportunity to face it, and it also opened questions about the future, about what’s happening now in Iraq and Afghanistan.”

“The project enabled people to re-experience it in a healing way,” added Murphy, who consulted with WMHT on Vietnam in a Word. 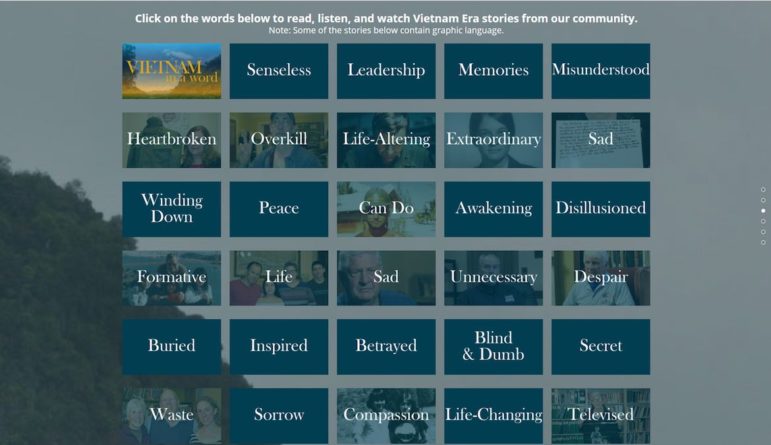 Project managers at the station say they consider Vietnam in a Word a success, both for the number of stories they collected and the audience they reached. At first, they expected to collect around 10 stories; they have 94 so far. The Vietnam in a Word web page held the average reader’s attention for 3 minutes and 49 seconds, two minutes longer than the average for WMHT.org. WMHT’s Facebook post of the Vietnam in a Word slideshow received 84 comments, whereas all of the station’s Facebook posts over the past month received 110 comments combined.

The project’s success can be distilled to the accessible idea of “one word.” If you “simplify and prioritize, you can find a place for the things that matter to your community,” Mary Gribulis, WMHT’s director of digital content, told me as I thawed in the station’s board room. 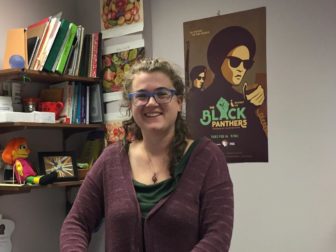 An open platform for all voices, Director of Community Engagement Jenn Baumstein added, is central to the station’s role as a facilitator of community conversation. As it enables these conversations, she said, “we’re really trying to move from convener to leader.”

As it empowers community members to control their story, the project’s philosophy pulls more from public humanities than journalism. “We always work with the folks whose stories are the centerpiece,” Baumstein said, invoking for the first of many times the disabilities rights-era mantra “Never about us without us.”

“Jenn involved people at the ground level early on and made room for people like me to have input,” said Ed Murphy. “I felt like she did the kind of community-organizing side of that to make this work.” 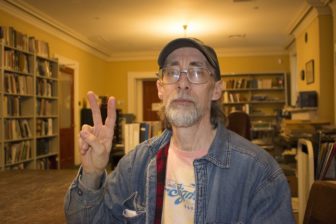 Albany signmaker Frank Smith, who protested the Vietnam War in 1972, contributed the word “overkill” to Vietnam in a Word.

Baumstein developed a broad strategy for gathering stories. She joined a veterans’ group for Friday breakfasts at a local diner, first in July to introduce herself and listen, then in September to record and collect stories. She also gathered stories online, in person at community events and at WMHT’s five Vietnam War screenings, and at a screening of The Wounds We Feel At Home, the station’s documentary about Vietnam veterans in New York’s Capital Region.

It strikes me that, through Vietnam in a Word and in conversation, Baumstein articulates an approach to community engagement that does more than provide touch points, as “engagement” implies. It instead could be thought of as “community coordination” or “community empowerment,” with the station elevating people’s experiences in order to advance community conversation. In telling others’ stories, Baumstein said, “we certainly are the carriers of them, but we’re not the experts. We want to make clear that there are people within the community that have these resources.”

While Baumstein moved forward with community outreach, Gribulis and web content producer Joe Landor used PBS Digital’s Bento platform to build a site for the stories. Gribulis said Bento also proved to be a tool for finding inspiration in the work of other stations and as an efficient sandbox to iterate off of other web builds.

As stories rolled in, she and Landor updated the site to accommodate unexpected file formats, like PDFs, alongside planned YouTube and SoundCloud embeds. “Budget more time than you expect,” Gribulis said, chuckling.

The project is digital both for practical reasons and as a larger statement about accessibility. As a station covering 14 counties, WMHT used the online platform to give a broad range of people the opportunity to choose the extent of their participation. The project also lowered barriers for veterans and survivors, who may not otherwise be comfortable with or able to attend in-person events.

Baumstein and Gribulis said that beyond their own efforts, Vietnam in a Word took significant buy-in throughout the station. The major gifts team helped collect names of potential community partners, and Chris Wienk, VP of radio, melded stories with related classical music to create an hourlong show for the station’s Triple A station. Staffers throughout the building prioritized the project and were guided by its storytellers.

Like many of you, I don’t often work with veterans, I don’t serve 14 counties, and I’ve yet to coordinate an extensive digital build. But the WMHT team’s work does illuminate a few tactics that are useful no matter the organization:

As miles of rolling farmland and Gothic buildings swallow WMHT’s beacon on the horizon, I’m reminded that projects like Vietnam in a Word don’t just exist in theory. They gain life among their communities and live on as practical investments in the quality and longevity of a station.

After all, “public media stations need to exist within a community,” Baumstein said. “Otherwise, why are we here?”

Ian Fox is a freelance writer exploring community engagement programs in public media. In Washington, D.C., he worked in development at NPR and in philanthropic partnerships at The Pew Charitable Trusts while mentoring high school journalists through the YMCA Youth & Government program. He now interns at the podcast app RadioPublic and the PRX Podcast Garage community studio in Allston, Mass. Do you know of an engagement effort that he should highlight in this series? Let him know @IanNFox or IanNFox@gmail.com.

Correction: An earlier version of this article mistakenly referred to The Vietnam War as a Ken Burns film. It is a film by Burns and Lynn Novick.