Association of Independents in Radio New Voices Scholar and KBIA reporter and producer Elena Rivera shared her story at the 2017 Third Coast conference in Chicago, Ill. This transcript has been lightly edited for clarity. 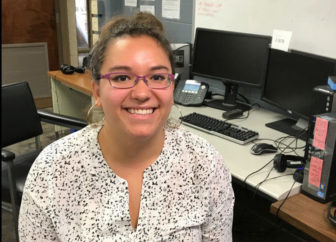 To me, public media means finding the community stories that we tell our friends but that rarely get highlighted when we’re trying to run around covering news.

So I think about the stories that I would tell on my cul-de-sac when I was younger. We would ride around on our bikes, and there was this really big cul-de-sac in the middle, and when it was snowing, they would shove all the snow into the middle and we would use our trash-can lids to slide down it. It was very dangerous.

But then for the weeks after, we would be like, “Who was the bravest? Where did they slide down from? Who almost broke their face open?” I want that kind of vibe of feeling like you’re on the cul-de-sac with all of your friends when you’re in the third grade. Or on your city block, with all of the people that you know in your building and, like, your family is there, and your friends are there.

Ideally, that’s what public media means to me; bringing the community closer together through all of the amazing stories that we have on a daily basis.

I’m hoping to be a bridge between communities. So right now, I’m holding a lot of identities. I’m a grad student, so I’m working on my thesis. I’m working in theory. I’m working in this academic, heady world that is sometimes really scary, or really foreign to people that have never done it. Sometimes, translating academic work is really challenging. Sometimes, journalists are weird and confusing.

But along with being a scholar, I’m also a journalist, so I feel like I’m already bridging that community gap in my work right now, in bringing theory together with the practice of journalism that I do and in enriching the skills that I’m practicing.

I’ve lived in so many different communities in my life. I’ve been a part of so many different groups, and they don’t always talk to each other, but they have a lot of things to say, and what they say is similar. They might just not be saying it to one another. I always have that in my mind with my work: How can these communities talk to one another? They may not all get in a room, but through my story they can all communicate with one another, and tell a story we can share with the world.