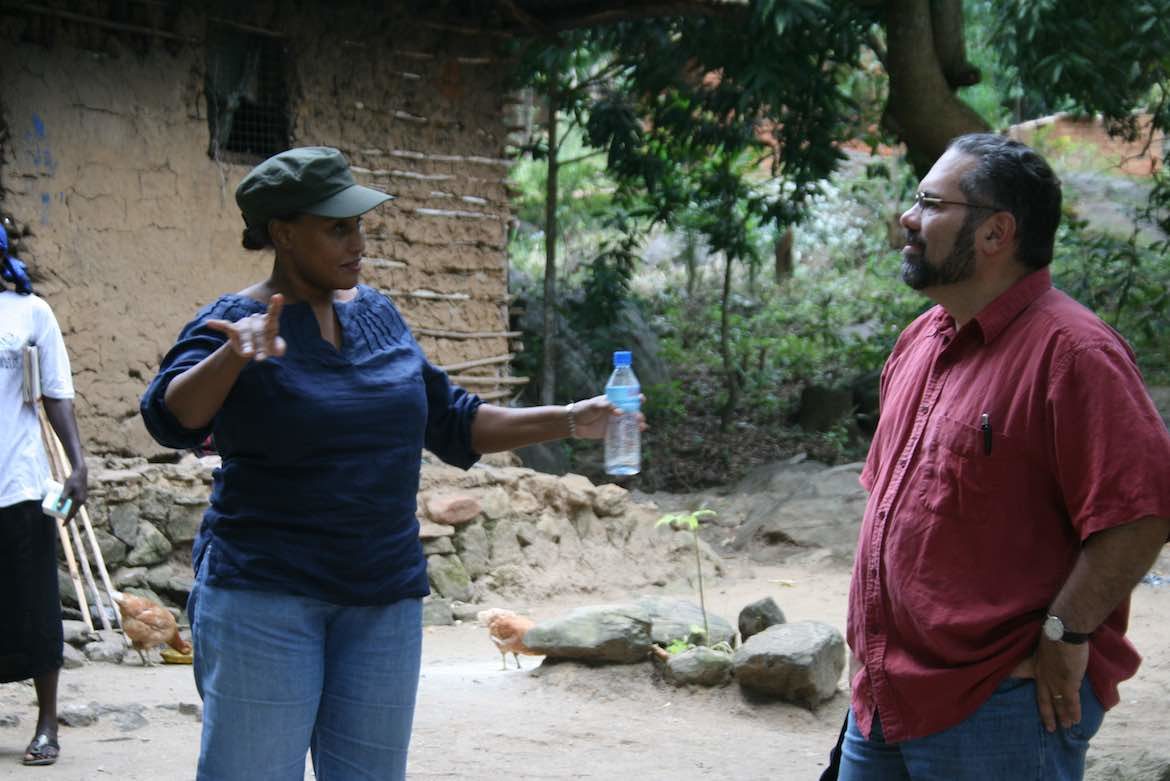 Suarez, right, talks with a local producer during a 2009 "NewsHour" field assignment in Tanzania.

It was my privilege to talk to public broadcasting audiences every day for more than 20 years. If you’ve been in our world, you know these are expected to be unusually “high-touch” jobs.

Our audiences want to see us and talk to us, and often consider it part of their due as listeners, viewers and supporters. I visited stations large and small, and met dedicated, loyal and enthusiastic viewers and listeners in every region of the country.

When someone who had a bone to pick reached me, in person, at the phone on my desk, they would often thank me for being willing to spend time with them. Occasionally I’d remind them, “I work for you. I get a paycheck with a company name on it. But, ultimately, if there’s no you, there’s no job.” Even if they started out angry, they would pause for a moment, and agree.

Public broadcasting was built to answer audience needs that a long-established commercial TV and radio business had chosen not to meet. Cartoons about working-class cavemen and sitcoms about admen married to witches were fine, but those who advocated for a federally funded public system recognized that great programs could be made if you didn’t have to worry about making a profit.

“Every day the work we do helps audiences build a coherent picture of the world they live in.”

As public broadcasting gets ready to blow out 50 virtual and — maybe at some swell Washington party — 50 actual candles, we should be both proud and concerned. Looking back over our footsteps, we can be proud of being potent contributors to the culture, on-air and now online. Looking ahead, we should be concerned about the perils of the continuing march toward breaking audiences up into ever smaller discrete and customized bits. We should consider how we do our work in that transformed landscape.

As I traveled the country visiting stations and speaking to our audiences, I used to remind people that their support made it possible for public broadcasting to make the best product we knew how, and then struggle to find ways to meet them with what we made. In commercial broadcasting, they were the product as much as they were the customer. They, the audience, were being sold to car companies, drug companies and soft drink companies.

Our very DNA — its code written in the words of the Public Broadcasting Act of 1967 — confirmed we were different. Lyndon Johnson, when signing the Act, said, “While we work every day to produce new goods and to create new wealth, we want most of all to enrich man’s spirit. That is the purpose of this Act.”

In the long years I spent in commercial broadcasting, I did good work that I was proud of … sometimes. I knew the stations and networks I worked for saw the audience primarily as consumers. When I came to Washington in 1993 to become the host of NPR’s Talk of the Nation, I was struck by the difference in ethos. We didn’t live in terror of the audience, seeking to placate it long enough, distract it for sufficient time to pump in a few more commercials. For the next 20 years, I worked with colleagues who liked the audience, rather than feared it. They thought of our listeners and viewers not as consumers, but as citizens.

Every day the work we do helps audiences build a coherent picture of the world they live in. That understanding is an absolute precondition for being able to do the work of being an informed citizen in these complicated times. However, like mechanics frantically rebuilding a jet while at 35,000 feet, we are trying to figure out how to reach audiences that may not bother to find their way to a radio or television broadcast. We still fly the plane for the audience that consumes us the old-fashioned way. We have to invent our future while still being what we are to the people who rely on us and play a big role in paying our bills. And it ain’t easy maintaining altitude while the engines that keep you flying at 35,000 feet are running on different fuel.

We reach the audience today in ways that Fred Rogers, Bill Siemering and Robert Conley never could have imagined back in 1967, but we’ve still got plenty of work to do. We should do it convinced of the essential nature of our mission, which remains intact even as the commercial world creates a vast smorgasbord of product inconceivable when President Lyndon Johnson made 47 USC 396 the law.

We are impact players in the culture. In the midst of all our problems and challenges, we have to remember that. Here’s to the next 50 years!

Ray Suarez is the John J. McCloy Visiting Professor of American Studies at Amherst College. He is the former chief national correspondent for the PBS NewsHour and a former host of NPR’s Talk of the Nation.