I was first introduced to public media when I was 6 years old. I was an immigrant child, new to the suburbs of Chicago, and Mr. Rogers was my first English teacher via WTTW. I didn’t realize then that I had become a beneficiary of the best public media had to offer. I also didn’t realize that one day I would want more from public media.

When I joined Radio Arte, a tiny, now-defunct community radio station on Chicago’s southwest side, I still didn’t know what we were doing was called “public media” or that there was an entire “system.” I became attached to it because it allowed me — and several generations of people who looked like me — to tell stories about things we cared about.

While pursuing a degree in journalism, I had the good fortune to intern at WBEZ during the Torey Malatia era. I saw a newsroom with aspirations to make radio that challenged boundaries. As I gained experience, I sought out more work that would allow me to apply my community focus to the mission of public media, especially in creating “programming that involves creative risks and that addresses the needs of unserved and underserved audiences, particularly children and minorities,” as stated in the Public Broadcasting Act of 1967. 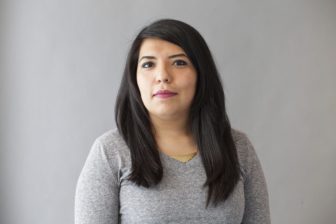 In 2014 I went on the road with the StoryCorps mobile booth. There I saw how far-reaching the ecosystem created by the Public Broadcasting Act actually is. It gave rise to an unruly system of hundreds of stations, each with its unique flavor and goals.

From StoryCorps I went on to manage Finding America, a national effort based at local stations. In this role I became worried that the public media system that shaped me was actually getting farther from its original mission. Here are three problems I observed that deepened my concerns about whether we are fulfilling our mission:

The already chronically underfunded work sets many barriers of entry, even for short-term opportunities and modest budgets. Most gatekeepers are public media lifers, and many of them are great at fundraising. The gatekeeper role exists to bring untested ideas into the system and to vet journalists who may be untraditionally trained. But the work of introducing new ideas often feels like a test that will be judged by a trusted few. Executing grants well does not always mean being fair to the ideas or those who made them happen. Short-term opportunities to do something different often set makers up to execute someone else’s vision of what the system needs, instead of fostering environments to let the best work lead.

Public broadcasting has a diversity problem that trickles down to every aspect of the work. This fuels an obsession to fix public media’s diversity problem with entry-level opportunities or glossy one-offs. These efforts label diversity as “innovation” and, as such, it’s not a requirement of the larger institution. 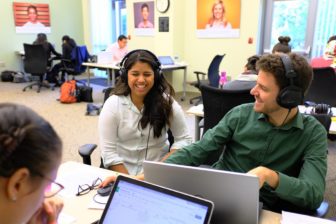 Hilda Flores works with Drew Jostad, an audio engineer for “Marketplace,” at a Next Generation Radio training hosted in October by Capital Public Radio in Sacramento, Calif.

The best work to build integrated newsrooms is sustained over a long period of time and has room at every level for advancement. Next Generation Radio and Vocalo are two long-standing public media operations that get it right. These are smart formats in which the content speaks for their goals.

Not much room to grow

Many of us come to public media because we want to create community impact; our aspirations are often bigger than our paychecks. Yet the exodus of talent is no secret. Some of the most exciting work now is led by expats of public media working at other operations.

A few weeks ago, I sat in the audience of a live taping for the new Gimlet Media podcast Uncivil. I learned more about the history of the Civil War in that hour than in all of my schooling. All I could think was, “Why can’t public media create more content and conversations like this?”

Let’s make more content like Code Switch. It talks about race without making me nervous that it will turn explanatory or patronizing. It brings me new takes and information about things I can relate to. It is the only public media podcast that I subscribe to — not because I think about only topics that concern people of color, but because I rarely get those conversation starters from public radio.

And, yes, I Ieft public media, too, as did my entire team at ProPublica. Deputy editor Terry Parris Jr. came to us from WDET in Detroit. Fellow engagement reporter Ariana Tobin was previously at American Public Media’s Marketplace and WNYC in New York. Logan Jaffe, engagement reporter at ProPublicaIL, was a producer for Curious City at WBEZ. Our work centers around journalism that builds communities to both deepen our stories and galvanize responses to it. We are a team that shares DNA from the Broadcasting Act’s provisions.

If we measure today’s system by the 1967 Act, public media did not age well. It is far from being “a source of alternative services for all the citizens of the Nation.” In its worst light, it is exclusive and predictable. In its best light, it carries the promise of an integrated media service that thinks differently about the communities who need it most.

My mentor Silvia Rivera says “Public media at its best is free education.” I know this is true. Public media is the ripe place to produce creative work that pushes the boundaries of how community, information and journalism interact. If public media organizations big and small don’t embrace that ideal fully and actually — not just in mission but in action — it’ll lose the one thing that makes it so special: the people. The people who aspire to that ideal clock in day in and day out to live up to it, and the people on the other end whose lives could be improved by the public media system.

Adriana Gallardo is an engagement reporter at ProPublica, based in New York City, and serves on the board of the National Federation of Community Broadcasters. In her hometown Chicago, she spent over a decade working in public radio and community media. Most recently she oversaw Finding America, a national series of 15 multimedia projects. She also spent a year traveling the country with the StoryCorps mobile booth.