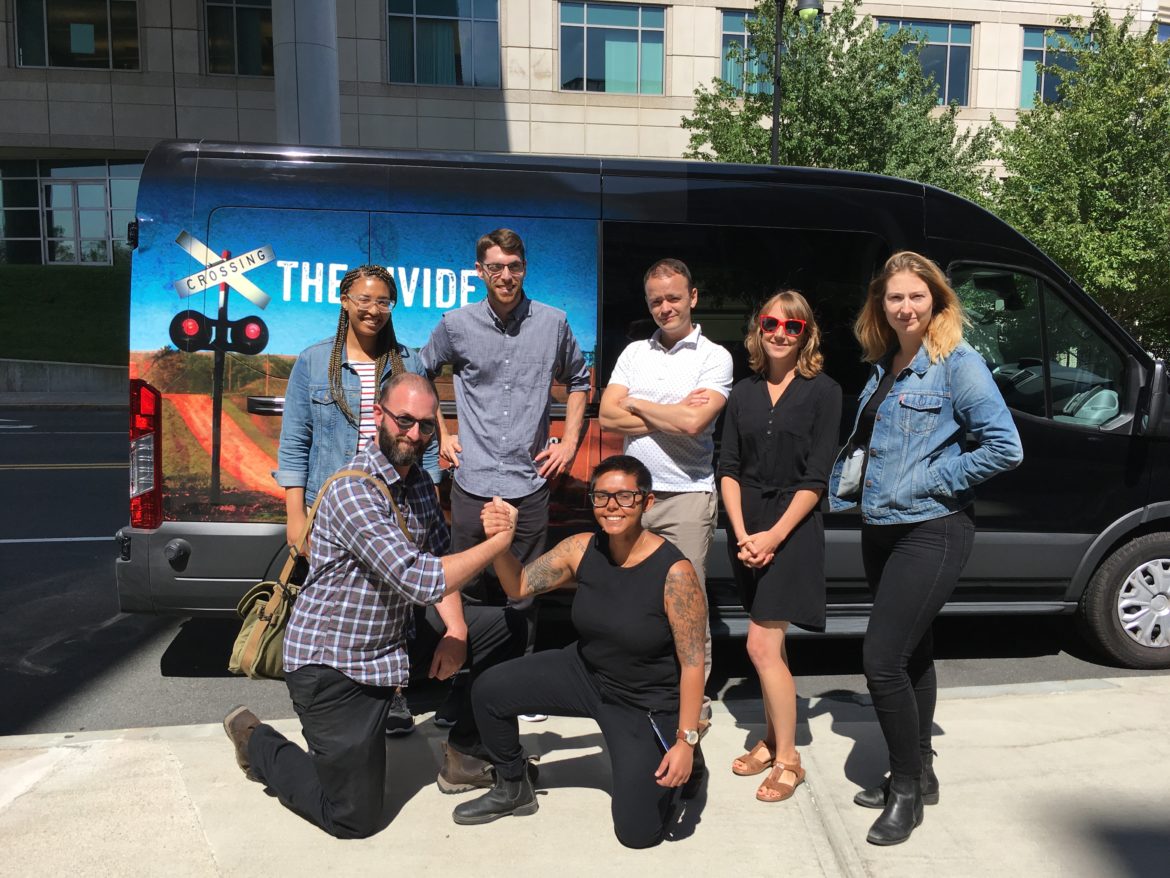 Fellows Mahlia Posey, Eric Bosco, Gabriel Sanchez, Rachel Cramer and Brittany Greeson stand in front of the van they're using to travel across the U.S. At bottom are field producers Ben Brody and Qainat Khan.

A group of young journalists have set out on a road trip to learn about issues that unite and divide Americans.

They’re “Crossing the Divide” — the name of the three-month trip, organized by WGBH and The GroundTruth Project, a nonprofit housed at WGBH that supports fellowships and reporting opportunities for journalists in the U.S. and abroad. The five fellows are documenting their travels through social media and on a highly produced website.

Charlie Sennott, executive director and founder of GroundTruth, said the project addresses a need to restore Americans’ trust in journalism by sending out reporters to listen to community concerns. “We want to be attentive to serious stories that are pulling the country apart, and we also want to be attentive to stories that unite the country and pull people together,” Sennott said.

GroundTruth started the project to build on its support of coverage of social justice issues. Over the last four years, it’s provided 150 reporting fellowships, with many of its fellows focusing on divided societies and struggling democracies.

“We realized last summer before the election that there’s a real deep division and a lot of struggling aspects of our own democracy that we need to pay more attention to.”  — Charles Sennott, GroundTruth

“We realized last summer before the election that there’s a real deep division and a lot of struggling aspects of our own democracy that we need to pay more attention to as an organization that wants to give emerging journalists a chance to do in-depth work,” Sennott said.

GroundTruth received more than 100 applications for five slots. Funders for the project include the Knight Foundation, Solutions Journalism Network, the MacArthur Foundation, The Further Forward Foundation, and the Ethics & Excellence Journalism Foundation.

The universities and local high schools are partnering on the project by hosting events during the trip. GroundTruth and WGBH are partnering with The Moth on community storytelling events in Montana, Minnesota and California. They’re also working with Narrative 4, an international nonprofit that aims to build empathy by encouraging people to share personal narratives, to stage conversations with students in five partner high schools.

After four days of training at WGBH, fellows left from Boston Aug. 30. They have visited local media organizations in Western Massachusetts, including New England Public Radio, whose studios they toured and where they learned about issues at local inner-city schools. They spent time with students who share a building but who attend different schools. One is aimed at high-performing students; the other is considered underperforming. Some argue that the setup has created separate educational paths.

One fellow produced a story about the school for NEPR. Later that evening, the fellows attended a community listening event where panelists spoke about regional issues in education, labor and immigration. Sennott moderated the event at his alma mater, the University of Massachusetts-Amherst.

Destiny Montez, 17, with her girlfriend Jenny, both students at the High School of Commerce, following a day of hanging out at the dog park in a neighboring town. ????: @brittanygreeson #education #xthedivide #massachusetts #journalism

The fellows comprise a photographer, videographer, audio reporter and two writers, one focused on narrative, the other on data.

The group left Western Massachusetts for Kentucky, where they’ve talked with high school students about what it means to be from Appalachia, interviewed the state’s former governor about the Affordable Care Act, visited coal-mining sites and learned about small-scale agriculture.

Participants hosted a Q&A on Instagram Live reflecting on their experience. A reader asked how seeing the states and schools affected their outlook on the nation as a whole. Investigative and data journalist Eric Bosco said he was struck by the similarities among students in Western Massachusetts and Eastern Kentucky. The students came from different backgrounds but told stories based on similar themes, such as finding yourself and struggling with family issues. All told funny stories.