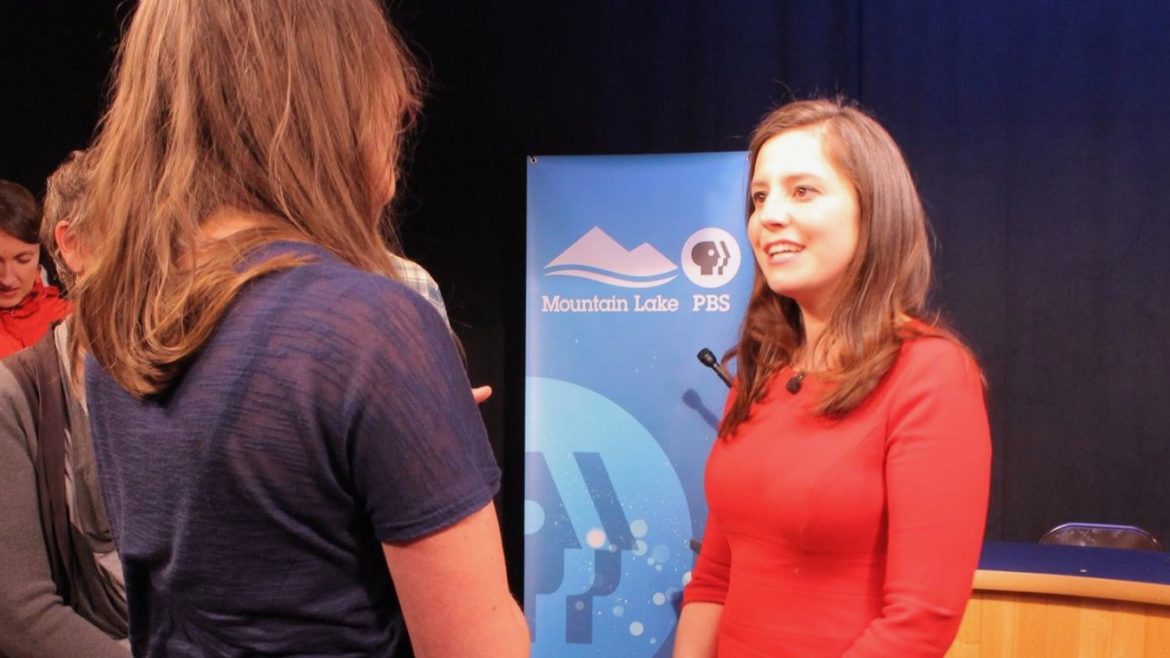 Rep. Elise Stefanik (R-N.Y.) speaks with members of the audience following her May 8 appearance at Mountain Lake PBS in Plattsburgh, N.Y.

With some members of Congress facing angry crowds at town halls, public television stations are starting to open their studios for moderated exchanges between lawmakers and their constituents.

They’re making the effort because “it is fundamentally our mission to act as a catalyst for civic engagement,” said DaWayne Cleckley, spokesperson for WLVT in Bethlehem, Pa.

WLVT is one of at least four stations that have hosted their first congressional town halls this year, enabling elected representatives to have calmer in-person interactions with voters during politically intense times. Each station worked carefully and transparently to fairly seat audiences, allow open questions and host protesters.

Still, risks remain. WLVT discovered that town halls can be disrupted when local police abruptly removed an audience member from its Aug. 31 event. His question, which suggested the daughter of a senator had been kidnapped, “was perceived as a threat,” according to CEO Tim Fallon.

And voters frustrated with lack of access to lawmakers could perceive public TV events as an opportunity for members of Congress “to just get this out of the way, to say they’ve done it,” said Jeff Hughes, broadcast director of WPSU in State College, Pa.

But ultimately, “we felt that even though this wasn’t necessarily the town hall some people were looking for, it was one hour that our congressman had to be in front of people live and answer any question put to him,” Hughes said.

Despite the challenges, all four stations remain open to the possibility of hosting more town halls.

“It was a positive thing for the station,” said Jennifer Kowalczyk, spokesperson for Mountain Lake PBS in Plattsburgh, N.Y. “We saw lots of coverage in outside media, and got a lot of positive feedback from the community.”

That willingness could be important to citizens as the number of in-person congressional town halls wanes. “We’ve really seen a drop-off,” said Sarah Davis, spokesperson for the Town Hall Project, a national group that tracks and advocates for the events. “The trend is going down, and that’s troublesome.”

Lawmakers are facing voters concerned about serious issues surrounding “family or personal job security, or access to health care,” Davis said. While most town halls are “respectful,” some crowds can be “very animated around those topics,” she said.

So members of Congress are turning to more controlled interactions. Some schedule teleconferences with groups of voters, and “oftentimes a member’s staff will select attendees to call and vet the questions in advance,” Davis said. However, she added, those calls aren’t “a true, open-forum town hall where all constituents have an opportunity to share their stories and ask pressing questions.”

Stations have prioritized open interaction. Each also insisted on setting ground rules for the productions but allowed lawmakers’ staffs to assist with security. And all welcomed protesters — some of the groups were larger than audiences inside.

WLVT had been brainstorming with an editorial partner, the local Morning Call newspaper, when Sen. Pat Toomey (R-Pa.) reached out to the station about a town hall, said Laura McHugh, director of production. McHugh also hosted and moderated the program.

McHugh said the station had about two weeks to plan. She called on the chair of media ethics at Loyola University Chicago for advice. “What I took away is, transparency,” she said. “When you make a decision, tell people how and why you made it.”

Toomey’s staff had “no editorial input at all,” she said, but did handle security. 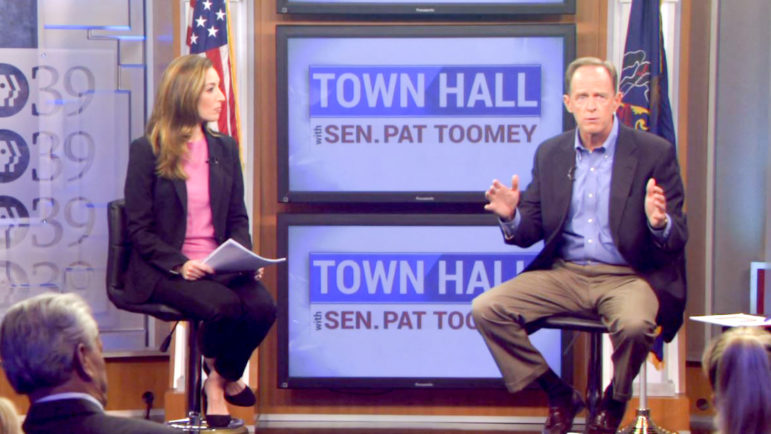 Although WLVT had never produced a congressional town hall, it had presented many candidate debates. So the station handled tickets as it had for debates: Six tickets were given to each of four groups, two from each political party in two counties, to distribute. Tickets were also available to the public via online reservations.

Anyone could submit questions online, which around 400 people did. Station reps spoke with protesters to gauge their concerns and included those topics in the broadcast.

Protesters were given a space on the property, Fallon said. “We are an organization that is inviting to our community,” he said. “The demonstration was peaceful and appropriate.” Protesters gathered in front of the building and on the nearby town square. Their presence was acknowledged in the broadcast, McHugh said.

Forty-four minutes into the live event, an attendee mentioned Toomey’s daughter by name when asking a question about the deportation of immigrants. According to the Pittsburgh Post-Gazette, questioner Simon Radecki said: “We’ve been here for a while. You probably haven’t seen the news. Can you confirm whether or not your daughter Bridget has been kidnapped?” Radecki was immediately “asked to leave” by local police, spokesperson Cleckley said.

Radecki later told the Post-Gazette that he wanted to ask the senator about his stance on Deferred Action for Childhood Arrivals (DACA), which protects certain young undocumented immigrants from deportation. President Trump recently signaled his intention to end the program unless Congress acts within six months.

“The reason why this person was removed,” Fallon said, “was that the question was perceived as a threat because of the way it was phrased.”

Bethlehem’s police chief did not return calls from Current about the status of charges against Radecki.

The station also removed the audio of Radecki’s question from an archived video because it stated the daughter’s name. At the event, the question “sounded frightening,” Cleckley said, and the police officers removing him “accentuated that threat level.”

“While Toomey is a public official,” Cleckley said, “a child is not.” For WLVT, leaving the daughter’s name in the video “was an issue of concern around the safety of the child named in the question.”

Fallon said that despite the incident, “I was extremely pleased with the program from a production-value standpoint as well as interaction with the senator.”

“The majority of questioners were not supporters of him or his politics,” Fallon said, referring to Toomey. “And with the exception of that one question, all were respectful.”

“It was an appropriate discourse: no screaming, civil,” Fallon added. “That’s what public media is all about.”

Mountain Lake PBS held its event May 8 with Rep. Elise Stefanik (R-N.Y.) after CEO Bill McColgan extended the offer. “We’d been hearing a lot of chatter around town — people wanted us to have her here,” spokesperson Kowalczyk said.

Participants had 10 days to register online or by voicemail for a ticket lottery for the 100-seat studio. The station also made a video recording of Kowalczyk announcing the winning names, “just in case” anyone wanted to watch later, she said. 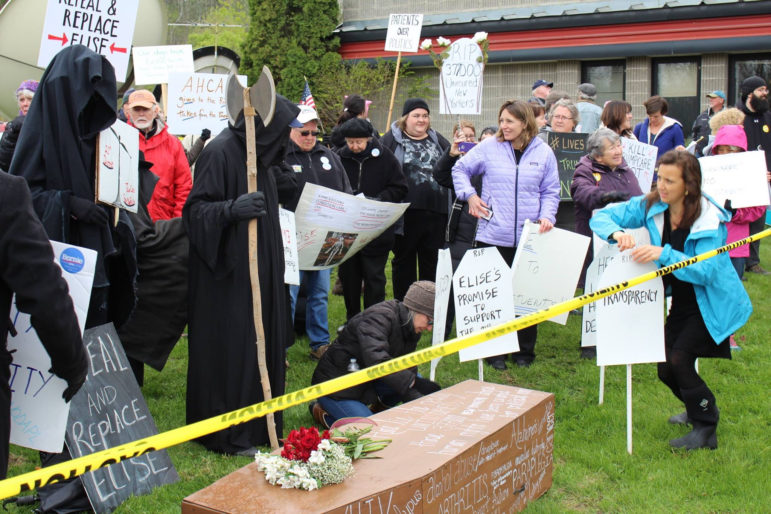 Protesters gather outside Mountain Lake PBS during its town hall May 8. Station representatives met with protesters ahead of the event to include their concerns in the production.

The public was “very concerned,” Kowalczyk said, that the station or Stefanik’s staff would pre-screen the audience or questions. So the station posted an FAQ explaining that audience members would each get a number, with numbers drawn during the broadcast to ensure random questions. The moderator would also ask questions from online viewers.

Meanwhile, Kowalczyk was also speaking with protesters. “They reached out to us,” she said. “They were planning a demonstration and asked where to stand.” The morning of the event, the group brought donuts for station staffers.

The station decided against another form of protest: signs in the studio. “We were concerned about those blocking the view,” Kowalczyk said. “A clever attendee put ‘green agree/red disagree’ signs on the chairs before the event started without asking us,” prompting a staffer to scurry through and gather them up.

However, without signs to hold up some attendees reacted “more audibly,” Kowalczyk said, making it necessary for the moderator to repeatedly request quiet. Next time, she said, “I think we may opt for the ‘agree/disagree’ signs.”

Afterwards, “people wanted transcripts pretty rapidly,” she said. “They were demanding fact-checking from local media.” The station opted to clean up the auto-captioning text from the YouTube video to meet those requests quickly.

Once planning began, “the congressman and his staff had their ideas on how they would like to see this happen, and we had ours,” Hughes said. “I believed we had to establish that it was our event, and we would set the ground rules and format.”

The audience couldn’t exceed 100 due to studio space. The station took requests online, asking for email addresses. The congressman’s office requested “full contact information for all attendees,” Hughes said, to run security checks. “We thought that through and pushed back and decided that first and last names would be sufficient” to check against security watch lists, he said. Attendees were not notified that the station shared their names.

Like at Mountain Lake, protesters contacted WPSU. The station looked into licensee Penn State’s rules regarding protests, Hughes said, and adapted those guidelines, such as barring merchandise sales and open flames at the protest. “We also came out and met with them an hour before the event,” he added. “They said they weren’t protesting our town hall, but the congressman’s reluctance to hold open forums.” 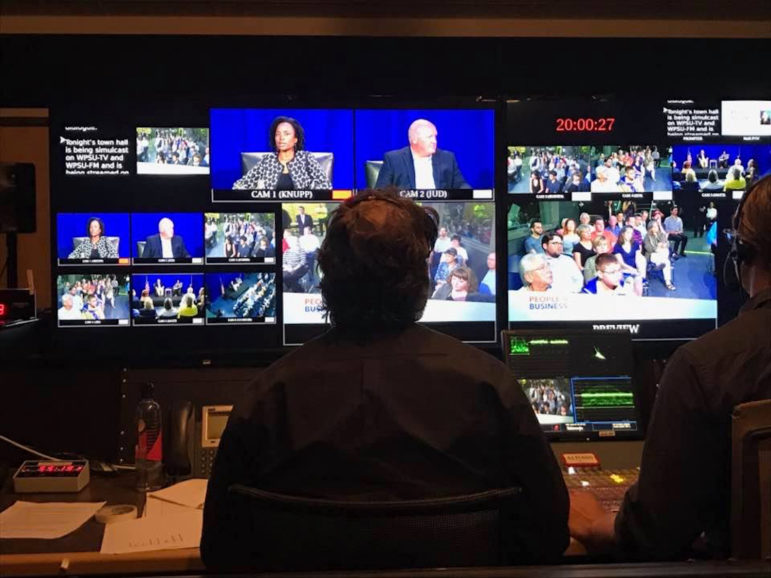 Audience members were asked to abide by a code of conduct that WPSU developed for the event. Participants could be removed for  actions such as “harassment including physical or verbal conduct and disruption of the program,” “refusal to release the microphone,” “profanity and vulgarity” or “any action WPSU or Congressman Thompson’s Chief of Staff deems threatening to anyone in the event space.”

Registrants could submit questions online. At the event, the audience was also given blank cards to “help collect their thoughts” to make live questions as concise as possible, Hughes said. They were asked to limit their one-minute questions to federal issues.

Overall, Hughes was pleased with the hourlong production. Looking back, he added, “I would have liked to have had the ground rules a little more firmly established before extending the invitation,” he said.

So WPSU now has a template for conducting town halls — which WLVT adapted for its Aug. 31 event.

“We reached out to Republican and Democratic members of Congress,” said WMHT President Robert Altman. Faso “was delighted to do it. He was newly elected in January.”

Faso’s staff had no input on the format, questions or audience selection, Altman said.

The station registered attendees online “on a first-come, first-served basis,” Altman said. “That was fair, but later a lot of people were upset because by the time they heard about it, there was no chance to attend.”

Audience members sat in numbered chairs. The moderator drew seat numbers for questions; a reporter in the studio from the local Times-Union also read queries submitted via Facebook.

“That worked well,” Altman said. “There weren’t a lot of duplicative questions. Some people wanted to make a statement; in the spirit of town halls, that’s within limits. But we didn’t want people making speeches.”

The senator’s staff had asked for names of participants, Altman said. “I don’t know for what reason,” he said. “We didn’t give them, and they didn’t push back. We just said that’s not appropriate.”

During the event, peaceful protesters demonstrated on the edge of the station’s property. Altman said posts on social media alerted WMHT that the protesters would be convening.

Altman said he was pleased with the hourlong live production, which ran 20 minutes longer on Facebook Live. He said the only change he would make in the future is, “I wouldn’t call it a town hall. Maybe a ‘community conversation.’ ‘Town hall’ has a specific feel to it — right now, that’s a loaded term.”