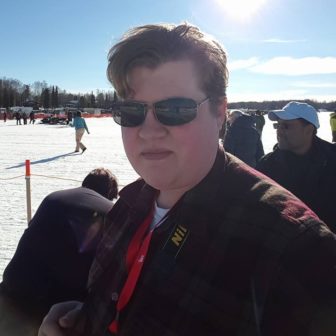 Manning at the 2016 Iditarod dogsled race.

In rural Alaska, public media is about community. It’s often the only source of local news, and it’s what people turn to in an emergency. I decided it would be my career after helping cover a significant flood.

In September of 2012, rain fell on the Susitna River Valley for the better part of a month, and the rivers crested their banks early one Friday morning. I worked at the small local airport at the time, not the radio station. I went into town to help however I could.

Initially I was recruited into spreading the word door-to-door about the freshly issued evacuation notice. Then I went back to where I lived on high, dry ground. I had previously reported a couple of stories for KTNA for extra money and because I wanted to try my hand at journalism as a stringer. The news director of KTNA called and asked if I would come to the station and help. I had to talk my way past law enforcement enforcing an evacuation order to make it to the studio, but there was suddenly no doubt in my mind of where I needed to be during the crisis.

Since I had a four-wheel-drive truck, I was put on field duty. The station’s newsroom is mostly a one-person operation, and the news director wanted someone to be able to see the disaster’s impact firsthand while he and the general manager handled the phones and gave live on-air updates. People who had evacuated had only us to tell them whether their homes were flooded and what they might come back to.

As the water receded, I drove as far as I could down roads that had been almost completely washed out. Everywhere I went, neighbors were helping each other clean up. Many had radios on, waiting for news from the local source they trust.

Talkeetna is a small town. Even though I was fairly new to the area, I had people approach me for months and tell me how important KTNA is to them. The ability and responsibility to be there for people with the facts, whether about a natural disaster or a municipal meeting, spoke to me after the flood. I’ve now been working full-time in public media for over four years.