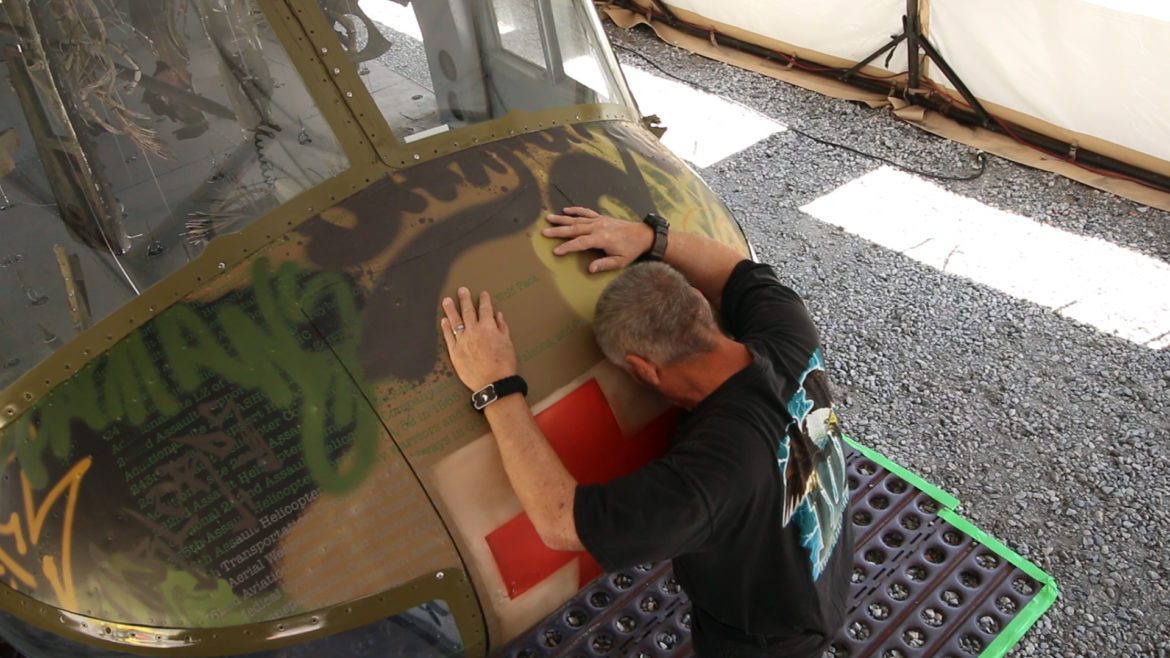 A Vietnam veteran reacts to Huey, the medevac helicopter that is the subject of a documentary presented by PBS SoCal.

With Ken Burns and Lynn Novick’s epic documentary The Vietnam War days away from its PBS premiere, stations across the country are brimming with local events and original content tied to the 18-hour series.

Reflecting the unique scope of the documentary — which moves far beyond a U.S. perspective to include voices from both North and South Vietnam — station outreach is unusually broad. It envelops Vietnamese communities as well as the Hmong, a Southeast Asian people whose clandestine contributions to the U.S. war effort were kept under wraps until the mid-1990s.

Millions of Americans lived the Vietnam War directly or recall it vividly. This particular documentary reflects a living culture that has, to a certain degree, been suppressed. The filmmakers’ decision to examine the Vietnam War from so many perspectives, including North Vietnamese and Viet Cong, distinguishes the series from earlier war films, noted Beth Hoppe, chief program executive at PBS.

Other PBS documentaries on the war have included Vietnamese voices, said Jon Miskowski, director of television at Wisconsin Public Television, pointing to Two Days in October, presented in 2005 by American Experience. “But nobody has heard those voices to this extent,” he said.

So public TV stations with large communities of Vietnamese and Hmong refugees — including Houston Public Media, PBS SoCal in Los Angeles and Twin Cities PBS — are hosting events and presenting documentaries that help to amplify their voices.

Following public TV’s well-established practice of pairing documentary series from Burns’s Florentine Films with content and events tailored to their communities, stations have been working for at least 18 months to engage U.S. and Vietnamese veterans and their families. They are presenting local takes on the Vietnam War, scheduling programs produced by other stations and sponsoring a variety of events — from screenings to town halls, exhibits, storytelling slams, lectures and panel talks. WGVU in Grand Rapids, Mich., is mounting a homecoming event modeled on Wisconsin Public TV’s LZ Lambeau event of 2010.

Because the series deals with events that were formative for millions of older Americans, and live on through the children of veterans, it is sure to trigger intense memories for viewers.

“It is Ken Burns, but it is Ken Burns amplified because it is so close,” said Lisa Shumate, executive VP and GM of Houston Public Media, which serves a city with one of the largest Vietnamese populations in the United States. “Many of us remember it, remember those images.” 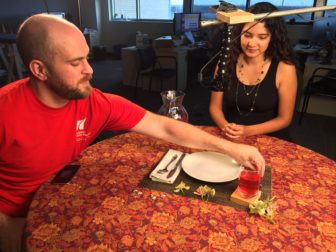 HPM has produced three half-hour documentaries and is offering them for broadcast by other stations. Saigon Stories follows Lily Jang, a former anchor for Houston’s CBS affiliate, as she travels to Saigon. Peace Meals records conversations between a U.S. Vietnam vet and a Vietnamese refugee, then between a second-generation immigrant and a child of a veteran, as each pair shares a meal; Getting Here recounts harrowing escapes of Vietnamese families who eventually settled in Houston.

Wisconsin Public TV, a pioneer in veteran’s outreach for the PBS system, has been collecting stories from Wisconsin vets for over a decade, and focused specifically on Vietnam veterans with “LZ Lambeau.” That welcome home event, which also featured Hmong veterans who were American allies during the war, has been a model for other stations in other states.

WGVU is unspooling a massive outdoor celebration, called “LZ Michigan,” on Sept. 23. “LZ” is shorthand for “landing zone” — the locations where soldiers were dropped into Vietnam by helicopter and, if all went well, eventually picked up.

“It is an important opportunity to engage with the community, especially since, in the series, one of the things they’ve done beautifully is [portray] the experience of Vietnamese soldiers and civilians,” said Sreedevi Sripathy, production project manager at WHYY. The Philadelphia station is hosting a Sept. 9 preview screening of The Vietnam War at the Asian Arts Initiative.

More than 58,000 Americans died in the military conflict. At least 250,000 South Vietnamese troops and over 1 million North Vietnamese soldiers and Viet Cong guerrilla fighters are believed to have died, according to the documentary. Two million civilians died in North and South Vietnam. In neighboring Laos and Cambodia, civilian casualties are estimated in the tens of thousands.

‘Great feelings about the Hmong’

The Vietnam War debuts Sept. 17 in a prime-time broadcast and digital streaming footprint designed to give viewers many opportunities to watch. The premiere run of the 10-part, 18-hour series preempts PBS’s regular prime time schedule from Sunday to Thursday at 8 p.m. Eastern time for two weeks. Each episode will be immediately rebroadcast on the night of its premiere.

Then, starting Oct. 3, each of the 10 episodes will repeat on Tuesday nights at 9 p.m. Eastern time through November 28. To accommodate the weekly repeats, Frontline moves to Wednesday nights after Nova.

“It is going to start a national conversation,” Hoppe said. In a first, PBS.org will offer a Vietnamese-language version of series for streaming.

Most episodes are two hours long, but four run 90 minutes, providing a half-hour window for stations to air original programs. Houston Public Media, for example, is slotting its three documentaries on three of those four nights.

The stories of this group of refugees haven’t been deeply explored before. The Hmong saved the lives of many Americans, but the CIA never publicly acknowledged their role until 1994. American Public Television is distributing the TPT film nationally as America’s Secret War, said Katie Carpenter, project lead for the initiative.

Twin Cities PBS serves the largest concentration of Hmong in the U.S. In the film, Hmong soldiers and their families describe hardships they experienced during and after the war, when they were hunted by the newly dominant communist government.

State Senator Foung Hawj, who is Hmong, represents Minnesota’s 67th District. He recalls growing up next to a clandestine airstrip in Laos where the CIA launched secret missions to help U.S. soldiers. His family fled to the U.S. when he was 10.

“Our community just wants our story to be told,” he said in an interview with Current. “Almost every single Hmong person [in the U.S.] has direct relations who fought on behalf of the United States in the war.”

Wisconsin Public Television also serves a state with a large Hmong community, according to Miskowski, and invited Hmong veterans to speak at LZ Lambeau. “A lot of American Vietnam vets had such great feelings about the Hmong,” he said. “They served with them. One may have rescued one of their buddies.”

LZ Lambeau has become a model for similar events that reunite U.S. veterans and former Vietnamese and Hmong soldiers, who rarely crossed paths after the war ended. U.S. vets rarely talked about their service, even with each other.

“Vietnam was not the Civil War, but it had elements of brother against brother and sister against sister that clearly linger today,” said WPT’s Miskowski. “Veterans came back and put it away. You didn’t put it on your resume. You didn’t march in a parade.”

Anticipating an intense audience response, PBS SoCal is planning an event to channel stories and reactions triggered by the documentary’s debut run. The Los Angeles station will host a storytelling evening Oct. 6 featuring clips from the series and a mixed-media exhibit on “Huey,” the nickname of a helicopter that served as an air ambulance during the war.

The copter is the star of an original documentary, Take Me Home Huey, that will air locally. PBS SoCal is presenting it for broadcast on other stations through the National Educational Telecommunications Association.

California’s Orange County, where PBS SoCal is headquartered, is home to a large Vietnamese population. The station hosted an event in May at the University of California, Irvine, home of the Southeast Asian Archive and Viet Stories: The Vietnamese American Oral History Project. Burns and Novick joined a panel moderated by project archivist Thuy Vo Dang. Duong Van Mai Elliott, a narrator in The Vietnam War and author of The Sacred Willow: Four Generations in the Life of a Vietnamese Family, also participated.

“It was the first time the [Vietnamese] content locally had been brought out in public,” said Jamie Annunzio Myers, COO and VP of education and community engagement at PBS SoCal.

Burns and Novick emphasized their goal to provide as many angles on this war as possible to highlight the many truths that can exist simultaneously. Panelists at the event also wanted the series to engage postwar generations, an idea that has been a recurring theme at events across the country.

While PBS and stations expect big audiences and a blitz of coverage for the debut of any major series by Burns and Novick, station execs said they couldn’t predict how viewers will respond to a war film that looks at the conflict from so many perspectives.

“If it were 20 years ago, I think it would be really difficult for Americans to hear the North Vietnamese voices,” said WPT’s Miskowski.

But today it’s less likely to be so controversial, said Bob Culkeen, GM of WSRE in Pensacola, Fla., a military town known for its historic Naval Air Station.

“When we start hearing from the audience after the broadcast, then we will be able to gauge what they thought about it,” added WHYY’s Sripathy.

Events scheduled after the premiere, such as PBS SoCal’s storytelling evening and a Sept. 29 town hall organized by HPM, will give local viewers opportunities to discuss the series in all its intensity.

Due to last week’s historic flood in Houston, plans for HPM’s town hall are now “up in the air,” said EP Don Geraci. The public broadcaster lent its studios to local CBS affiliate KHOU after water engulfed its own facilities.

Older generations of the U.S. Vietnamese community are likely to balk at a perceived sympathetic portrayal of the North, said Jimmy Nguyen, marketing director for the VIETV Network, a Vietnamese-language broadcaster with affiliates in six markets.

Burns and Novick describe corrupt, ineffectual governments in South Vietnam and the allure of North Vietnamese leader Ho Chi Minh. So while Nguyen’s network has picked up Houston Public Media’s three local documentaries, he said, it’s not rushing to feature the main attraction.

“I know the sentiment of the community,” Nguyen said. “The Vietnam War is very controversial.” Not all Vietnamese viewers will react negatively to the series, he said, but the older generation of refugees and veterans will, “and we have to respect them.”

HPM’s Shumate thinks the documentary’s evenhandedness, pedigree and clear sympathy for all those who fought will keep controversy to a minimum.

“There is such a great deal of truth in Ken Burns’s storytelling and his way of covering history and treasuring our national memory, that people come to it with more of an open mind,” she said.