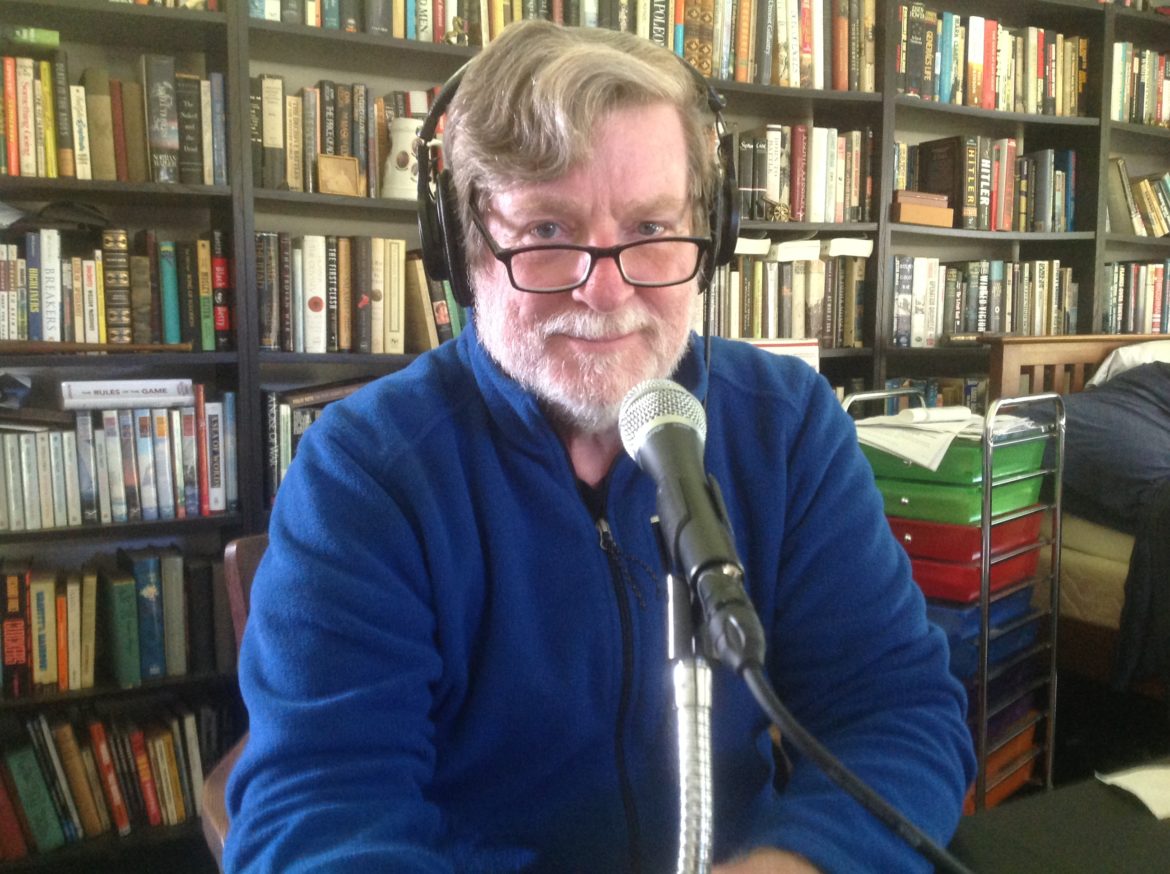 Conan interviews guests for "Truth, Politics and Power" from his home studio.

Neal Conan had been content with his life in semiretirement at his home on Kohala Mountain in Hawaii.

The former NPR host and correspondent spent his time producing a series of news analysis briefs for Hawaii Public Radio and growing macadamia nuts on 5½ acres of land. But when Donald Trump ascended to the White House and an HPR listener offered to fund a radio project, Conan decided to return to the national airwaves. He teamed up with three other NPR alumnae to produce Truth, Politics and Power, a weekly, hourlong interview program.

“I needed to do something to address the moment that we’re in because I think it’s an absolutely critical time for the country,” Conan said. “I don’t want to seem too pompous about it, but I really felt that it might be helpful to explain what’s going on.”

Describing the Trump administration as having “a limited and to some degree warped view of history,” Conan said, Truth, Politics and Power aims to put current political developments in historical context.

He’s collaborating with former NPR colleagues Sue Goodwin, John Ogulnik and Argin Hutchins, all of whom are in Washington, D.C. — and six time zones away.

Each weekly program typically features three interviews. Unlike Talk of the Nation, which Conan hosted on NPR for more than two decades, Truth, Politics and Power does not take listener calls. Instead he calls on political science professors such as Ron Hayduk and Julia Azari, as in the most recent episode, to tackle the history of voter fraud and where allegations from the 2016 presidential election could lead. Political analyst Linda Chavez, also a guest on the show, delivered a scathing assessment of the president’s obsession with illegal immigrants.

The July 28 episode focused on impeachment. Conan interviewed political scientist Greg Weiner, who explained the clause in the U.S. Constitution that gives Congress the power to impeach a president; he went on to describe the legislative body’s timidity to use it. He talked to Nina Totenberg, NPR legal affairs correspondent, with whom Conan covered the impeachment of President Bill Clinton nearly 20 years ago.

Their recollection of the events leading up to Clinton’s impeachment and the political machinations surrounding it demonstrated a masterly recall of one of modern political history’s more salacious chapters. Conan also interviewed author and constitutional lawyer David O. Stewart, who wrote a book about the impeachment of President Andrew Johnson in the 19th century.

Conan has been in radio journalism for 50 years, starting as a 17-year-old student volunteer at Pacifica’s WBAI-FM in New York. He worked briefly at WRVR-FM, where he met the commercial jazz station’s evening news anchor Robert Siegel. Conan, then 27, followed Siegel to NPR, where he initially produced All Things Considered. During his 36 years at the news organization, Conan covered the White House, Pentagon and State Department; he served as London correspondent and covered the first Gulf War, where he was captured and briefly held by Iraqi forces. 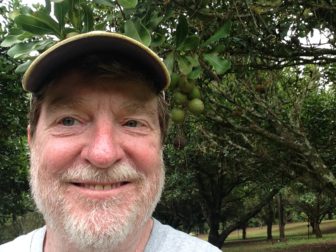 Conan in his grove of 175 macadamia nut trees on Kohala Mountain.

Conan departed in 2013 after NPR ended Talk of the Nation and replaced it with Here & Now. He was offered a job as “elder statesman” on the midday show, a co-production with WBUR in Boston, but declined it.

Instead he put down roots on an extinct volcano on the Big Island of Hawaii. Conan tended his 175 macadamia nut trees and produced Pacific News Minute, providing news analysis on military and political developments in the Pacific Basin. It airs on HPR three times a week.

After the election, an HPR listener who lives nearby approached Conan with an idea for a radio documentary that he wanted to fund. Conan suggested the interview show instead. Conan describes James Posner as a man with a “philosophical commitment to learning about the truth.”

Since Truth, Politics and Power launched in March with startup funding from Posner, listeners have sent in thousands of dollars, according to Conan.

‘We know each other so well’

The team behind Truth, Politics and Power is much smaller than TOTN at its peak. Conan said he’s not sure he could do it without Goodwin as his executive producer. The two had worked together for 12 years at TOTN, where Goodwin served as senior supervising producer and then executive producer.

“He’s a remarkable journalist and a remarkable mind,” says Goodwin, whose 20-plus years at NPR include stints at Tell Me More and the NPR science desk.

“We know each other so well, and we trust each other editorially and in every way — and that is worth a lot,” Goodwin says. “Between Neal and I, we can remember almost every guest he talked to in the last 10 years or so.”

When she invites one of those guests to appear on Truth, Politics and Power, Goodwin sends a link to the earlier interview and always gets a “Yes,” she says. “And for a booker, that means a lot.”

Goodwin shares booking duties with Ogulnik , who also edits the show. Ogulnik started his career at NPR in 1980 as a production assistant cutting Bob Edwards’ two-ways and went on to serve as a sports producer and later as a producer of NPR live events.

“When Neal does an interview, he’s really well-prepared, and [the guests] know it and appreciate that,” said Ogulnik. “He’s one of the best.”

With a six-hour time difference between the show team and the host, collaborating from such a distance is a challenge — for Ogulnik, anyway.

“I like the face-to-face contact,” he said. “I think it’s a better way to work. When you’re in an office, you overhear things, you see things. But when you don’t see each other it’s definitely a little harder.”

Conan also misses being able to stop by a colleague’s office and brainstorm an idea, but Goodwin says she finds that working online can be more efficient. The team uses Google Docs and Freedcamp, a project management website, to share documents. Conan, who describes himself as a “Luddite,” prefers email and concedes he could be more cooperative with using digital tools designed for collaboration.

“When Neal does an interview, he’s really well-prepared, and [the guests] know it and appreciate that. He’s one of the best.”

The production team can pull a show together in one day if it has to, but generally take up to four days to book guests and arrange for tape syncs to record them. Goodwin says they like to produce programs that are going to be relevant for at least a month.

Conan has had to get up in the middle of the night to do interviews, especially for guests in Europe. Asked how he does it, he replies, “When I wake up, I’m still in Hawaii.”

In addition to the challenge of working across so many time zones, production is sometimes affected by Conan’s intermittent internet connection. In the rural area where Conan lives, the only way of connecting to the web is via satellite. Sometimes the mountain winds knock out his internet access.

Heading into the Public Radio Program Directors conference in Washington, D.C., this week, the Truth, Politics and Power team is hoping to pick up carriage commitments from more stations. With the Best of Car Talk ending production Sept. 30, PDs are rethinking their weekend lineups. Truth, Politics and Power has a distinct advantage, Conan believes, because it’s very different from the light, entertaining fare that dominates much of public radio’s weekend programming.

“I think that in times like these people are looking for more serious material,” Conan said.