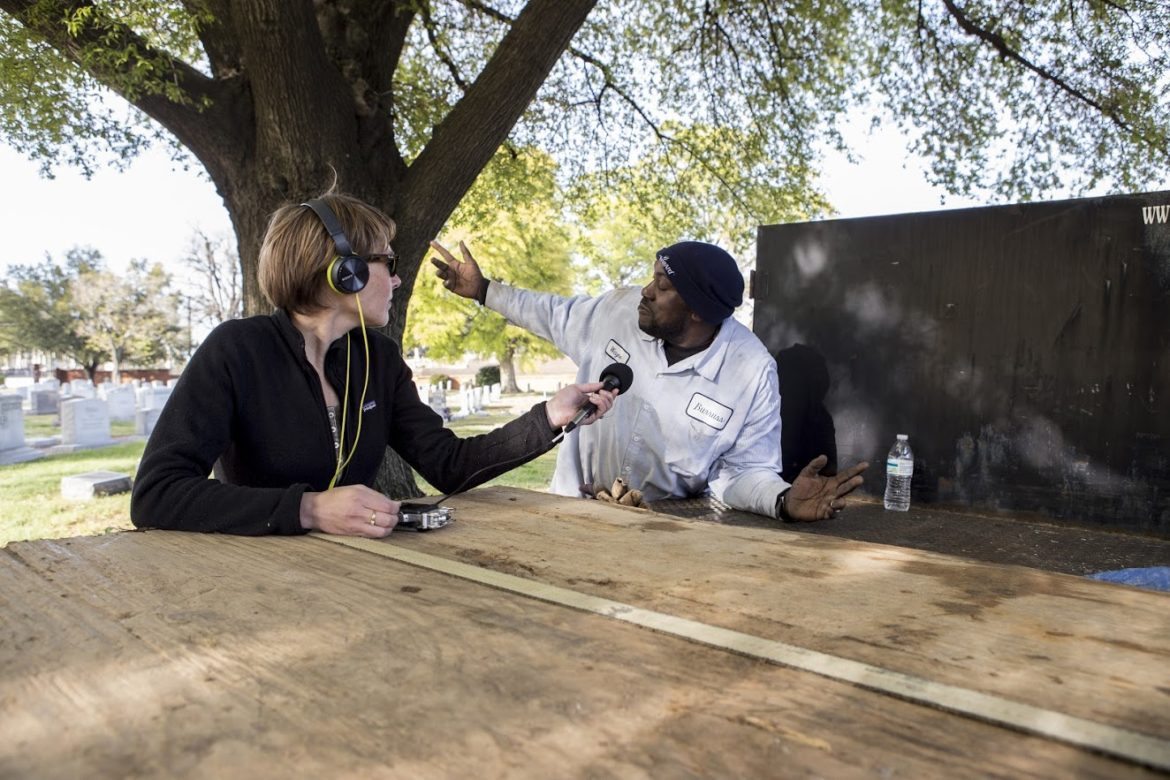 RICHMOND — Independent producer Kelley Libby spent nine months giving life to untold stories here in the former capital of the Confederacy. As she interviewed residents, something stuck out.

“There was an interest in learning how to do what I do,” Libby said. “People wanted to be able to tell their own stories.”

Richmond is known for its imposing monuments celebrating the Confederacy, creating a narrative that Libby’s interviewees wanted to reclaim. Now a mix of timing and connections has led Libby to encourage even more Richmond residents to address that need. 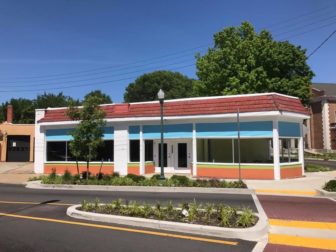 The exterior of the new Six Points Innovation Center where Storefront Studio operates.

Along with leaders of several community organizations, Libby celebrates the grand opening Tuesday of the Six Points Innovation Center, a space in a low-income Richmond neighborhood aimed at engaging local youth in creative disciplines. One area will be set aside for Storefront Studio, a facility where Libby and co-creator Free Egunfemi will train youth in audio production and storytelling.

Storefront grew out of Libby’s experience working on Localore, the CPB-funded project spearheaded by the Association of Independents in Radio. From November 2015 to July 2016, the project embedded independent producers at public media stations to extend their reach to diverse audiences and encourage new storytelling models. Libby’s project, UnMonumental, focused on how Richmond remembers its past through the voices of its residents.

The project focused on community-driven stories and engaged residents through unconventional methods such as public art projects. An event staged in a historically black neighborhood showed that people could bridge divisions and have a good time doing it. Localore taught Libby that she could engage the community in a deeper way.

“I think we need to have an awareness that there are … more productive ways to get the story when we are not extracting value, but rather bringing value to the relationship and to your community,” Libby said.

“Our work this year together is to figure out a way to commodify the act of people telling their own stories as an income-generating model.” — Free Egunfemi

Richmond is supportive of entrepreneurs and full of cultural history. By training youth to tell community stories, Libby and Egunfemi want to create a path for their students to benefit economically from their efforts and stay in Richmond to start careers.

“Had I just been a journalist working for a station, just reporting on the issues, I don’t think I would have been thinking about a deeper, better way for all of us,” Libby said.

Leadership of Storefront pegged Libby and Egunfemi, a local historian who has studied Richmond’s role in the slave trade, to develop Storefront Studio. 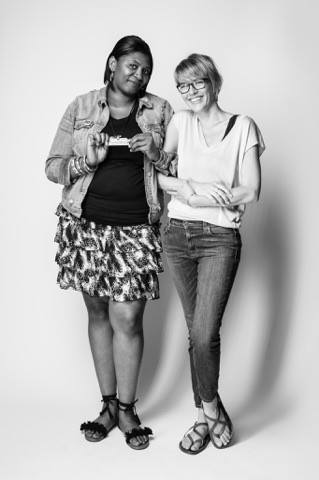 Libby and Egunfemi began a close friendship in 2015, as they discussed Libby’s plans for her Localore project. “From the beginning, it was a connection you could actually feel; the things that we were talking about, the potential,” Egunfemi said recently over lunch with Libby.

Libby used some of her Localore funding to support Egunfemi’s public art projects and reported on the historian’s public tours and community events that focus on Richmond’s lesser-known past. Egunfemi provided Libby with advice, a network of contacts, and a wealth of local and historical knowledge.

Sitting on a restaurant’s patio and sharing corn-on-the-cob and tacos, Libby turned to Egunfemi and said, “I was trying to figure out a model for how to reach people, but ultimately, you were that person.”

“That’s control of a narrative if there ever was one,” Libby said. UnMonumental’s logo depicts the base of a fallen monument.

Libby didn’t ask her interviewees to talk about race, inequality or the area’s history of slavery and discrimination, but they did anyway. She said she asked people about the changes going on in their lives. “And because this is Richmond, you can’t divorce people’s experiences from that history,” Libby said. “That history is the context to our lives here.”

By leading Storefront Studio, the duo will build on their work together, such as developing a public art and history project similar to one they created during Localore. They want to place markers with phone numbers around public art. Passersby can call the numbers and hear local notables telling Richmond’s history.

The Ovation grant covers mobile recording kits and more. Libby and Egunfemi will begin by teaching audio production skills to 6PIC staff and, eventually, Richmond high-school students. They also plan to invite professional journalists and historians to the space. Storefront Studio aims to produce 30 pieces of content per quarter, Libby said. It’s yet to be determined how and where the content will be shared and consumed.

The grant requires recipients to invest in the creative economy, defined as a “segment of the larger economy that applies creative ideas and processes to generate goods, services and innovations that provide economic and aesthetic value for all.” 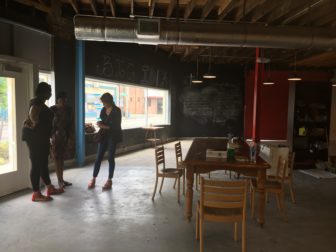 Just inside the front door of Six Points Innovation Center in Richmond, Va.

Richmond’s Highland Park neighborhood, where 6PIC is located, is full of stories for students to bring to light. Known for its large Victorian homes, Highland Park was a white neighborhood before World War II. After the war, whites fled the area and blacks moved in. Long neglected, it’s slowly gentrifying.

High-school students worked with architects to help design the 4,000-square-foot 6PIC — once an auto shop, then a clothing thrift store — that will provide after-school programming for young people ages 13–22. A youth-led Changemakers Council will choose community issues to focus on. Its facade lined with windows, 6PIC is a bright space with a freshly painted mural.

“We saw that void,” Rinn said. “We think that the creativity and the skills that they’re going to bring into this space are going to allow it to blossom into whatever they want it to be.”

‘Be where people are’

Before starting her Localore project, Libby was a producer for With Good Reason, a statewide talk show produced by the Virginia Foundation for the Humanities. Most of her work kept her in an office, which she found limiting.

“If you are going to be telling community stories, if you are trying to build a public media that reaches people, you have to be where the people are,” Libby said.

Taking part in Localore taught Libby how the Public Broadcasting Act was established to focus on education and respond to community needs, she said. She now thinks that public media journalism could be more effective in pursuing that mission.

Through her work with Localore and in her new role with Storefront Studio, Libby finds herself flirting with an advocacy role that might give other journalists pause. But Egunfemi encourages Libby to do what feels most natural to her.

“I feel as a journalist, you’re trained to not tell stories about people you know. But I don’t know the stories until I know the people.” — Kelley Libby

“You’re being supported and funded by people that want to see innovation in public media,” Egunfemi said.

Had Libby been engaged in more traditional reporting, she may not have developed such a close relationship with an activist and historian like Egunfemi. Perhaps Storefront for Community Design wouldn’t have chosen them to lead Storefront Studio.

“Without Localore, I wouldn’t be doing this, and this is exactly what I want to be doing,” Libby said.

Ultimately, Libby says engagement with the community has strengthened her journalism.

“I feel as a journalist, you’re trained to not tell stories about people you know,” Libby said. “But I don’t know the stories until I know the people.”