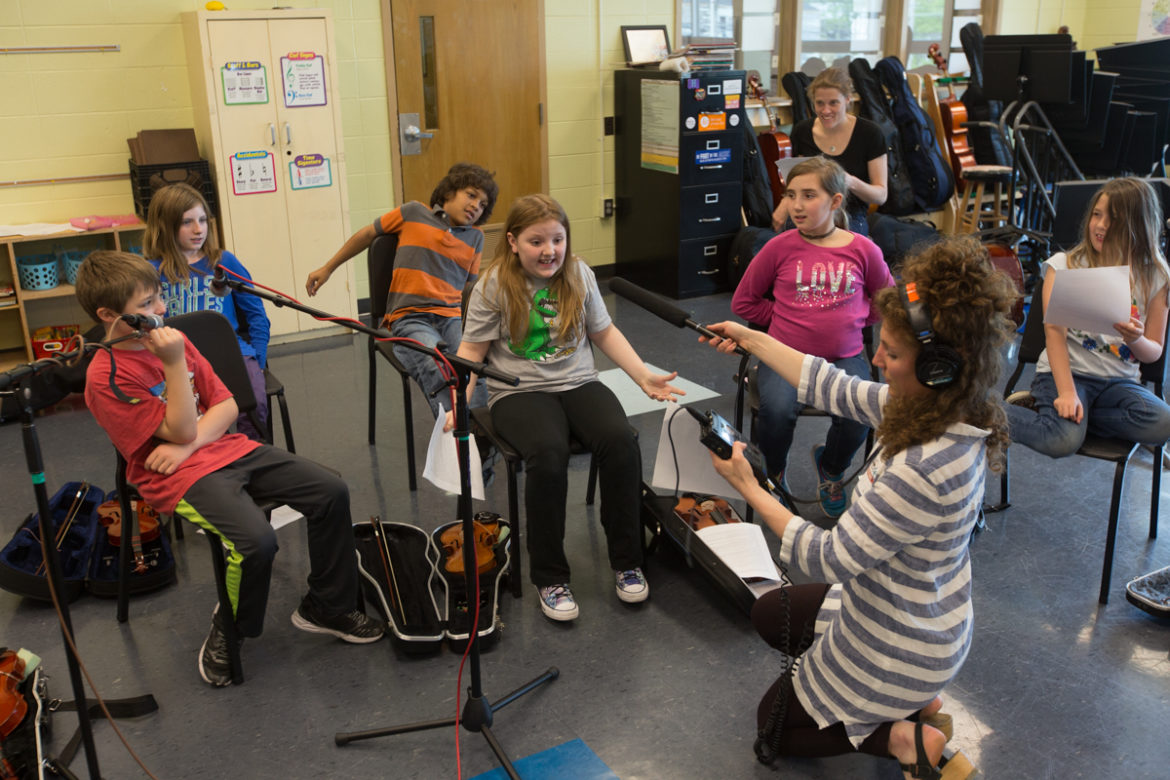 This article is the first in Local That Works, an initiative highlighting innovative and replicable content, engagement and revenue strategies of local public media and nonprofit news organizations. Current is collaborating with Public Media Futures Forums to cover projects nominated for the initiative, which culminates this fall with the inaugural Local That Works Award. To nominate your projects for consideration, complete our online questionnaire by July 14.

Louisville Public Media’s classical station WUOL is preparing to launch a new podcast as an extension of Summer Listening, a one-of-a-kind educational program that encourages families to listen to classical music together.

Since its start in 2013, Summer Listening has built on WUOL’s initiatives to support music education in schools. In addition to Instrumental Partners, which collects donations of used instruments and gives them to local students, the station sends Sara Soltau, a music educator with a background in radio, into schools during the school year.

The new slate of Summer Listening events launches July 13 with a program featuring the work of African-American composer Florence Price, musicians from the Louisville Orchestra and singers from Black Classical Artists of Louisville. A classical music picnic with kite-making activities and a screening of the BBC production of the children’s opera The Little Prince are also planned.

To reach a broader audience and support musical collaborations with students, Soltau’s forthcoming podcast The Music Box will release at the start of the event series. As with other music education programs, the podcast’s goal is “to invite and inspire kids to listen to and engage with classical music, making it relevant to their everyday lives,” said Soltau.

Soltau is also creating a music curriculum that runs parallel to The Music Box. It will be accessible on the station’s website, along with audio streams of each show. She seeks to reach “pre-K through elementary school classrooms, families and the forever curious.”

When school is in session, Soltau brings her own special brand of music education to local classrooms through a program called “Sharing Stories.” With a violin and recording equipment, she plays for, and sometimes with, children. In 2016 she performed her one-woman show Ferdinand the Bull for more than 2,000 students.

WUOL Program Director Daniel Gilliam decided to create Summer Listening, an idea based on popular summer reading programs, for those hot weeks of summer when families are looking for enriching activities; Soltau has greatly expanded the program since coming on board in 2015. By mounting events outside of schools and classrooms, WUOL set out to reach a broader audience and support other arts activities “already going on” in the region, Soltau said.

WUOL in the community

Long before Soltau arrived at WUOL, the station’s outreach to local schools centered on Instrumental Partners, which has placed over 1,000 instruments in schools since its inception in 2003. As a result of the program, Jefferson County Public Schools fulfilled the instrument needs of every student for the 2016–17 and 2017–18 school years. According to the station, the estimated value of more than 200 instruments approaches $70,000. 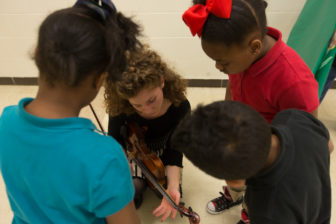 Soltau shows students how to play a violin.

Through all of these youth music programs, WUOL effectively engages with children of different backgrounds — including those from low-income families that don’t listen to public radio. “It’s very easy to get big numbers and big success rates when you’re working in schools that are used to creative education and family education,” Soltau said. Connecting with “kids who haven’t been exposed to that kind of education” is the most challenging part of her work.

However, her ability to network within Louisville’s education and classical music communities has helped Soltau expose more children to the music and programming that WUOL offers. Soltau sees her work as a collaborative with parents and teachers, and she often hears feedback about how kids respond after teachers connect her performances to other lessons. “Kids really remember when someone comes into the school,” Soltau said.

Teachers who have worked with Soltau praise her approach and commitment.

“Her performances are a wonderful way to tie literature and music together while giving my students an opportunity to hear a violin,” said Toska Adams, a visual and performing arts teacher at Laukhuf Elementary in Louisville. On her last visit to the school, Soltau played for children in kindergarten, and first and second grade classrooms, and it was a unique experience for them. “Very few of my students have the opportunity to experience classical music until they are in the fourth and fifth grade and go to the Louisville Orchestra,” Adams said.

Soltau created a study guide to support her Ferdinand the Bull show, said Myra Kean of Pleasant Grove Elementary. With cross-curricular sections on music, art, reading, careers and Spain, the guide helps teachers prepare their students in advance of a performance. “She truly cares about the education of our young students and has continued to help our music program grow,” Kean said.

Keeping the mics on

WUOL’s education program attracts support from corporate and private donors, according to Gilliam. Instrumental Partners is sponsored by PNC Bank, for example, and previously received funding from the Robert and Clarita Whitney Fund. “We’ve also received private donations from major donors to support Summer Listening and other education work,” he said.

By Soltau’s count, WUOL has raised about $115,000 to support its music education programs, beyond the grant that funds her position. “From my point of view, the main financial challenge seems to be supporting my salary and supporting salaries … to hire more staff for the growing program,” she said.

With the recent expansion of Summer Listening, WUOL is budgeting about $4,000 for the events, up from $1,000, according to Soltau.

There’s no direct way to connect Summer Listening or other initiatives to audience gains, Gillam said, noting that the outreach “certainly hasn’t hurt.” But the station’s weekly cume has grown about 10 percent since Summer Listening’s first season — from an annual average of 30,000 in 2013 to 33,000 in 2016 — he said.

Signups for the Summer Listening program, which includes a seasonal weekly newsletter providing information and activities about classical music, has grown from 20 subscribers in the inaugural year to 680 last summer. Attendance at one annual event  — a film screening of a children’s opera — also increased from 80 attendees to more than 300 from 2015 to 2016. WUOL’s decision to participate in a citywide “Cultural Pass” program helped to boost participation, Soltau said.

Unabashedly optimistic about her job, Soltau sees Summer Listening as a model for other stations to support education for kids and families. “Public radio is a wonderful platform for this kind of work, and I hope to see it continue and grow in Louisville and around the country,” she said.