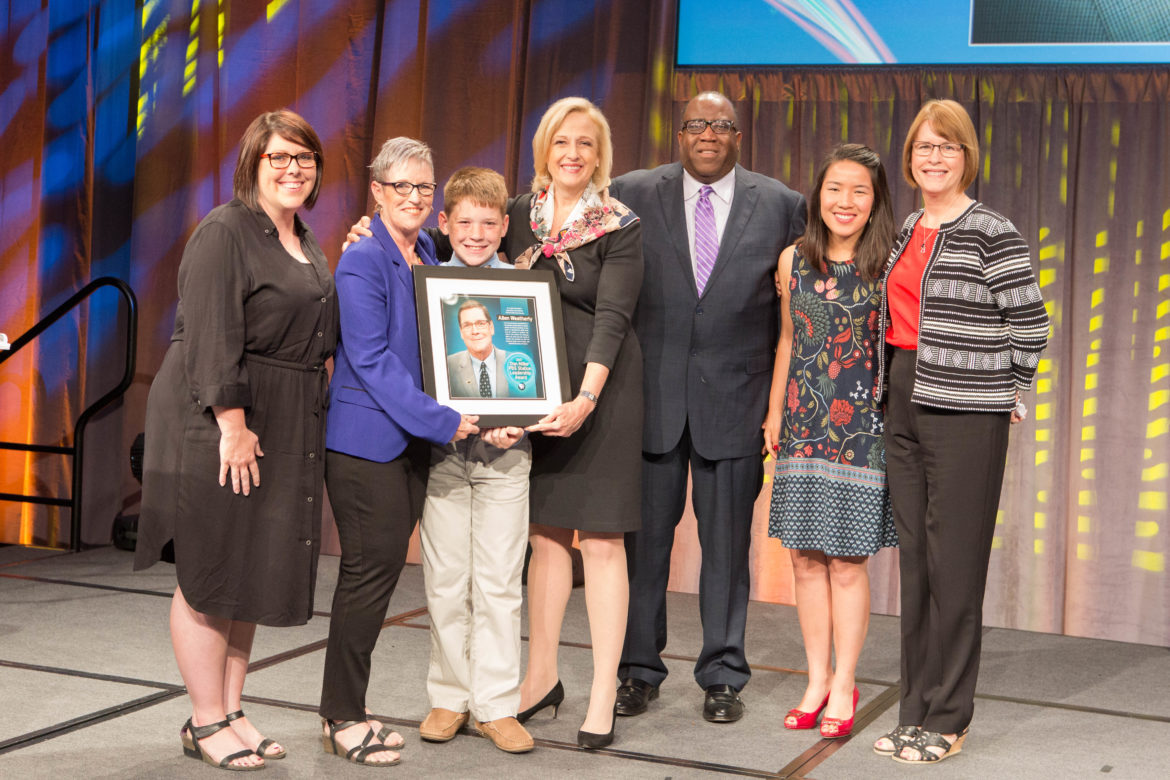 The award is named for the former executive director of Iowa Public Television. PBS President Paula Kerger told the crowd at the PBS Annual Meeting that she presented the inaugural award to Miller himself last year with the promise that it “will forever bear his name.” Miller led Iowa PTV as GM and executive director for 11 years, retiring in 2013 after a 37-year career.

With Miller unable to attend the Annual Meeting, Kerger invited his family to the stage to describe his commitment to public broadcasting.

“He truly believes in the mission and importance of free and independent public media,” said his wife, Diane Graham, who said she was a former newspaper editor and a fan of Masterpiece.

Maya Miller, his daughter, recalled growing up on PBS Kids programming and said she was “thoroughly steeped in PBS culture.” Speaking of her father’s wit and spirit, she recalled an exchange at one of his recent medical appointments. In a test of Miller’s memory, his doctor asked, “What country do you live in?” Miller replied, “Donald Trump’s America.”

“Thank you for annually honoring my father’s contributions,” she said. 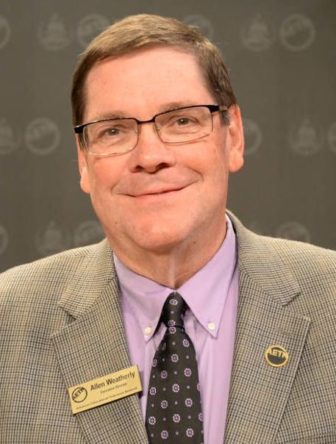 Kerger stepped back to the podium and, voice choked with emotion, named Weatherly, who died last fall while awaiting heart surgery, as this year’s recipient.

“He was a leader in every sense of the word,” Kerger said. “He believed in the power of public media and was inspiring to us. He worked to ensure that education was our focus, and he was one of the kindest, most generous people I have ever met.”

Ronnie Agnew, executive director of Mississippi Public Broadcasting, spoke next. “This is extremely tough for me,” he said. “Allen was my friend. … He gave himself to everyone who needed help. He had a great smile, and he made everybody feel better about himself or herself.”

“After his family, public broadcasting was his life for 40 years,” Agnew said. “We will always love you, Allen, and always honor you by giving our best.”

Peggy Weatherly, the honoree’s wife of 40 years, accepted the award on his behalf. “Allen loved God, his family and PBS,” she said. “What he wanted out of life was to make a difference, and I think he did.” 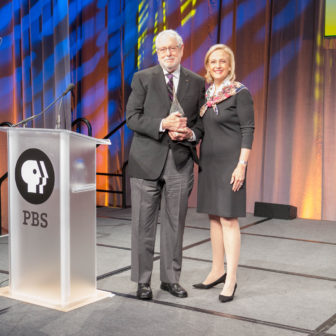 Also at the Annual Meeting, Earl Blauner, special counsel for gift planning and endowment at KQED in San Francisco, received the 2017 C. Scott Elliott Development Professional of the Year Award. The award was established in 1990 in memory of Elliott, who raised more than $100 million for PBS member stations in Detroit, Cincinnati and Buffalo, N.Y., throughout his career.

KQED’s endowment has grown from $2 million to $67 million through Blauner’s efforts, Kerger said. She credited him for cultivating planned gifts from 500 members of the Jonathan C. Rice Legacy Society, which is named for a KQED co-founder who initiated the station’s planned giving program.

as individuals building relationships — and keep our commitment to it in face of the pressures to meet our annual fundraising needs,” Blauner said.

“I urge on those of you who haven’t fully committed to this work,” Blauner said. “Our viewers care mightily, and we should continue working with them to secure important, and sometimes transformational, gifts to our stations.” — Karen Everhart and April Simpson 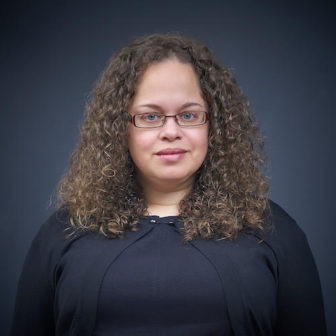 Phyllis Fletcher, managing editor of the Northwest News Network, is the inaugural winner of the Editor of the Year award from Public Radio News Directors Inc. The honor recognizes “an individual who exemplifies the very best in story editing and newsroom leadership,” according to PRNDI, which is celebrating 2017 as the “Year of the Editor.”

“Phyllis Fletcher is one of the finest editors working in public media today,” PRNDI President Terry Gildea said in the announcement. “Her positive influence on the many reporters she has worked with is evident in the work they have produced. She continues to be a vital mentor to people she works with. PRNDI is excited to honor her with our first annual Editor of the Year Award.”

Fletcher oversees and edits reporters for Northwest News Network, a collaboration of public radio stations in Washington, Oregon and Idaho. She also identifies opportunities for collaborative news projects among partner stations and facilitates content-sharing among stations and newsrooms, according to PRNDI. Her reporters describe her as “an innovator, adventurous storyteller, deft reporter and a deeply-involved editor.”

“The most touching thing about this is to learn that reporters I’ve edited feel there’s something special about what we’ve done together,” Fletcher told PRNDI. “I admire them so much.”

Fletcher is also interim president of the Seattle Association of Black Journalists, an editor with the mentorship program Next Generation Journalists and a former editor and reporter with KUOW in her native Seattle. She will receive the award at PRNDI’s annual conference in June in Miami.

The National Friends of Public Broadcasting presented Kathleen Rae, a lay delegate with KPBS in San Diego, with its 2017 Grassroots Advocacy Award at the PBS Annual Meeting. The honor recognizes a public media volunteer or volunteer coordinator who demonstrates outstanding leadership skills in organizing, engaging in or enhancing a grassroots station advocacy program that furthers public media’s legislative goals and marshals support.

Rae is the former director of government affairs and director of educational technology for Thirteen/WNET in New York City. From 1984 to 1991, she served as WNET’s director of New Jersey operations and was instrumental in the development of several major prime-time programs, including William J. Brennan, Justice for All, a recipient of the American Bar Association’s Silver Gavel Award, according to a statement from NFPB.

“Kathy Rae has been a long-time advocate for the entire public media system,” Dorothy Pacella, NFPB chair, said in a statement. “She has been an outspoken advocate first for WNET New York Public Media for more than 25 years and most recently as a volunteer for KPBS in San Diego for the last four years. No one is more deserving of this year’s NFPB Grassroots Advocacy Award than Kathy.” 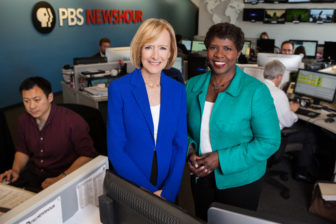 Judy Woodruff and the late Gwen Ifill will receive the 2017 Walter Cronkite Award for Excellence in Journalism at a luncheon ceremony Oct. 19 at the Sheraton Grand Phoenix Hotel in Phoenix. Woodruff will accept Ifill’s award on her behalf. Ifill served as co-anchor and co-managing editor of PBS NewsHour from 2013 until her death from cancer in November 2016. The duo is credited with breaking new ground in journalism as co-anchors and managing editors of the NewsHour.

The award is given by the Walter Cronkite School of Journalism and Mass Communication every fall.

Woodruff is also the 2017 recipient of Poynter’s Medal for Lifetime Achievement in Journalism, recognizing an outstanding journalism career that has “made a lasting impact serving citizens in our democracy,” according to Poynter.

Tim Franklin, Poynter’s president, called Woodruff “one of the great broadcast journalists of this generation” in a statement Thursday.

“Judy is an award-winning journalist who blazed a trail for other women, covering national politics and the White House for NBC News in the 1970s and 1980s,” Franklin said. “She’s done it all, covering huge stories, moderating presidential debates, hosting a daily program on CNN and anchoring the ‘NewsHour’ with distinction.”

Woodruff will be honored at an event in St. Petersburg, Fla., Nov. 4.

One thought on “PBS honors station leaders, PRNDI names Editor of the Year, and more awards in public media”