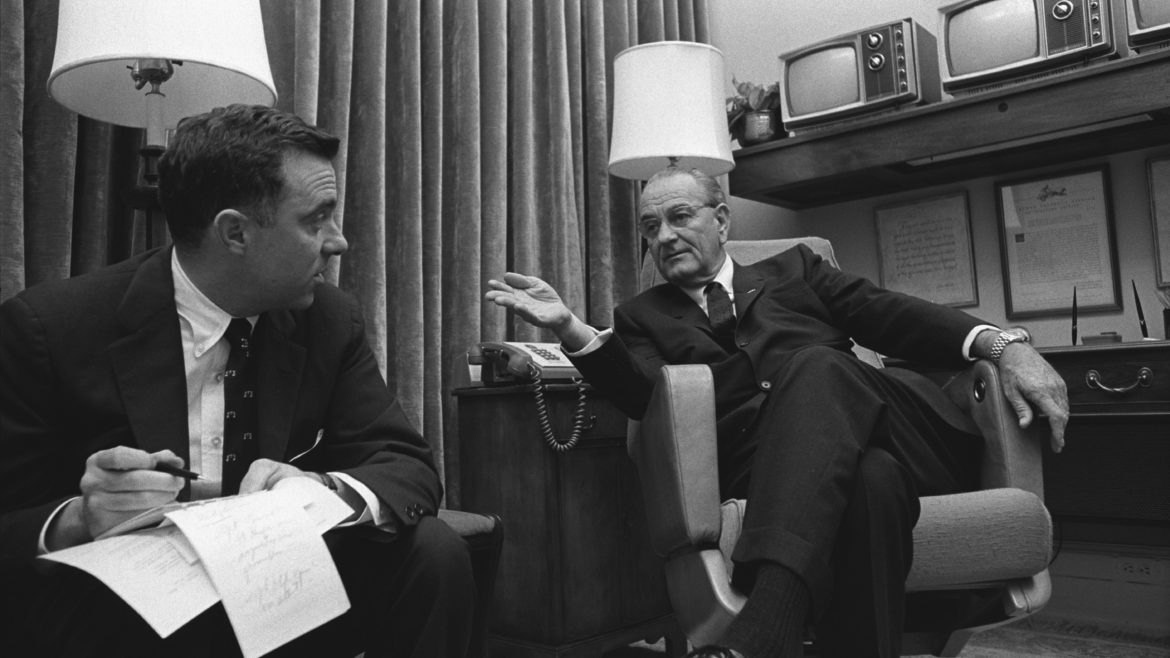 Joseph Califano works with President Johnson in the White House in 1968.

The Public Broadcasting Act was signed into law in November 1967, but President Lyndon Johnson began laying the groundwork for congressional passage months earlier. Joseph Califano, who was Johnson’s chief assistant for domestic affairs from 1965 to 1969, helped draft the bill that the White House sent to Capitol Hill in February 1967. Legislation creating the Corporation for Public Broadcasting was introduced as a measure to extend Johnson’s agenda for education to a new medium and ensure that “the public interest be fully served through the public’s airwaves.”

During a Feb. 27 keynote address at the Public Media Summit, convened by America’s Public Television Stations, Califano described Johnson’s vision for CPB to support the growth and development of noncommercial television and radio stations. The system that exists today fulfills hopes that Johnson and Republican colleagues such as Milton Eisenhower had for the new service, he said.

Califano spoke after receiving APTS’s Champion of Public Broadcasting Award, and elaborated on public media’s role as a unifying force for America’s diverse society. This excerpt has been edited for style and clarity.

Fifty years ago almost to the day, on Feb. 28, 1967, President Lyndon Johnson sent a special message to Congress on education and health in America. In it he described the Public Broadcasting Act he sent to Congress the next day.

As was his custom — a decidedly humble one by today’s presidential standards — LBJ first touted three of the education bills that he had proposed and Congress had already passed: the Higher Education Act, the Elementary and Secondary Education Act, and the Vocational Education Act. He discussed the critical importance of these and other initiatives. All of that to set the stage for the importance of the public broadcasting legislation he was proposing. 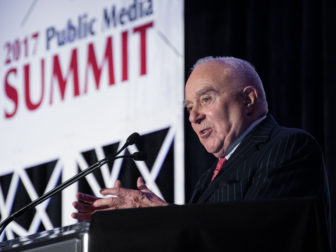 He stressed the need for a law to create a Corporation for Public Broadcasting to “provide support to noncommercial television and radio.” He proposed a board of 15 members, to be appointed by the president and confirmed by the Senate — and not more than eight from the same party. (Today the board has nine members, no more than five from same party.) He wanted CPB board members to be “American leaders in education, communications and the creative arts.” He saw the strength of public television and radio in their local diversity with “every region and every community challenged to contribute its best.” He wanted the corporation to support production centers and help local stations. He saw opportunities for “vocational training for young people who desire careers in public television.” He wanted the corporation to explore the use of “communication satellites to establish an educational television and radio network.”

In his message, Johnson repeated this thought from his earlier 1967 State of the Union Message: “Noncommercial television and radio in America, even though supported by federal funds, must be absolutely free from any federal government interference over programming. As I said in the State of the Union Message, ‘We should insist that the public interest be fully served through the public’s airwaves.’” He insisted that the Corporation for Public Broadcasting and the stations solicit and accept funds from other sources public and private.

Today there are more than 350 public television stations and more than 1,000 public radio stations. What an important asset public broadcasting has become for our people and our freedom.

Earlier, in 1951, the Federal Communications Commission had set aside the first television channels for noncommercial broadcasting, declaring at that time, “The public interest will be clearly served if these stations contribute significantly to the educational process of the nation.” The first educational television station went on the air in 1953 and a number followed. LBJ considered those efforts inadequate for the needs of a rapidly growing nation, particularly paltry in developing noncommercial radio and television in localities across the country. He had been interested in creating noncommercial television and radio while serving in the Senate, where he encouraged the Carnegie Foundation to establish a commission on the subject. As president, he based his proposal for CPB on the work of that bipartisan commission.

Only eight months after President Johnson sent his message — a period that included the House and Senate taking a few months off for holidays and their August recess — Congress enacted the legislation with overwhelming bipartisan support and the backing of the only three commercial networks at that time, ABC, CBS and NBC. On Nov. 7, 1967, LBJ signed the legislation into law in the East Room at the White House. During the signing he said that the Public Broadcasting Act “announces to the world that our nation wants more than just material wealth … more than a chicken in every pot. We in America have an appetite for excellence, too.” He continued:

While we work every day to produce new goods and to create new wealth, we want most of all to enrich man’s spirit.

That is the purpose of this Act.

It will give a wider and stronger voice to educational radio and television by providing new funds … and most importantly it will create a new institution: the Corporation for Public Broadcasting.

Johnson saw the Corporation as an instrument to assist local stations and producers who aim to offer the best in good music, exciting plays and reports of what was going on locally, nationally and internationally.

“It will get support from our government,” Johnson said, “but it will be carefully guarded from government or from party control. It will be free, and it will be independent, and it will belong to all our people…. At its best, public television would help make our nation a replica of the old Greek marketplace, where public affairs took place in view of all the citizens.”

The first person LBJ nominated as a director was Republican Milton Eisenhower. Years earlier Eisenhower had chaired the first citizens’ committee to seek allocation of airwaves for educational purposes and had discussed the idea with the then-Senator from Texas, Lyndon Johnson.

Look at what the visionary men and women of those early years of public broadcasting, Republican and Democrat, have achieved! Today there are more than 350 public television stations and more than 1,000 public radio stations. What an important asset public broadcasting has become for our people and our freedom. 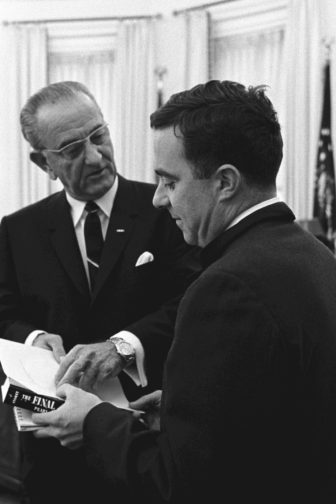 President Johnson talks with Califano in the Oval Office in 1968.

Once upon a time in America — so long ago that most citizens probably don’t know it — commercial broadcasters were subject to a Fairness Doctrine that required covering opposing political positions fairly; an equal-time law which required that when presidents gave speeches, the opposing party got equal time to respond; and an obligation — even for top-40 rock stations — to give a certain amount of attention to news. Those days and laws are long gone.

What would we do without public television and national public radio? Today the intense commercial broadcasting contest to attract eyeballs for ratings triggers a when-it-bleeds-it-leads doctrine for local news and a sensational pop-magazine superficiality for most national network news.

Sure, we have 24-hour cable news channels. With them we rarely have to listen to anything that doesn’t echo what we agree with or want to hear shouted. On the right, there’s Fox. On the left, CNN. Further left, MSNBC. The only broadcasting channels where you can find an hour of serious national and international news — and conversations among individuals with different viewpoints who aren’t screaming at each other — are PBS and NPR stations. Millions of Americans everywhere can wake up to NPR’s Morning Edition, drive home listening to All Things Considered and sit down when they get there to watch the PBS NewsHour.

As local newspapers are dying for lack of advertising, the best hope for serious local news is the various local TV and radio stations that are part of the public broadcasting system. Think how important this is for honest government.

And think about culture and education — the theater, dance and opera available on public broadcasting. No one else broadcasts the Metropolitan Opera or Masterpiece for free. Without public television, only those with wallets thick enough to buy expensive tickets to New York theaters could see and listen to shows like that. And public TV has educated millions of children and teens across the country for the past half-century.

Three things stand out most for me about how valuable you and your stations, and the system of public broadcasting, are:

I wish Lyndon Johnson and Milton Eisenhower were alive today to see what you have done. Each of you in your own way, and all of you together, have captured the spirit of their hopes for bringing art, culture, education and news to every corner of our nation. What you have delivered exceeds their most ambitious dreams for a free public broadcasting system, available to every farmer on a tractor, every citizen with a cellphone in every state in our union, every home with a television set and car with a radio, whether in a village in Alaska, an inlet in Hawaii, a town in Iowa, Arizona, Idaho or Alabama, or an island off the coast of Maine or South Carolina.

Citizens at the grassroots love public broadcasting. They value its contributions to their quality of life. They know an incredible bargain for taxpayers when they see one.

Public broadcasting faces another attempt to kill its federal support. We’ve heard this song before. Richard Nixon sang it in the 1970s. Newt Gingrich sang in the ’90s. But we turned such atonal singing off, and millions across the country learned how it resembled the sound of a political fingernail scratching on a dusty blackboard.

Why did we win? We won because citizens at the grassroots love public broadcasting. They value its contributions to their quality of life. They know an incredible bargain for taxpayers when they see one. If we mobilize these citizens, I know we will win again, and our priceless public media — PBS, NPR and their newer digital services — will continue to enrich our national life, and the personal lives of citizens in every nook and cranny of our country, for many, many generations to come.

Thank you all for what you have done, and what you will continue to do.

Joseph A. Califano Jr. was President Lyndon Johnson’s chief assistant for domestic affairs from 1965 to 1969, and secretary of Health, Education, and Welfare from 1977 to 1979. He is founder and chair emeritus of the National Center on Addiction and Substance Abuse at Columbia University.